THE GOOD, THE BLAND, & THE UGLY — THREE STEPHEN KING ADAPTATIONS 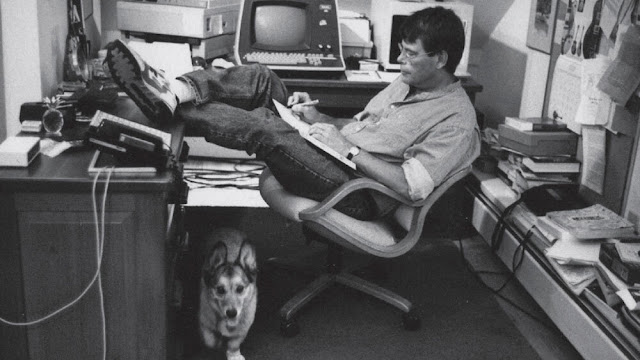 Have you guys heard of Stephen King? He's the one who wrote that book about the evil car that shits out a monster bat.

Just joshin'. Of course you know who Stephen King is. The man isn't just the most prolific and well-known author of all time, but so many adaptations have been made of his work that by now he warrants having his own streaming service. Like the books themselves, some of these adaptations are brilliant and some are lousy. The three titles below represent every stop on the quality spectrum, with one of them netting an Academy Award and the other netting something like 37 sequels, all equally terrible. Though studios continue pumping out movies and television series based on his works on a yearly basis, it makes sense that the most infamous adaptations are based on his most infamous stories, like the ones below, all of which were written more than thirty years ago. 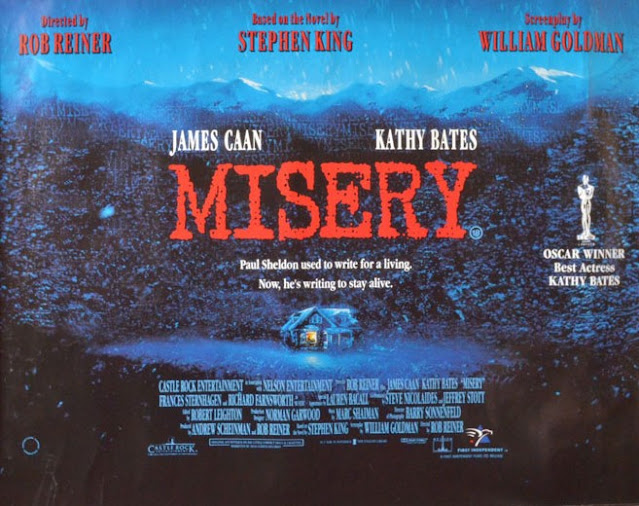 Misery is probably in the top five of all-time best Stephen King flicks. Directed by Rob Reiner, who found similar acclaim with his adaptation of King’s “The Body” as Stand By Me, it’s an absolute classic and an astounding example of what the genre can do with an original concept and horror centered around adults. King’s novel, written from the point of view of an author known very much for one style of writing and the fears of how his fan base will react should he ever venture into new territory, was obviously a personal work, but Reiner took great care of that concept and transplanted it into an adaptation that honors that fear while guiding it into a remarkable finish with little hints of gallows humor.

Kathy Bates won the Oscar for her portrayal of the deranged Annie Wilkes, and rightfully so, because she’s astounding to watch. Every line of hers is quotable, and impeccably and specifically delivered; her ability to propel from sweet and aloof to manically unhinged is an absolute marvel. James Caan, too, excels with the material, managing to overcome being confined to a bed for 90% of his performance, and even after having seen Misery a dozen times, his final fight scene with the murderous Annie Wilkes is still nerve racking.

The special effects by KNB, though seldom used, stand the test of time, and between the staging of the gags and Reiner's direction, there's no way you don't feel the phantom pain of seeing Paul Sheldon's ankle take that cracking shot with Annie's sledgehammer. It's probably one of the least intricate special effect in all of horror cinema but it's up there as the most effective.

Bates would go on to star in another King adaptation, Dolores Claiborne—one every bit as good as Misery (and my all-time favorite King-penned movie) but not nearly as celebrated—and while her take on another murderous madam was just as powerful, it was still no Annie Wilkes. 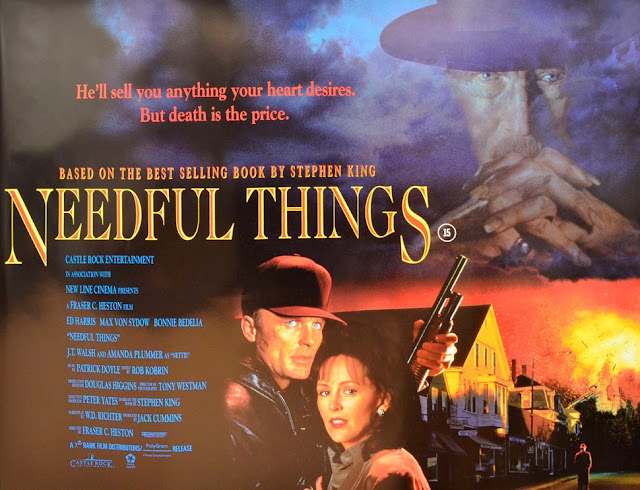 When Kino announced their 2015 Blu-ray release for Needful Things, collectors everywhere immediately demanded it include the long sought-after 187-minute cut that has never been available on any physical format, but was often broadcast on television during the late 90s. If you've read even a handful of King's most celebrated novels, at least one of them was probably well over a thousand pages. King has been called many things, and certainly indulgent among them, but when these certain intimidating novels include The Stand (miniseries review here) and IT (reviews of the two-volume adaptation here and here), then more power to him. Needful Things is one of those brick-girth but excellent books, weighing in at 700 pages, so you can imagine a two hour edit doesn't exactly cover the multiple subplots that were originally included in the novel, or the subsequent extended cut. Sadly, despite Kino's best intentions, that longer cut could not be secured. (In keeping with unnecessarily complicated American copyright law, rights to the elongated television version reside entirely with another studio—likely Warner Bros., who own a lion's share of King's film and television adaptations, and who are infamous for not licensing their material to any secondary distributors.)
Having said that, and when taken at face value only for what it is as opposed to what inspired it, Needful Things is an entertaining, well-acted and surprisingly trashy good time with a varied but impressive cast that the finished product ultimately doesn't deserve. Max von Sydow is having more fun hamming it up than anyone else in the cast, except maybe for the tremendous J.T. Walsh, whose first appearance has him literally chomping on an unlit cigar. Von Sydow's charming, yellow-teethed Leland Gaunt is flamboyantly and shamelessly evil, and the dialogue that slithers out of his mouth borders on revealing a more...let's call it satanic identity. Ed Harris is also on hand providing one of his better performance (in a long career of excellent ones), playing the role of Sheriff Alan Pangborn, one of the many reoccurring characters in what King has called his "Castle Rock" series. (Michael Rooker of The Walking Dead and Scott Glenn of The Silence of the Lambs played the character in George Romero's adaptation, The Dark Half, and the first season of Hulu's Castle Rock, respectively.) Though there are multiple subplots involving certain townspeople's interactions and transactions within Gaunt's Needful Things store, Pangborn is the connective tissue that unites their ensuing conflicts and provides a backbone for the story. His last-act monologue about greed and hate rivals Bill Pullman's rousing speech from Independence Day in terms of how utter cheese can still manage to sound cinematically satisfying.
It's not often that a great cast can come together to overcome a weak presentation, but that's exactly what occurs with Needful Things. Strong performances without a single weak one to sully the bunch, along with a strong searing score by Patrick Doyle, elevate a presentation harmed but not deadened by its shortened running time.
Needful Things ranks somewhere in the middle of the Stephen King adaptation pantheon. It's no Stand by Me or The Shining, but it's certainly no Dreamcatcher. Two hours of screen time harvested from seven hundred pages of material still manages to provide a reasonable amount of entertainment, despite many more characters, their motivations, and their subplots being left on the cutting room floor. Here's hoping that the white whale of the extended cut one day makes it to video, or even better, the novel is revisited for a second pass by a premium cable channel and turned into a limited series. 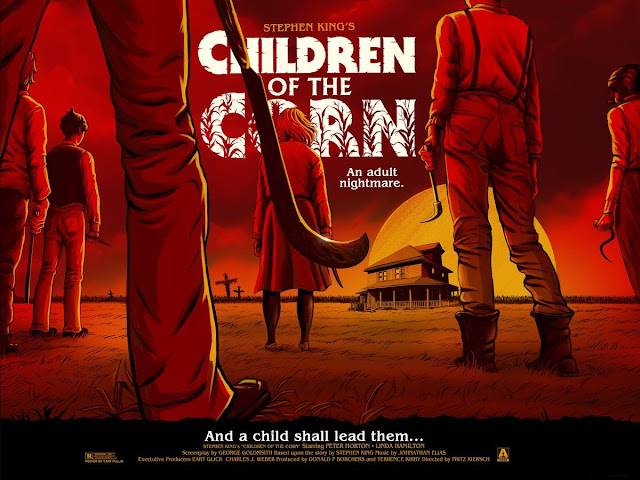 Did you know there are eleven Children of the Corns?
ELEVEN!
The latest was 2020's Children of the Corn, a prequel written and directed by Equilibrium's Kurt Wimmer, which was both shot in Australia and released in select theaters during the COVID-19 pandemic.
And people WENT TO SEE IT.
Children of the Corn ELEVEN.
During a PANDEMIC.
For a good stretch of time, Dimension Films held the rights to the series and were responsible for seven direct-to-video sequels until the Weinstein scandal bankrupted their genre-based distribution arm and Lionsgate absorbed their library. Before that happened, they'd spent years trying to do a "proper" remake, but for some reason could never crack the definitive take on a story about murderous kids worshipping a corn god. (A remake was made for television, directed by the producer of the original, which by all accounts is one of the worst in the series, and who by all accounts was a real son of a bitch on set.)
The general understanding of long-running horror franchises is this: once there are enough sequels or remakes weighing down the series, the original is then looked at and proclaimed to be “the only good one” or “the best” by default. This is true with Halloween or A Nightmare on Elm Street. This is arguably true with Hellraiser. This is not at all true with Children of the Corn, because in spite of all the sequels that hit video store shelves over the years and plumbed the depths of stupidity, the original is still basically very stupid. The aforementioned logline — murderous kids worshipping a corn god — still applies, and if you're one of those people who disses the sequels while praising the original, you're really not doing yourself any favors as they're all equally pedestrian. (Having said that, I've always admittedly been taken with Children of the Corn 7: Revelation, which is more of a moody and abstract experimental piece than a proper Children of the Corn sequel, and as you watch, you can sense it's one of those situations where Dimension Films purchased an original script and crammed some corn into it, which was along the same lines of their philosophy with the Hellraiser franchise while they still owned it — cramming in Pinhead, that is, not corn.) And as you watch full scenes of Linda Hamilton singing and dancing in a hotel room, or R.G. Armstrong wandering around his desolate garage for an eternity looking for creepy kids, you will know beyond a doubt that this feature-length film is based only on a short story. A very short story.
Even aesthetically, Children of the Corn is not an attractive film to look at, existing in that mid-'80s landscape where everything is blown out and soft, such as the opening diner massacre or when Armstrong makes his appearance as — you guessed it — an irascible old man. The movie doesn't contain any kind of directorial flair from Fritz Kiersch at all, and it probably won't surprise you to hear his body of work is rather limited, with Children of the Corn being the title to carry the most recognition.
The most notable thing about Children of the Corn is its inclusion of a lot of familiar faces who would then go on to immediately appear in much more notable genre films: Linda Hamilton in The Terminator, Robby Kiger in The Monster Squad, John Philbin in The Return of the Living Dead, even Courtney Gains in The ‘Burbs. (This DTV series would also attract a lot of famous actors before they were famous. Chief among them are Charlize Theron in Children of the Corn 3: Urban Harvest, Naomi Watts in Children of the Corn 4: The Gathering, and Eva Mendez in Children of the Corn 5: Fields of Terror. The series would, also, and sadly, attract actors after they were famous, like Nancy Allen and Stacy Keach in Children of the Corn 666: Isaac's Return, Michael Ironside in Children of the Corn 7: Revelations, Billy Drago in Children of the Corn 8: Genesis, and Clu Gulagher in Children of the Corn 9: Runaway. They must love corn!)
Despite my detailed slandering, I'll still acknowledge that Children of the Corn must have its fans, due to its longevity and it's very long sequel roster, so if you're one of them, don’t be a cornball—embrace your corn love. You’ll feel corny if you don’t. Don’t forget the popcorn, okay? (Corn.)