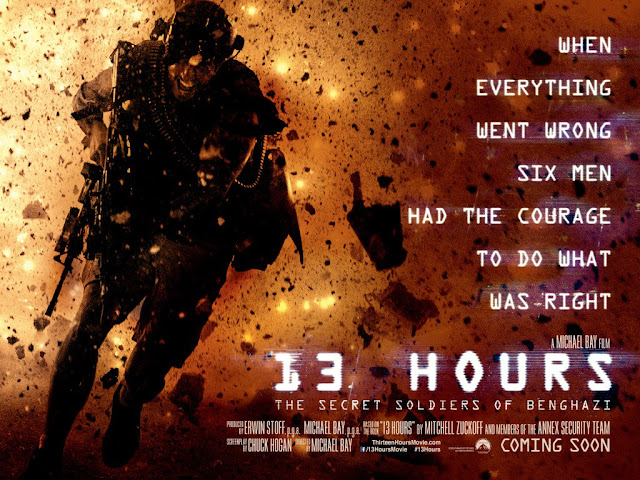 A Michael Bay film about the Benghazi attack and subsequent death of Ambassador Chris Stevens sounds like one of those things that shouldn't work. In a satirical skit about the dumbing down of America, a character would joke about wanting to go see Michael Bay's new film, "9/11: The Movie," in which a CGI American flag destroys every evil terrorist from sea to shining sea. And while that's perhaps a bit unfair, it's also kind of not, because this is the reputation Michael Bay has created for himself, all while working for the same Hollywood system that's entirely open to taking a real-world tragedy and turning it into profitable exploitation. We've had Twin Tower films, Osama Bin Laden assassination films, hijacked 9/11 plane films, and with 13 Hours: The Secret Soldiers of Benghazi, we have the Benghazi film – the worst terrorist attack the United States has suffered since September 11, 2001. And the mere idea of Michael Bay announcing such a film was the stuff of cynical eye-rolls and immediate dismissals.

In Hollywood, there’s an understanding that directors with prestige are, and generally should be, the ones to bring such real-life tragedies to life; i.e., Steven Spielberg with Schinder’s List or Paul Greengrass’s United 93. Though whether or not such true-life horrors becoming fodder for movie theaters is a tasteless move is constantly up for debate, but if they’re going to be made, it’s best they’re helmed by people with a history for quality output and adept at presenting real human drama.

Using his money-printing Transformers series as clout, Michael Bay – the director of five films (so far) about robots turning into other robots and fighting evil robots from outer space (all while destroying Chicago) – elbowed his way to the front of the line to helm 13 Hours: The Secret Soldiers of Benghazi. Though it does contain the same kind of violent, operatic destruction for which Michael Bay has been known since his directorial debut, it also contains something a bit unexpected and absolutely welcome: a bit of restraint from the director of Bad Boys 2, as well as a bit of maturity.

Make no mistake – though screenwriter Chuck Hogan (The Strain) was the one to adapt the nonfiction book by Mitchell Zuckoff and the Annex Soldiers, the script still manages to fall victim to the usual Michael Bay-isms. Though based on very real men, characterization falls by the wayside. Played by lesser known actors (which works to the film's benefit), each soldier is given a modicum of background and some personality quirks to differentiate who everyone is, but except for lead soldier (as presented by the film) Jack Silva, played by The Office's John Krasinski, the men's identities are tough to distinguish. 'Boon' (also The Office's David Denman) reads books. 'Tanto' (Pablo Schreiber) cracks jokes. 'Rone' (James Badge Dale) seems to really like war. These could very well be close to the real men, but their translation to the screen filters out much of their needed characterization. Bay, to his credit, does manage to include a handful of scenes in which the men either talk about or communicate via Skype with their wives and children (one of these instances, taking place at a fast good drive-through, is actually one of the best and most human moments Bay has ever directed), but once shit hits the fan and everyone is covered in soot, it's legitimately confusing at times to see through the black faces and heavy beards and figure out just who is who at any moment.

And again, being that this is a Michael Bay film, scenes striving toward drama can border on the overwrought, overly patriotic, and emotionally manipulative. Silva hasn't been at the annex for five minutes before he's sitting alone on his bed and thinking about his family in flashback form. We can fault a somewhat clunky script (which sports no less than six sarcastic uses of the word "fun") containing some truly heinous dialogue, as well as an odd amount of jokes that never seem to gel with the very serious conflict in which the soldiers soon find themselves engaged. (I wasn't there so I can only speculate, but if the real soldiers made at least half these jokes during the actual firefights, then I am speechless.)

Still, the shortcomings of the script are counteracted by Bay's extravagant yet restrained – and at times, downright graceful – direction. His quick-cutting style is severely dialed down, replaced by gorgeous sweeping exterior shots of the conflict as it's unfolding. He also resurrects his “bomb POV” shot from 2001’s recklessly stupid Pearl Harbor, in which the camera tracks with a bomb released by its aircraft and follows it down, watching it whirl through the air until landing near its intended target. It’s less Bay cribbing from himself and more his acknowledgment that whether here or abroad, war has to begin and end somewhere – and that includes conflicts we understand, like World War II, or those still mired in questions and controversy, much like our unending wars in Iraq and Afghanistan. The cinematography by Dion Beebee eschews Bay's normal living painting style in favor of ground-zero witnessing, relying on scurrying handheld cameras to put the audience directly in the middle of the fight. It's been done before, of course, but not by Bay, and seeing him employ its use forces you to examine him as not just a director, but a filmmaker.

Did you see what I just said??

It's a shame that 13 Hours didn't do well financially at the box office, as not only was this a film that more people needed to see, but it just seems like one more nail in the coffin for directors leaving their comfort zone to make something "important" before heading back to their franchises and brand names that print money while killing brain cells. Better than your typical Michael Bay fare, but not in the same league as other relevant modern films The Hurt Locker, Zero Dark Thirty, or United 93, 13 Hours presents a refreshingly Michael Bay-lite take on a very true story. As to be expected, the action scenes are phenomenal (while thankfully managing to skirt political agenda), a somewhat clunky script and uneven tone are what holds back 13 Hours from the kind of prestige its colleagues have gone on to earn. Removing the mindset that this was a true and horrific thing which really took place and examining it only as a piece of entertainment, 13 Hours makes for a thrilling, visceral, and unrelenting experience and perhaps even one of the best action films of the 2010s.