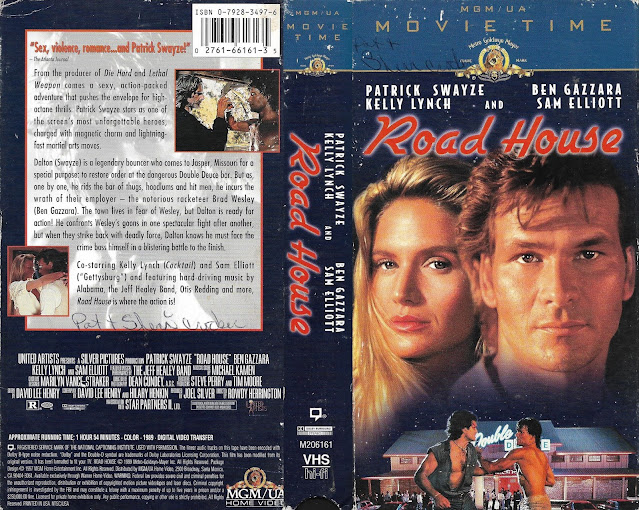 If the dictionary were a living, breathing, human man and you asked him to define “road house,” he would tell you that it was a roadside establishment in a country setting, off the beaten path, where one could seek alcohol, music, dancing, and perhaps some gambling. However, if you were to ask me — an actual living, breathing, human man — to define “road house,” I would tell you, “It’s the greatest film of all time, chicken dick.”

Road House is the kind of film that (wrongly) doesn’t feel like it belongs in Patrick Swayze’s filmography. More well-known for his contributions to the date-movie genre — Ghost, Dirty Dancing — or his closeted sobbing pedophile genre — Donnie Darko, possibly Fatherhood — and certainly not to speak ill of the dead, but Road House‘s joyous, unfettered insanity and manliness feels more like a Kurt Russell vehicle than a Patrick Swayze one. (Kurt Russell was a handy example because for the first fifteen years of my life, I was convinced they were the same person. Watch Road House and Tango & Cash back-to-back and tell me I’m wrong.) Sure, Swayze tussled in the action genre with Next of Kin, Red Dawn, Black Dog, the immeasurable if equally absurd Point Break, and that one which was clearly a Mad Max rip-off, but none of them ever caught fire like Road House did. And none of them have its rewatchability, or its strange uneven tone, or its amount of Red West.

Frankly, it’s kind of a shame that even after having contributed three mainstays of the action genre with slightly ironic classics that Swayze couldn’t find surer footing with future solid action fare. For as celebrated as they are today, that Road House, Red Dawn, and Point Break didn’t solidify Swayze as at least an action semi-icon seems strange, but perhaps it was his ability to visit several different genres (often for the ladies) that made such an action-icon status elude him. Based on what kind of person he was, he would have really been tickled to have his name spoken in the same breath as Schwarzenegger and Stallone. Sadly, his last most high-profile film project was a cameo in the Dirty Dancing sequel no one asked for.

Road House is a tough film to explain to those who haven’t seen it, and not because the plot can’t be cracked, because it certainly can — it’s a 1989 modern western which sees Swayze’s Dalton, he of the mysterious past, cleaning up a corrupt town and sending a handful of good-ol’-boys to their earth boxes pushing up daisies. No, what can’t be cracked is the extremely odd tone, which bounces back and forth between the kind of fun-and-fancy-freeness indicative of the ’80s and a sort of angry viciousness that never seems to gel. [Spoiler: The most telling example of this comes in the dispatching of the film’s primary villain, Wesley, as played by Ben Gazzara, in which members of the town he’s been victimizing kill him in cold blood. He’s shot full of holes and dies bloodily, but then everyone laughs when an idiot among them makes a stupid comment about a stuffed bear.]  However, admittedly, it’s this same uneven tone that makes Road House such an entertaining watch. Having fun while spilling blood, being sexually explicit while also trying to be romantic, Road House plays by its own rules, with incredible results.

Road House has become a midnight movie in recent years, as people have begun to embrace the sheer lunacy brought on by a film that has so much going on you don’t know where to look. A direct-to-video sequel was released in 2006, starring a cast of actors who generally only appear in direct-to-video sequels, while a remake with Ronda Rousey stepping into Dalton’s shoes (lordy) under the direction of The Notebook’s Nick Cassavetes (lordy) has been threatening to emerge since 2017. What all this means is the Road House name still means something, and using that simple two-word title suggests to the audience a certain kind of experience, successful or not: uncorrupted ass-kicking. 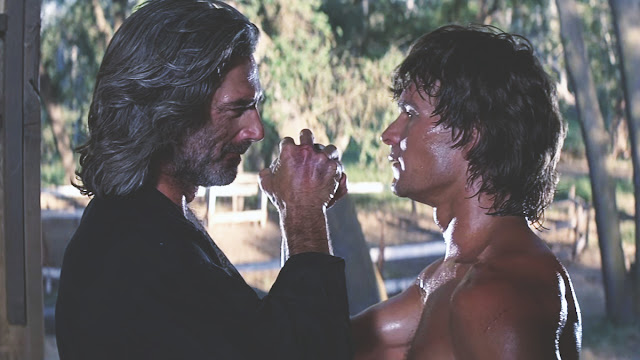 I sincerely doubt there’s anyone reading this who hasn’t seen Road House by now, but if you haven’t, that’s likely why you aren’t realizing just how empty your life has been. Once you see Road House for yourself, you will then realize you haven’t fully lived. Road House isn’t a “good” film — not by any stretch — but it is a damn fine time, with all the fight scenes, sexytime, cartoon villainy, and Sam Elliott you can stand. A great soundtrack, some rafters-shooting performances, and a strange tone of broad comedy meets disturbing violence make Road House a unique experience and an essential missing component of your life.

Patrick Swayze’s wife shared that in his final weeks of life, he’d expressed fear that he wouldn’t leave behind a legacy that would still have people talking about him long after he was gone. He, like the rest of us, was afraid he hadn’t left a mark on this world, and that he’d be forgotten. Anyone could have pointed to a half-dozen titles in his career that would ensure such a thing would never happen, regardless of which genre they prefer. But when it comes to Road House, one thing is for certain: his character Dalton (first name or surname, we’ll never know) will long be held in high regard as one of the most infamous and celebrated action heroes of all time.

Now that’s a legacy worth leaving behind.