The Child’s Play series has been one wild ride. After the classic, humorless first film, the series – like most horror franchises – devolved into your more typical slice and dice (though I unabashedly love Child’s Play 2). After exhausting its straight-up horror experience, series writer Don Mancini (who also directed the three most recent entries) served up a mini-reboot with 1998’s Bride of Chucky, directed by Freddy vs. Jason’s Ronny Yu, which allowed the series to deviate in a more knowingly comical manner. Things got meta with Seed of Chucky, which saw a Hollywood film being made about the “real” killer doll’s exploits, and once John Waters’ face melted off, and, in a gag that hasn’t aged well, Chucky ran Britney Spears’ car off a cliff, it seemed like the series had found itself in a creative corner.

Well, Mancini took the opportunity to, again, softly reboot the series with 2013’s Curse of Chucky, which dropped the broad humor, the meta winking, and everything Jennifer Tilly, steering the series back to the darker tone established by the original trilogy. It was a worthy effort, and certainly better than Child’s Play 3 and Seed of Chucky, but it wasn’t quite a return to form. Still, Chucky voice actor Brad Dourif was back, and his real-life daughter, Fiona Dourif, played the lead “final girl” and became quickly beloved by fans, so it had some positive things to offer. 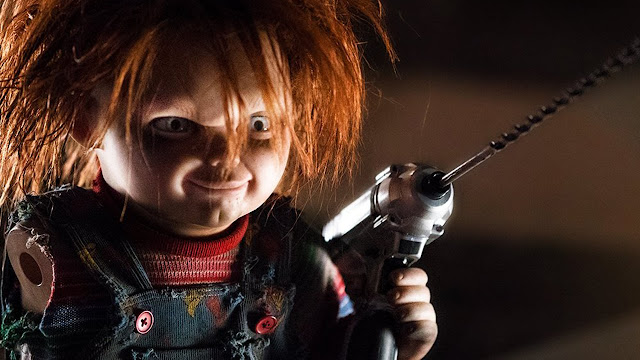 Cult of Chucky serves as a direct sequel to that film, and just might be the most ridiculous and insane entry so far (and I am totally including Seed of Chucky in that – ya know, the film in which two plastic killer dolls give birth to a child doll while rapper Redman is directing a fake movie about their lives). Original Andy Barclay (Alex Vincent, making a return to the series after 28 years) is back, and he’s keeping a living Chucky doll head in his isolated cabin home for nightly torture sessions. And Jennifer Tilly is back as well, again playing Tiffany, murderous girlfriend of Charles Lee Ray (or, maybe she’s just playing Jennifer Tilly. Who knew a horror series about a killer doll could get so esoteric?).

It’s also strikingly directed. Mancini, who wrote several episodes of NBC’s short-lived Hannibal series (“I can’t believe they canceled that show,” Chucky grumbles at some point), embraced that series’ ultra-pretentious approach. Cult of Chucky is the most interesting looking film in the series – one might go as far as saying artfully directed  –  with one murder sequence in particular looking straight-up Hannibal inspired. Cult of Chucky actually looks phenomenal, and Mancini’s earlier mentioned Hannibal-inspired directing is largely to credit for that. Cult of Chucky takes place in the fanciest and most aesthetically pleasing asylum ever in cinema. It’s very white and institutional, but without being depressing, and everything is meticulously designed. 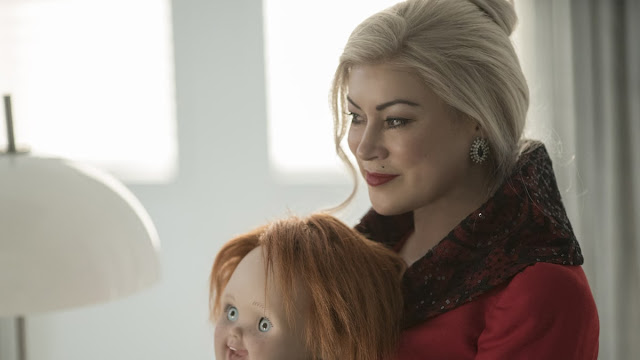 Cult of Chucky is also often very funny, mostly deriving from Chucky’s one-liners, which completely dwarf any that have come before. Dourif has been voicing this character for thirty years now and hasn’t lost his spark — not to mention gaining creative mileage from the asylum setting, a clear callback to the actor’s Academy-Award winning appearance in One Flew Over the Cuckoo’s Nest. There are multiple references to this, from Juicy Fruit to Chucky outright mumbling half that film’s title in his typically profane manner. And like the previous films, the callbacks to other horror films are numerous, even including an unexpected nod to The Witch.

However, there are portions of Cult of Chucky that don’t work. Nearly all of the characters beyond Fiona are either inconsequential, irritating, or serve no purpose other than to make the loony bin loonier and eventually die bloody. The gore gags are great in concept but not in execution. Chucky looks cheap – not quite Spirit Halloween-cheap, but close. It’s appreciated that the film leans more on puppetry and practical effects than CGI, but its results are still unconvincing. The return of Alex Vincent promises something big, but after some really interesting implications are made regarding his post-Chucky psyche, his character plays out with no point whatsoever, except for setting up the inevitable next sequel – or TV series? (Although the post-credits stinger has me legit excited.) Jennifer Tilly, too, seems shoe-horned in, and with an especially off-kilter performance, as if her character’s appearance here is more about fan service, and the dispatching of one character in particular is more about tying up loose ends rather than creating drama. Lastly, Cult of Chucky alludes to a really interesting, psychologically-based new direction very early on, but what’s set up here doesn’t come to fruition by the end, resulting in a missed opportunity.

And speaking of “that end” – yeesh. 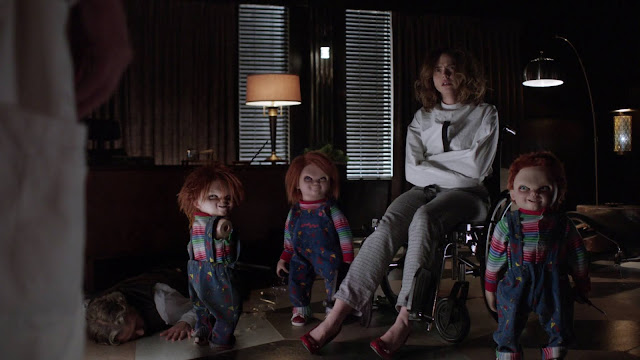 By now, Chucky is on his seventh entry and the series has gone direct to video. Budgets have been cut, and multiple concepts have been explored. And I can name several other horror franchises that became completely lifeless before their seventh entry. If Mancini is on board for Chucky 8: Your Soul, then of course I am, too. By now, Chucky has become a horror hero to audiences, almost the good guy. And you can’t keep a Good Guy down.

Chucky is back in a mostly enjoyable sequel — one that towers over the last two entries, at the very least. It explores new territory (without much explanation) and slowly ties back in earlier events from earlier films in an effort to group everyone together. Is the next Chucky sequel to come the one where they finally get it totally right? Probably not. But that probably won’t make it any less fun to watch.