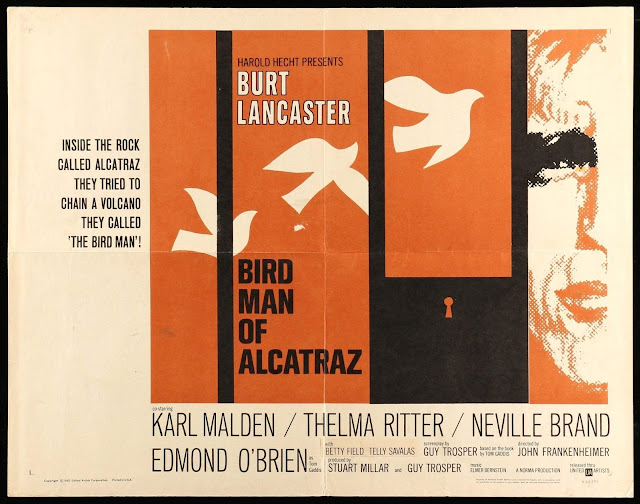 Robert Stroud (Burt Lancaster) was anything but a model prisoner when he was transferred to Leavenworth Federal Penitentiary in 1912. The first impression he made on his guards and fellow new-arrival inmates was smashing a window on the train, citing "he got hot." Once there, Stroud's behavior didn't exactly improve. After pushing his cellmate for his having touched a photo of Stroud's mother, he clocks another inmate during laundry detail. To complete the trifecta, Stroud stabs a guard to death after he tells him that his recent misbehavior has cost him a visitation with his mother. For this bloody infraction, he's charged with an additional five years of solitary confinement, after which he'll be hung until dead. However, after a plea of clemency from Stroud's mother to President Wilson, the death sentence is tossed out in favor of a life sentence in solitary confinement. After making enemies out of the crusty old warden (Karl Malden), Stroud resigns himself to a life that had already been promised to him: solitary. But on one rainy day when Stroud is taking a walk in the prison courtyard, he spies a starving sparrow in a nest, so he takes it inside to care for it...and for the next four decades, the ruthless, violent man that walked into Leavenworth Penitentiary will devote his life to the study of ornithology, even being called a "genius" by others in the field for his scholarly studies on bird disease, and by the time of his death, he will barely resemble the hardened criminal that bought him that one-way ticket to life behind bars.

Though it's often said that troubled productions lead to troubled films, Birdman of Alcatraz is anything but. Following the departure of original director Charles Crichton, John Frankenheimer signed on to finish the picture, and after two weeks, fired the original director of photography. Lastly, though star Lancaster and director Frankenheimer enjoyed a working relationship that yielded significant contributions to cinema, it was one that saw moments of tension and on-set confrontation. Despite all that, Birdman of Alcatraz is a remarkable end result of a tumultuous shoot. Though Frankenheimer would later go on to shoot "angrier" films, like The Manchurian Candidate and The French Connection II, here he imbues upon Birdman of Alcatraz, somewhat surprisingly, a soft, intimate, and inspiring touch. The audience's initial exposure to Robert Stroud has them meeting face-to-face a rather angry and care-nothing individual who seems to have no love for anything or anyone except his mother. But it's not soon after when Stroud's hardened heart begins to melt at the sight of the hungry chirping baby bird left abandoned in its nest during a rainstorm. Stroud carries the sparrow inside, nurses it back to health, and even teaches it tricks. Though the film was made during a time in which cameras were allowed to remain still and shots were allowed to linger, Frankenheimer opts to challenge his audience's patience even more by including a ninety-second close-up of a real hatching baby bird; except for a few removed frames, he allows his camera to capture the entire moment, including the freshly hatched bird wearing part of his broken shell as a hat. (Yeah, it's as adorable as you just imagined). And it's also a telling sign of what kind of film Frankenheimer wanted Birdman of Alcatraz to be: touching, gentle, and most of all, surprising. 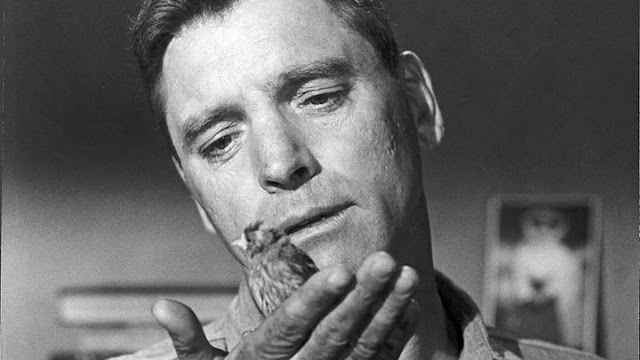 Burt Lancaster once again finds himself sporting old-age make-up and playing a despicable character who later in life comes to terms with the person he was and the mistakes he has made, his immediately previous role being Ernst Janning in Judgment at Nuremberg. His performance as Robert Stroud remains likely the high-watermark of his career.

Putting aside the rather obvious irony of Stroud's moniker (it was at Leavenworth where he kept his birds, not Alcatraz), the original book's author, Thomas E. Gaddis (depicted on-screen by actor Edmond O'Brien, who also narrates), presents a rather compelling portrait of a man hardened by life, but softened by something as mundane and every-day as a chirping bird. Gaddis is not a stranger to writing biographical material on dangerous or diabolical men who still manage to find redemption (his other co-written book, Killer: A Journal of Murder, comes highly recommended); the care he shows in fleshing out the legacies of his real-life subjects is also matched by his objectivity. There's no attempt to paint Stroud as misunderstood, or a victim of "the system" - Andy Dufresne he is not - which makes his transformation all the more inspiring and effective. (However, reception of this version of Stroud - both in Gaddis' book and Frankenheimer's film - was labeled as wholly inaccurate by fellow inmates who knew the real man. Even post-birds, allegedly the real Stroud remained "a jerk" for the rest of his life.) 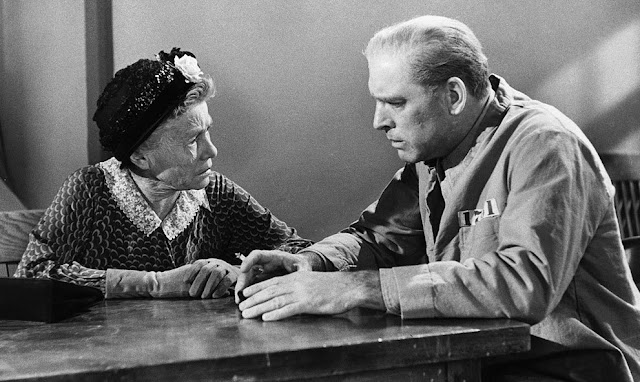 John Frankenheimer would go on to direct for an astounding forty years, luckily still able to craft at the very least exiting and entertaining fare like the Robert De Niro heist flick Ronin, though sadly his last feature film would be the remarkably stupid Reindeer Games. (He nearly directed an early iteration of what eventually became Dominion: Prequel to the Exorcist, directed by Paul Schrader...which eventually became Exorcist: The Beginning, completely reshot by Renny Harlin, before dying during pre-production). His filmography is a strong one, though many of his works are not nearly as well-known as what may also be the best film of his career - yes, even more so than The Manchurian Candidate. Forgive the pun: Birdman of Alcatraz soars to great heights.

It's easy to see the fingerprints of Birdman of Alcatraz all over more modern fare. Stephen King is likely a fan, as his short story "Rita Hayworth & The Shawshank Redemption" features an inmate carrying and caring for an injured bird (though in the original story it's not the Brooks we all know, love, and for whom we weep in the film version). The Green Mile has an inmate keeping a pet mouse in his cell, teaching it the same kind of tricks that Stroud did to his sparrow. Even Bill Murray manages to pay homage in the hokey but entertaining Charlie's Angels in the third act after he's locked up by a maniacal Sam Rockwell. When a filmmaker makes the best film of his career, or an actor manages to give his career-best performance, separately those are triumphs, but when those two come accomplishments come together, then history is made, and that's something to chirp about. (I'M SORRY.)