THE BOY WITH NO SHADOW: AN INTERVIEW WITH LONESOME WYATT 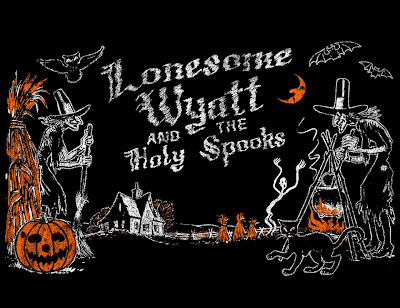 Lonesome Wyatt and The Holy Spooks are no stranger to The End of Summer. Having featured this delightfully dark musical act three times before, finding a new way to describe it/him/them is a fool’s errand. Fact is, I could very well use the whole “so and so meets the guy from this thing” and dozens of other lazy comparisons ad nauseum, but all I really need to say is this: Listen for yourself, because if you're not, I feel sorry for you. Though he made a name for himself with Those Poor Bastards, an act that infuses country and Americana with goth and darkness, it is as Lonesome Wyatt and The Holy Spooks where something clicked with me in a way that it feels legitimately special. Add a scratchy layer of vinyl grain and Wyatt’s music could easily sound as if it were plucked right out of the 1970s, where society seemed suddenly enamored with death, evil, and the very real possibility of the devil walking amongst us.

While on a break from touring, Wyatt was kind enough to answer a few questions about his newest release – “Halloween is Here” – his history with/as The Spooks, and his life as a seeker/celebrator of the morbid.


TEOS: I’ve listened to enough of your music (and read your first Edgar Switchblade misadventure) to recognize a fellow dark-side dwelling miscreant when I see one. What draws you to this odder road less traveled?

I suppose it all goes back to having a very secluded childhood with all those spooky cornfields rustling all the time. Too much solitude can make a fella a little strange. 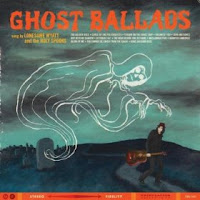 TEOS: Much of your music is really story-driven – something Johnny Cash was always known for – so I hear a lot of his approach, including the dark humor, in your work. I also hear occasional glimpses of Timber Timbre and Tom Waits.

Who else would you cite as an inspiration in your musical life? Was there a particular singer or songwriter, author, or perhaps filmmaker you may have discovered at a young age that made you realize this was what you wanted to do?

Growing up, I would say Scary Stories To Tell In The Dark and Gremlins were mostly to blame. I also remember getting a record called "Trick or Treat" by Oscar Brand from the library and that made a big impression on me. The songs were pretty goofy, but for some reason they really sent my tiny brain spinning.

TEOS: I can certainly appreciate your appreciation for the dark side and the supernatural. I've always been very intrigued by the paranormal. Tell me: how much of it do you believe? Do you believe in the existence of ghosts – in things beyond our understanding?

TEOS: You are constantly trying new things, yet wanting to remain in this dark playground where your imagination is at its most potent. At this point in your career, are you consistently trying to reach new fans, or satisfying the ones you’ve already earned?

I try not to think too much about reaching new fans or how the project will be received or any of that kind of stuff. Of course I hope some people will enjoy it, but it's beyond my control. It just cripples you and fills you with anxiety if you worry about that. I try to keep things pure and create whatever idea I become excited about at the time. Hopefully it connects with someone. 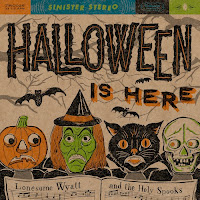 TEOS: Moving onto "Halloween is Here"... I admit, and I say this more as a fan and less as a critic, I was a little disappointed the first time I listened to the new album.  I was anticipating something beautiful, dark, and more musically driven like “Ghost Ballads” – one of the new tracks, “Such a Fright,” for instance, is along the lines of what I was expecting – but it was probably halfway through my second listen that I “got” it – and loved it – and I realized you had a different goal: Instead of just doing a flat-out musical record, create this kind of old-school Halloween party ambience with flamboyant lyrics and quirky descriptions. And you really do nail that idea, right down to the perfectly vintage-looking album artwork. What other templates were you following when you were putting together this album? Who were you honoring, if anyone in particular?

That's always the problem when listening to a new album by someone whose last album you enjoyed. Your brain gets thrown in a loop when it's different than you expected. I just didn't think having this album really serious and quiet would make any sense. I see Halloween as more of a party for horrible things than a somber or sad experience. The whole thing is a tribute to all those obscure Halloween albums from the 50's-80's. No one makes this kind of stuff anymore, so I thought it was important to try to carry on the tradition. Hopefully it's not too insulting to those mysterious gods of the past.


TEOS: Your previous album as Lonesome Wyatt and The Holy Spooks, “Ghost Ballads,” is likely your most story-driven yet. The first track, “The Golden Rule,” doesn’t really get lost in poetic hyperbole – it’s a rather straightforward ghost story set to some pretty beautifully dark music. Listening to "Halloween is Here," however, it's evident you really didn't take this same approach.

Not really. This album is very different from Ghost Ballads. I think the only similar song would be "Such a Fright." Otherwise, it's not really as soft or pretty sounding. I was inspired by old Halloween records and wanted to try to capture that strange energy a lot of them have. There's quite a bit of group singing on this one. It sounds like a gang of deformed monsters. The rest of the album has stories, which were inspired by great albums like "Scary Spooky Stories."  It's really for all ages of creeps.

It was also important to me to make it sound and look handcrafted and not mass-produced. We printed all of the record and CD jackets on vintage style chipboard paper and I hand numbered them. The illustration by Strange Fortune Design Co. is just perfect and creepily vintage. I really hate slick, glossy things. 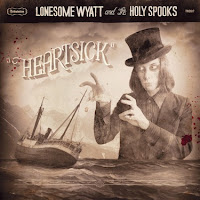 TEOS: Compared to previous Lonesome Wyatt releases, like “Heartsick,” for example, “Halloween is Here” has a sillier tone – not just in the content, but in the several songs where your vocals are accompanied by that sea of monstrous sounding voices you mentioned earlier. And on top of that, you add stories about werewolves suffering from depression, or kleptomaniac ghosts (from... Indiana). While the new album still has that patented Lonesome Wyatt darkness, it feels like you said, “Let’s just have some fun.” Was this a conscious choice? And if so, how early on in the realization did you know you just wanted to have a blast?

I just don't like doing the same album over and over. Ghost Ballads pretty much covered the gloomy horror, so I thought this one should me more rowdy and unhinged. It was my goal to create something that sounded like a bunch of crazy creatures having a celebration. I like to think of it as mentally ill rather than fun. Fun has some bad connotations.

TEOS: Probably my favorite aspect to the album is this kind of purposely implied feel that it’s something children would listen to at a party, but then at the same time some of the stories are pretty gruesome – especially “The Giant Fist.” So in a sense it sort of captures our fond recollections of Halloween (which more often than not stem back to our youth) and marries it to this kind of disturbing but quirky storyscape. It’s tough to explain but I think it makes the album that much more special – sort of a wolf in sheep’s clothing.

I'm glad you noticed that, pal. This is just the way I see Halloween. I think it should be both exciting and ridiculous, but also surreal and frightening. When you look at old Halloween decorations many of them were unnerving and disturbing, but now everything is smiling and cute. I don't like that at all. We need to return this holiday back to its peculiar roots. It should be full of creepy terror and graveyard thrills.

TEOS: What is it about October 31st that compelled you to construct an entire concept album around it?

I have always loved that odd Autumn feeling that blows through the air around Halloween. Everything is filled with death and wonder.

TEOS: When can we expect to see the first music video based on one of your Halloween songs? And if so, do you know which song you’ll be using?

Unfortunately, I don't think we'll have time for a music video with this one. There are just too many projects going on. It's a real shame. I think I have to slow down on all this stuff at some point.

TEOS: What does a typical Halloween night look for Lonesome Wyatt?

It's not a very pretty sight. I usually just stay at home and watch some horror movies on VHS and listen to Halloween records. As with most things, the idea of Halloween is much better than the stinking reality.


I thank Lonesome Wyatt for taking the time to discuss his new descent into madness, and I’m especially thankful for him having used Halloween as its backdrop. It’s always been my favorite night of the year for a multitude of reasons, but it seems that Halloween seems to be less celebrated and feel less important year after year. It’s starting to feel like those people who care about it belong to this very unpopular club that doesn’t have all that many members. So, my genuine thanks to LW for trying to contribute to it in some way in an effort to keep it going and keep people enthusiastic. 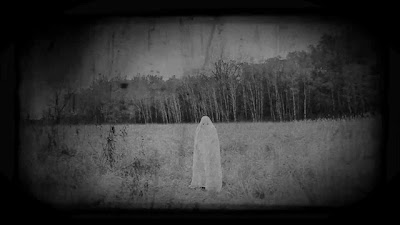 “Halloween is Here” can be purchased on (no it can't - sold out!), CD, and digital download directly at the official Lonesome Wyatt site, as well as your usual online retailers.
Posted by TEOS at 12:00 AM