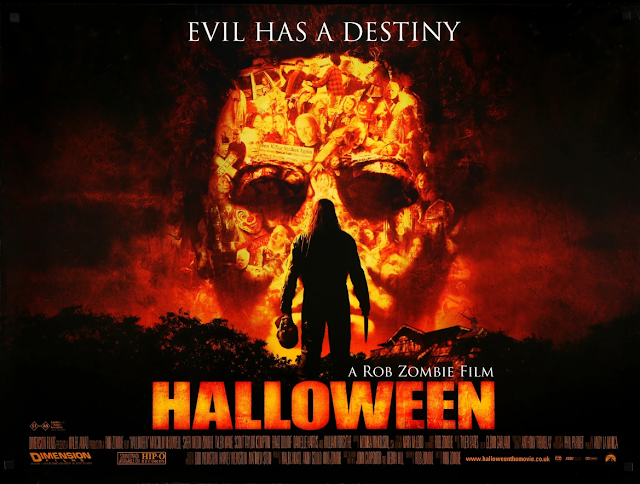 Then, one day, this happened:


THE WEINSTEINS
Rob Zombie, this is the Weinsteins.
Would you like to direct Halloween 9?

THE WEINSTEINS
But didn’t you famously say
that remakes were the worst
thing any filmmaker could do
and why would anyone ever
remake a movie that was
already perfect?

ROB ZOMBIE
Yeah, but that only applies to
people who aren't me. I’m an
artist.

THE WEINSTEINS
That’s true. Your stage show has
a lot of skeletons! What's your
pitch for a remake?
ROB ZOMBIE
Well, I'd tweak the original
story to make all the characters
repulsive and irredeemable white
trash so you have no one to root
for. I'd also add a lot more sex
moans and Clint Howard.

THE WEINSTEINS
We’ve never actually seen the
first film, but that all sounds
fine with us. We’re artists.

ROB ZOMBIE
Can I write the whole script myself?
I can spell and stuff. I know
ALL my letters. I’m an artist.

THE WEINSTEINS
We’ll leave you to it, as we’re
courting Michael Berryman to
star in the direct-to-video
Children of the Corn Something.


And off went the artist Rob Zombie, along with his unending supply of stupid hats, to grab his Motorhead crayons and write the script. Mr. Zomb had never before made a film that existed in someone else's universe, as he had been primarily used to setting his stories in a magical land called Slime's Depression, but he rolled up his sleeves and prepared to dive into the Halloween universe, which took place in a rather picturesque town called Haddonfield, Illinois. Wisely, Rob Zombie chose to maintain this setting, quickly adding it to his script to assuage the fears of Halloween fans everywhere that he had their best interests at heart, that he wasn't going to let them down, and that he definitely knew how to spell "Haddonfield."

Cheap shots aside (which I do not plan on ceasing), John Carpenter's original film is a subtle exercise is slow-burn suspense and terror. It is low on violence, even lower on blood, and features a cast of legitimately likable and sympathetic characters.

Rob Zombie's film contains none of those attributes. It is a loud, flashy, ugly, unapologetic rock concert filled with unnecessary gore, hateable characters, and an unnecessary retconning of Michael Myers' past. It is dumb. It is a film that endeavors to showcase psychological disorders, but is written by a man who knows absolutely nothing about them.
This same man knows even less about original screenwriting.
In Rob Zombie's Halloween, cops asks, "Whatta we got?" and receptionists say, "Go in, he's expecting you," and bullies make fun of mothers. Halloween 2007 exists because Rob Zombie watched a few movies on television and said, "I can probably pull this off." 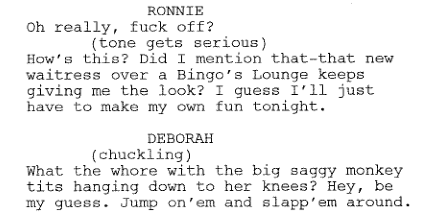 The "character" of Michael Myers, called The Shape in Carpenter/Hill's original script because he was never supposed to be a "character" but a mysterious force of evil, now has an all new backstory: his parents suck, his sister sucks, his life sucks, and he sucks. That's pretty much it. That's how Zombie decided to "explain" the boiling bloodlust of Michael Myers. That's Zombie's daring take on what makes someone become a killer: living in the lower tax bracket.

Then Michael goes to school, where bathroom bullies accost him and make absurd sexual threats about his mother and sister.
His mother, Deborah, who is a stripper at the Rabbit in Red Lounge (hey, someone rented the first movie at least once!) is having a meeting with the school principal and Dr. Loomis, a child psychologist. After the principal lets the cat out of the bag and tells Mrs. Myers her son is fucking nuts (by letting the dead cat out of his drawer [in a bag], get it?), she kinda believes him but not really.

Then Michael kills the bully kid from the Geico commercial, all the while the audience drowns in this overwhelming amount of explanation that Rob Zombie said he was going to provide for Micheal's back story.

Later, at Michael's house, everyone continues to be really mean. Even though his mother is fresh from a meeting in which she was shown the dead cat Michael had in his locker and the dozens of photos of animals he's killed, she shrugs it all off and lets him go trick-or-treating, anyway. She can't take him, though, because she's gotta work. And since the rest of his family hates him, looks like he's shit out of luck and shit out of trick-or-treating.

It then hilariously cuts to Michael sitting outside on a curb, looking immensely sad, as "Love Hurts" plays.

Upstairs, Michael's sister is in the seedy throes of pre-sex with her even seedier looking boyfriend. He takes out the iconic Shape mask and asks her if he can wear it while they bump uglies. She says no, much to my chagrin, as I would like this boy's face to go away forever.

And downstairs, Michael looks sad, eats some candy, and then thinks, "Oh, right, this is about when I go nuts for no reason."

This is exhausting, isn't it?

Michael proceeds to kill everyone and then shove a baseball bat up his dead sister's ass, because Rob Zombie once watched the original Halloween and said, "This is fucking boring – where's all the depravity?" The only one Michael doesn't kill is his infant sister, whom he calls Boo.

At times, Rob Zombie's Halloween fools you into thinking it's actually trying to be a good movie. Notable examples include the sequence where Mrs. Myers comes home to her massacred family, which is complemented with the numerous news reports being transmitted at the site. With every character on screen freeze-framing so the only things moving are the lights from the police cars and Michael himself, it's actually  — dare I say it — well-executed.

Likewise, the sequences of young Michael at Smith's Grove Sanitarium don't hurt, and even threaten to be interesting, but unfortunately not enough time is spent here. Everyone's acting is downplayed and actually good, including Zombie's generally not-so-good wife, and the layering of Loomis' audio notes over choppy 8mm footage of Michael under observation works pretty well, offering it a sad-documentary kind of feel.

These sequences are the biggest red herring in cinema, as you fool yourself into thinking the film isn't a total junkyard filled with needless backwoods profanities, unrealistic characters, and unintentional humor.

But don't worry, the movie then resumes its usual level of painful mediocrity as we cut fifteen years later. Dr. Loomis peaces out of Michael's care because he's honestly given up. Instead he takes to the touring circuit to plug his book on the Myers case. Luckily he has a bunch of "Michael making mean face" pictures to support his claims that Michael is actually a psychopath!

And if you're watching the "director's" cut of this film, you get twice the rape with none of the enjoyment. What's interesting about the director's cut of the film versus the theatrical is that they are nearly completely different films. Only a filmmaker with a definitive vision is capable of shooting an entire film, then shrugging and shooting a bunch of other shit to see what he can do with it.

I hear that's how John Huston did it.

So, after these two redneck hospital orderlies shove a female patient into Michael's room so they can rape her in front of him and maybe try to get him to rape her as well (?), they are VERY surprised when Michael, who is ten feet tall and has hundreds of different masks hanging all over his cell and who killed his entire family and who is clearly out of his mind, suddenly springs into action and commits violence upon them. 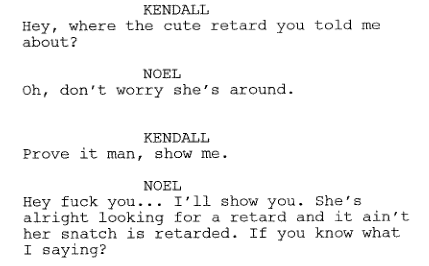 After a quick cameo from Clint Howard, we then see the scene that compelled Zombie to make this film — the absolute unquenchable desire to answer the so-far unanswered question in the pantheon of unanswered questions which propelled Zombie towards his ultimate goal of fleshing out the origins of Michael Myers: we finally FINALLY find out how he got his jumpsuit. It was from...some guy (Ken Foree) taking a shit...while wearing a jumpsuit.

From this point to the end, the film becomes a beat-for-beat remake of the original Carpenter film, which means it's the same, only far less good. We can no longer even find distraction in all the awful "new" stuff. All we can do is sit and watch and be reminded of when this was done previously, and much, much better. Even the original film's soundtrack is utilized — not re-orchestrated, mind you, but literally re-appropriated.

We meet Laurie Strode, perhaps the most famous heroine in all of horror cinema. Big shoes to fill — even more than Dr. Loomis — but Rob Zombie felt that Scout Taylor Compton was up to the task. And she's...not great.

Her friends don't fare much better. Zombie's depiction of Lynda makes her worse than Tucker Carlson, and poor Halloween-series alumni Danielle Harris is saddled with a very obnoxious version of Annie. These girls curse like Tarantino, call each other "bitches," and do nothing to be individuals. They all talk the same, act the same, and annoy the same. They are not in the least bit likable.

Then:
Dear god, we've seen this movie already. WE SAW IT THIRTY YEARS AGO.

Only this time with a sexy twist!

"It's so fucking warm!" Paul adds, apparently having sex with a living person for the first time.

Not long after this, we arrive at the third-act twist/non-twist, which is the big reveal that Laurie Strode is Michael Myers' sister. Once asked in an interview if he had lifted this from the finale of the original Halloween 2, he replied, "Honestly, no, I had completely forgotten about that," even though he also uses the song "Mr. Sandman," which famously appears in Halloween 2. Must be some kind of coincidence!

But hey, who am I to call Rob Zombie a liar? It's not like he ever goes back on his word, like that time he said he'd never make a Halloween 2.

Halloween takes way too long to end, as Laurie is chased through two houses, a pool, and a police car (during which Dr. Loomis very amusingly shouts, "Michael, what the hell!").

The film ends as it began: limply with little care or talent, feeling nothing more than like a passionless Google project. I liken it to the Republicans Googling random GOP governors to see who would make a good Vice-President during the 2008 election and finding Sarah Palin. Even the fucking font chosen for the open and closing credit reeks of "Jeeves, what's that font they used for Halloween?" "Copperplate Gothic!" "Thanks, Jeeves." (It's not.)

And as these closing credits begin rolling (and I see "Based on a Film by John Carpenter and Debra Hill," as opposed to "Based on the Film," as if the connection between the two films were tenuous at best), I must admit I am terrified. Truly. Not because of anything the film presented, and not even by the idea that this film exists and is now attached to the legacy of the original Halloween forever.

No, what’s terrifying is…people actually like this thing. People have said this is better than the original.

But hey, we’re all allowed to have our own opinions, right? That's what makes us human, after all — our own interests, passions, and ideas.

Having said that, if you want to slather yourself in cinematic excrement, be my...guess?