SINISTER: THE "OTHER" SOUNDTRACK 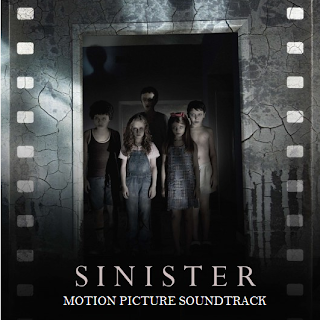 The most effective tool Sinister had going for it, beyond those creepy, fleeting glimpses of primary boogeyman Bughuul, was its soundtrack, which was a compilation of  composer Christopher Young's score as well as a collection of strange and experimental tracks from different avant garde groups. Like a lot of other Sinister fans, I was left a little underwhelmed by the official soundtrack release, which only showcased Young's score and left all the other, more memorable tracks on the cutting room floor. Because of this, I assembled my own "complete" soundtrack, plugging those avant garde tracks back into the existing soundtrack in the order in which they were used. Sinister director Scott Derrickson did such a good job of combining Young's score, the soundtrack, and the sound design that all of it is nearly indecipherable from one another. However, some tracks, like "Levantation," "Sinister," "Pollock Type Pain," "Don't Worry Daddy, I'll Make You Famous," and "The Eater of Children" don't appear at all (though the latter may be layered over the finale use of "Blood Swamp" - very hard to tell.)

Below is a large portion of those different avant garde tracks -- including their track titles, the artists who did them, and at which points they are used in the film.

Listen to the entire playlist on Spotify.

(Spoilers should be assumed from here to the end of the post.)

Family Hanging Out '11 / BBQ '79
Artist: Ulver
Song: Silence Teaches You How To Sing

A family is tied to lawn chairs and pulled into a pool one by one.

Things don't end so well for Ellison and his family with the final "footage" track that plays as his young daughter paints the house in her family's blood.

Ellison sees Bughuul in the backyard.

Ellison burns the home movies and his family begins packing to leave, as well as makes a reprisal during the end credits. This is the song with the very unusual dragging drum beat.