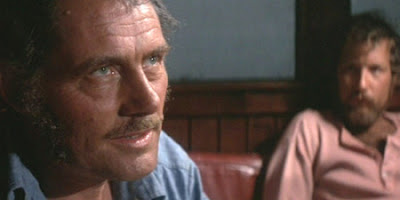 Japanese submarine slammed two torpedoes into our side, chief. It was comin' back, from the island of Tinian to Laytee, just delivered the bomb. The Hiroshima bomb. Eleven hundred men went into the water. Vessel went down in twelve minutes. Didn't see the first shark for about a half an hour. Tiger. Thirteen footer. You know how you know that when you're in the water, chief? You tell by lookin' from the dorsal to the tail.

What we didn't know... was our bomb mission had been so secret, no distress signal had been sent. Huh huh. They didn't even list us overdue for a week. Very first light, chief. The sharks come cruisin'. So we formed ourselves into tight groups. You know it's... kinda like ol' squares in battle like a, you see on a calendar, like the battle of Waterloo. And the idea was, the shark comes to the nearest man and that man, he'd start poundin' and hollerin' and screamin' and sometimes the shark would go away. Sometimes he wouldn't go away. Sometimes that shark, he looks right into you. Right into your eyes. You know the thing about a shark, he's got...lifeless eyes, black eyes, like a doll's eye. When he comes at ya, doesn't seem to be livin'. Until he bites ya and those black eyes roll over white. And then, ah then you hear that terrible high pitch screamin' and the ocean turns red and spite of all the poundin' and the hollerin' they all come in and rip you to pieces.

On Thursday mornin' chief, I bumped into a friend of mine, Herbie Robinson from Cleveland. Baseball player, boson's mate. I thought he was asleep, reached over to wake him up. Bobbed up and down in the water, just like a kinda top. Up ended. Well... he'd been bitten in half below the waist.

Noon the fifth day, Mr. Hooper, a Lockheed Ventura saw us, he swung in low and he saw us. He's a young pilot, a lot younger than Mr. Hooper, anyway he saw us and come in low. And three hours later a big fat PBY comes down and start to pick us up. You know that was the time I was most frightened? Waitin' for my turn. I'll never put on a lifejacket again.

So, eleven hundred men went in the water, three hundred and sixteen men come out. 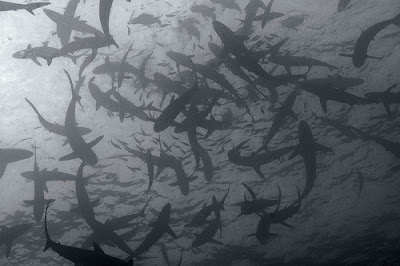 Because I could not stop for Death,
He kindly stopped for me;
The carriage held but just ourselves
And Immortality
- Emily Dickinson 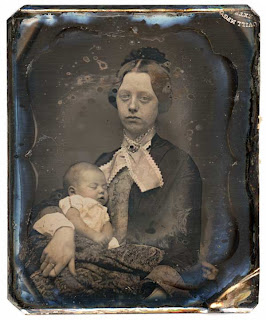 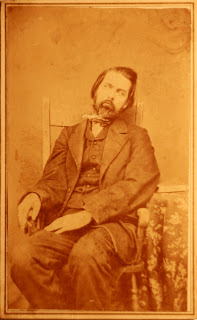 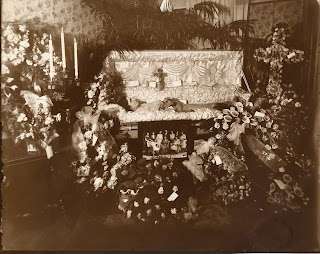 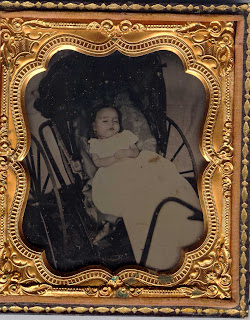 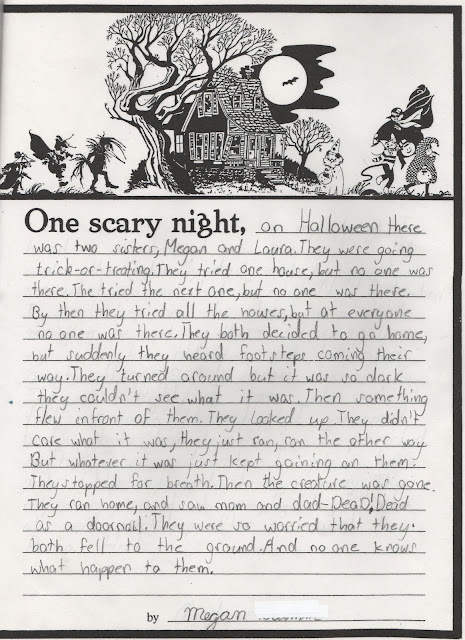 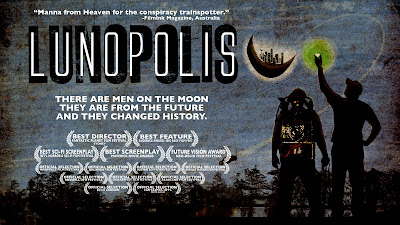 While I am a sucker for found footage/mock documentary horror films, too often fledgling filmmakers jump on this bandwagon to make a movie with next to no budget, all the while forgetting they’re supposed to put some thought into the actual story to make it compelling.
Admittedly, when Lunopolis began, I was intrigued, but at the same time, wondered if the movie was about to fall off the rails at any moment, as is so often the case with low budget genre pictures. The setup was, again, intriguing, but seemingly rather simple: a group of guys and a camera crew checking out a creepy boathouse. What would happen next? Would they become trapped within and threatened by alien monsters? Would they somehow be separated and have only their cameras to survive against their adversary? That’s what I was expecting, and I was very pleasantly wrong.
Instead, our characters find a strange object and are chased out of the place by an even stranger figure (in a very well executed sequence). What this strange object is our characters do not know, but when one of them slips it onto their shoulders (the object itself is some kind of harness), flips the switch, and vanishes into thin air for a microsecond before reappearing, they know they have something special in their possession. The true investigation begins. 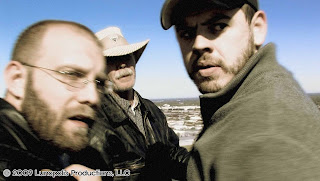 Lunopolis is clearly satire on the Church of Scientology, and its founder, L. Ron Hubbard (the religion within the film is called the Church of Lunology, and founded by J. Ari Hilliard), but if it were that and only that, it still could have worked as a film…just in a different way. But Lunopolis goes even further to inject actual thought into the proceedings, and I’ll go as far to say that it’s one of the most intelligently-written low-budget sci-fi films that I’ve ever seen. It’s a striking combination of The X-Files, Asimov, The Butterfly Effect, and Michael Moore investigatory journalism, and it works.
The film consistently maintains the “guys with a camera” aesthetic until meeting a man named David James (Dave Potter), who seems to know an awful lot about Lunology and its founder. And this is where the movie is at its most fascinating and dumbfounding. For the next ten to fifteen minutes, we step out of the first person POV and into a sequence that would not look at all out of place on The History Channel. To attempt to recreate the explanation would be near impossible, so I will instead say this: you’ll never look at Ben Franklin, Thomas Edison, and Elvis the same ever again. 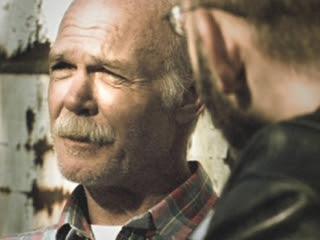 The movie ends with a twist that you may or may not see coming, which frankly doesn’t even matter—the story is so well-told and the twist so appropriate to the story that all it does is lend credence to the theories of Lunology and its potential dangers.
The acting is consistently believable, and in the case of Dave Potter, quite effective. He is a heavy presence whenever on screen, and his performance perfectly captures fear, conflict, and regret.
Alas, like any low budget genre film, there are problems. Some of the antagonists who run around in suits and sunglasses straddle that thin line between threatening and silly. There are some pacing issues, mainly in the beginning of the film. Of the few scenes containing visual effects, one of them involving a car just doesn't work. Lastly (and this is more of a marketing thing) that tagline, "There are people on the moon, they're from the future, and they changed history," is unforgivably cheesy.

Despite these very minor quibbles (and they are minor), Lunopolis is more than worth your time.
It’s a damn shame that a movie as intelligent as this one is reduced to festival screenings and DVD, whereas garbage like Apollo 18 receives a wide release (and little critic support). Like all things deserving, I’m sure the movie will gradually find its audience.
GRADE: A-

ON A PALE HORSE

Oh, Death, оh Death, oh Death;
Won't you spare me over til another year?

But what is this, that I can't see

with ice cold hands taking hold of me?

When God is gone and the Devil takes hold,
who will have mercy on your soul?

Oh, Death, оh Death, oh Death;
No wealth, no ruin, no silver, no gold;
Nothing satisfies me but your soul.

Oh, Death;
Well I am Death, none can excel,
I'll open the door to heaven or hell.

Oh, Death, оh Death;
my name is Death and the end is here...

If you are not watching Supernatural, I pity you.

PHANTOMS OF THE HUDSON VALLEY 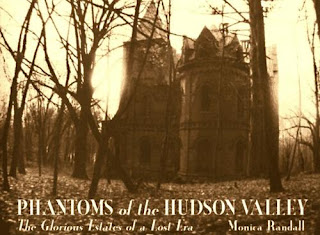 Monica Randall's evocative, sepia-tinted photographs capture the architectural splendor of twenty-six palatial estates that loom as mysterious ruins along the Hudson River. These stately mansions recall the aristocratic luxury of a bygone era, with their turrets and spires, rambling porticos, gleaming columns, and glaring gargoyles. Through her masterful photography and darkroom work, Randall has created some of the restless phantoms she learned about while interviewing the current owners. Pairing the visual spectacle of these ruined mansions with tales of the ghosts that haunt them, Monica Randall celebrates the glamour and mystery of these glorious old estates in this lavish book. 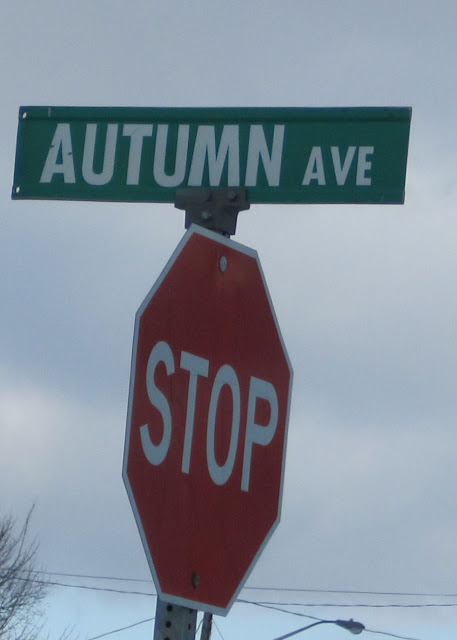 Thanks Gerridae.
Posted by TEOS at 4:42 PM No comments: