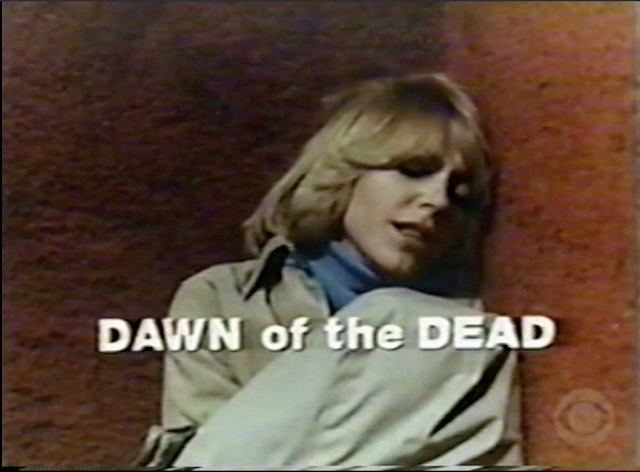 To lazily borrow some of this earlier Dawn of the Dead television promo post, pandemic lockdown and all the extra stuck-at-home time it afforded pushed me into embarking on an ambitious video project. File this one under fan edit: George A. Romero's Dawn of the Dead as it may have looked if it premiered on network television in the late '70s, specifically December of 1979, modeled on the 1981 broadcasts of Halloween on NBC and The Exorcist on CBS.

As the world continues to regress into a filthy toilet that refuses to flush, instead doing the same laps around the same bowl over and over, I've been immersing myself in way-back-when pop culture more and more as a means of comfort and escape, which led me to collecting recordings of network broadcasts of movies from the '70s and '80s with their original commercials intact. You can get lots of these on The Internet Archive, some more on Youtube, and if you really do your due diligence, from other collectors. In doing this, I've been able to collect some of my favorite movies in broadcast form, all with their original commercials, which is the most entertaining part. I can't tell you why older commercials are so hilarious and charming. Is it the corny approach to marketing, the awful skits, the dated fashions, or even the commercials that, by today's standards, are actually kind of politically incorrect? Whatever it is, there's something self-owning about a commercial trying to confidently sell you a product you've never heard of because it no longer exists, but at the same time, there's something oddly comforting about it, too — it's a return to simpler times, or at least a return to the times in which our bubbling cauldron of sins and hate lived under the surface of the world and wasn't so in-your-face throughout every 24-hour news cycle. 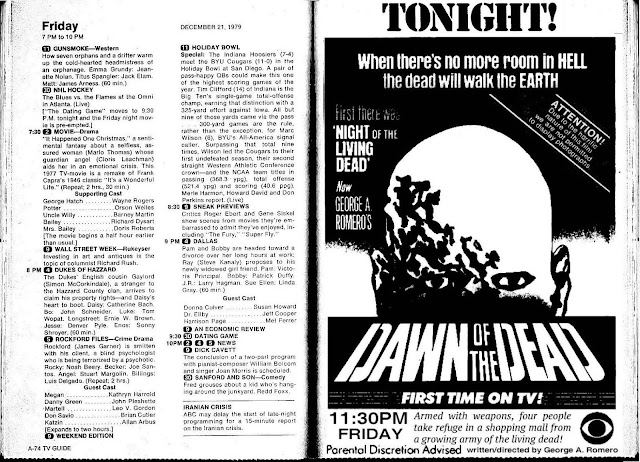 After accumulating all my must-have titles of these old broadcast recordings, including original airings of Dark Night of the Scarecrow and the Bob Wilkins Creature Features presentation of The Fog, one title eluded me, however: 1978's Dawn of the Dead, Romero's tale of four people taking refuge inside the abandoned Monroeville shopping mall from the zombie-ridden world that surrounds them — not because this broadcast was difficult to track down, but because it never existed; the movie's initially-issued X-rating almost ensured it would never be aired even on cable television, let alone a network station. With that, I decided to, as faithfully as I could, recreate what it may have looked like had CBS made the very reckless decision to present it for broadcast. Of course, I had to decide in which form to present the movie — meaning, would I include it as-is, squibs and all? Or should I really pursue making it look like a genuine broadcast for network television and cut out all the violence and bloodletting? After much back and forth, I decided it was necessary to go the censoring route. I know, I know — neuter Tom Savini's majestic gore gags? Who on earth would do that to such a genre masterpiece, and one especially known for its special effects? It all sprang from this amusing realization that Dawn of the Dead is the last movie a network would ever consider for broadcast — at least during that late-'70s era. Though it plays tame these days when compared to stuff like The Walking Dead, American Horror Story, and every show by Kurt Sutter for FX, the idea of cutting out all the gore from Dawn of the Dead for a hypothetical television broadcast became hilarious to me because it's such an antithetical title to show to a mass audience, especially when being presented by one of the anchor networks in all of television. (I was partially inspired to do this after watching ABC's 1979 Taxi Driver broadcast because so much of its content and dialogue had to be cut out that the remainder of the movie comes off as somewhat incoherent.)

Without further masturbation, my entire "CBS broadcast" of Dawn of the Dead is below, "recorded" by a Pittsburgh VCR in December of 1979, containing a VHS rip of the movie (edited for content), "original" 1979/1980 commercials (which naturally include TV spots for landmark horror films released that year), and CBS promos, all presented in purposely dubbed-over-many-times garbage quality. Nearly every commercial that's not a TV spot is a nod to something in Dawn of the Dead, so keep your eyes eagled. Whether you check it out just to catch a flick you've seen so many times before in a different form, or because you "get" the elaborate joke that it is (my edits are purposely clumsy, and don't miss my twist on the end credits), I hope you enjoy this standard-definition grindhouse experience. If you watch, drop a comment below and let me know what you think: you'll undoubtedly be nicer than people on Youtube.