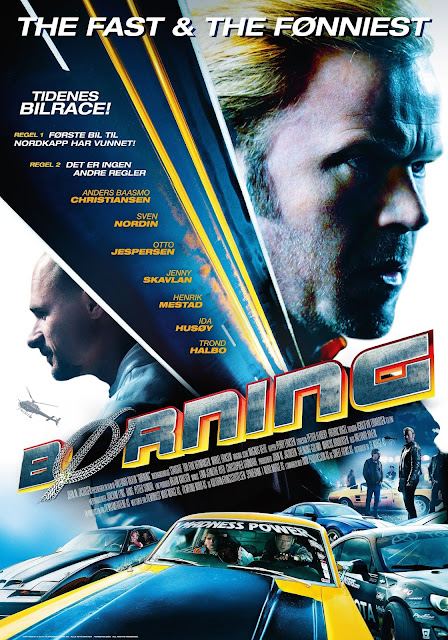 The car chase has been part of the action genre since nearly its inception. Names like Bill Hickman, who oversaw the car stunts in legendary films like The French Connection and Bullitt, and more appropriately Hal Needham, who remains probably the most famous in the Hollywood Hills for having directed and constructed the stunts of the Cannonball Run and Smoky and the Bandit films, were pioneers in what would soon become a new art.

Like car chases, films are a rush. When expertly constructed and smartly maneuvered, a film can sneak up behind you, take you by surprise, and before you know what hit you, it's already gone, fading into the distance, nothing but a blurry set of taillights disappearing around a curve. Marry them together in a fairly balanced way and you've got the makings of a film that never lets up, whether or not the cars are still in park. 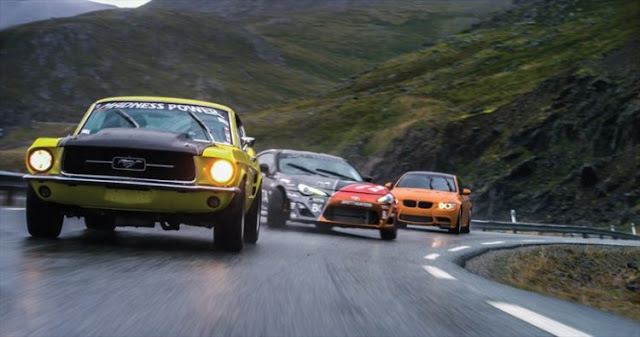 Roy Gundersen (Anders Baasmo Christiansen) likes to go fast, and in doing so, has built himself a family of both honest-to-gosh blood relatives and lifelong like-minded enthusiasts with whom to share his need for speed. While out on a leisurely drive with his very pregnant wife (and at her urging), Roy engages in a street race with local gear head TT (Trond Halbo), and not only loses the race, but loses control of the car, driving it off the road and flipping it on its roof. As a result of the crash, Roy's wife's water breaks so he rushes her to the hospital, where their daughter, Nina, is born sickly and with jaundice. Roy is promptly arrested soon after by Officer Philip Mork (Henrik Mestad), who will make it his mission to see that Roy either curb his street-racing tendencies, or go to prison for it.

Cut to fourteen years later, and Roy is working in an auto-body shop trying to stay out of trouble, when once again he crosses paths with his old rival TT. After a war of words, Roy challenges TT to a race - and not just to a street race, but a cross-country haul-assin' to the North Cape, a distance away of 2,208 kilometers (1,376 miles). Soon, two dozen cars are lining up to take part in an attempt to win the ceremonial $100 pot per racer, and Roy's all ready to go...until his now ex-wife drops fourteen-year-old Nina (Ida Husøy) at the shop, leaving her in his care for the week. With no other choice, Nina accompanies her estranged father on his run across Norway, where, in the midst of car-on-car mayhem, law enforcement outsmartment, and a decades-long rivalry, father and daughter will slowly begin to reconnect after years of silence, all while driving really, really fast. 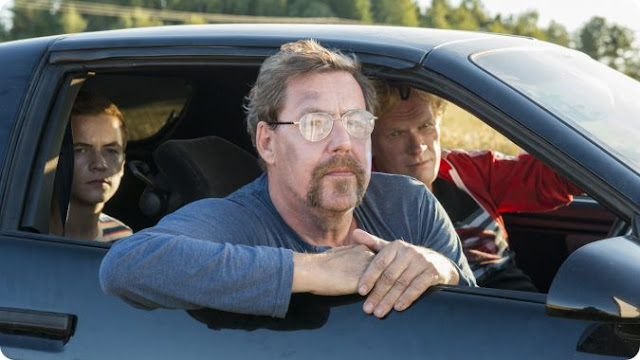 Present a film about caravans of muscle cars taking to the streets and modern audiences will inevitably think of The Fast and the Furious. Though that's to be expected, Børning owes everything to Hal Needham's legacy, beginning with story construct - a country-wide, every-man-for-himself car race - and continuing with its tone - which begins with car-chase thrills before introducing bouts of loony humor and, when you least expect it, some heart. Watch as Roy's Mustang haphazardly careens down hillsides set to banjo-jangling rockabilly and try not to picture Burt Reynolds or The Dukes of Hazard in their ten gallon hats and their "aw shucks" smiles. With shades of It's a Mad, Mad, Mad, Mad World thrown in for good measure, Børning presents a collection of characters all taking part in a mad-dash across the Norwegian countryside for their very own reasons. Some are doing it out of pride, some for the rush, and some because they're dying, and it's the last chance for them to experience the beauty of their country.

Børning is, not surprisingly, fast-paced, and is beautifully shot to fully convey the impressiveness of the car stunts on hand, and very little of it relies on CGI to maintain that '70s era feel. But it's also refreshingly character-based, allowing for moments of effective humor and genuine heart. Christiansen's Roy comes dangerously close to veering off the road of redemption but thankfully circles around just in time, and young Ida Husøy as Nina not only charms the pants off her audience, but partakes in a scene involving a gas station sandwich that will break your heart. One cinematic device perhaps more overused than the car chase is the the estranged parent and child overcoming their years of absence and finding a way to reconnect. Though Børning offers a new environment for its own parent/child reconnect to take place, the audience isn't necessarily seeing something it hasn't already seen countless times before. Despite that, Christiansen and Husøy work very well as the father/daughter dynamic, and even though it may be a well-worn clutch, the audience can't help but get caught up in their new-found bond. There's also a suggested romance between Roy and fellow body-shop worker Sylvia (Jenny Sklavan) that remains a bit too ambiguous, and for most of the film it's barely acknowledged, leaving the audience wondering if their relationship carries any weight beyond the sexual, or if they're supposed to care about their union. Though the ending would suggest a future between them, its potential for further emotional retribution is too little, too late.

Supporting characters offer the same amount of solid work, but the ailing Nybakken (Otto Jesperen) steals every scene in which he appears, milking his illness (the fictional Schreiner's syndrome) for all it's worth, not to mention proffering the biggest laugh of the film. You'll know it when you see it, and it's impossible not to love.

The car chase thing has been done to death, and it's built multi-billion dollar franchises, but in the middle of all the spectacle, something is being left behind. Børning director Hallvard Bræin seems to have figured out just what that is. (He's also turned it into a so-far three-film franchise.) While the engine's roar and the glistening chrome may present an intense and thrilling time at the cinema, it's always going to be more interesting for the audience to learn about - and come to care for - the people behind the wheel.