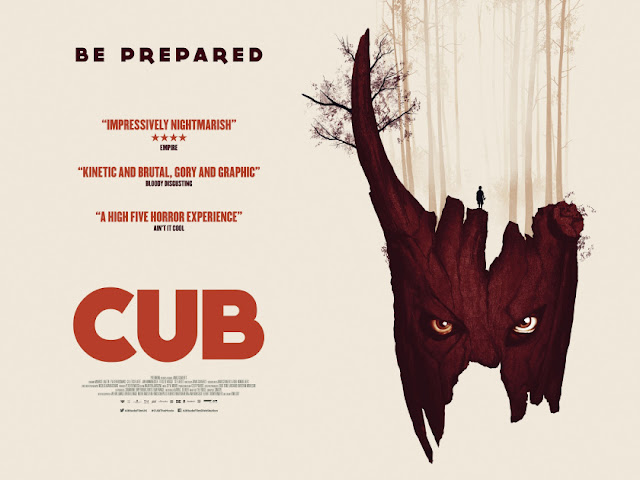 If you've ever wondered how Friday the 13th: Part 2 would have looked had they maintained Jason as the new killer of the series, but preserved the age (and even look) as he'd appeared in the maybe/maybe not dream sequence of the original's ending, Cub might just be what you envision right down to the makeshift mas). It is, after all, about a group of young people who venture into the whispered-about woods, trade tall tales of "the werewolf" (called Kai) who is said to stalk the grounds where they have chosen to camp, and kill whomever dares trespass into his home. Basic skeleton aside, and much respect to the beloved Friday the 13th franchise, Cub takes a concept used dozens of times before and somehow manages to sidestep all preconceived notions and present a story that's well realized, well executed, and even well acted.

Experienced first-hand through the eyes of Sam (Maurice Luijten), a boy with an ambiguous backstory that remains mostly unexplained, but on which enough light is shed that the audience knows something went pretty bad in his life, Cub is boy-who-cried wolf in design, in that his questionable history makes him an unreliable narrator. Simply put, after the scout leaders tell tales of Kai the Werewolf, and Sam subsequently claims to have seen that same monster, no one believes him, including scout leaders Kris (Titus De Voogdt) and Peter (Stef Aearts). Because of this, Sam takes it upon himself to investigate the mysterious Kai and determine just who - or what - this figure is he sees darting in between trees and pillaging items of use from the sleeping scouts during the night. What soon occurs is an untrustworthy bond and a surprising revelation of sorts that puts Sam instantly in danger - along with everyone else in camp. 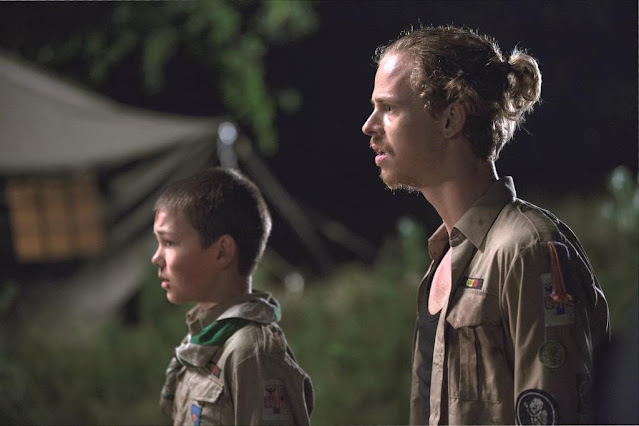 One of Cub's best aspects is, no bullshit, its emphasis on real characters, which isn't to say that everyone is provided with overwhelming backstories; instead, it's more that each character is provided with and exudes enough depth that it's easy to determine the kinds of relationships they share on screen and, at times, makes it difficult for the audience to know how they should care about each character. The best example of this is the character of Kris (aka Baloo): a more typical film would have chosen to make his character flat-out unlikeable from beginning to end, but Cub plays it differently; sometimes the film eagerly paints him as a prick, but other times, in quieter moments, the audience gets a glimpse of what he's actually like and they begin to warm up to him. Sam puts him off - it has to do with that ambiguous backstory that's never explained - and it's this slight fear and hesitation of him that makes Kris so conflicted. Though Cub plays as a Friday the 13th homage, with a bit of Haute Tension thrown in, but not in the way you immediately suspect, it avoids the typical broad strokes character archetypes on which that series and others of its kind have relied for years (the guiltiest being the abhorrent remake).

As might be expected, Cub makes excellent use of its wilderness environment. Ambience of the great outdoors is in full use - buzzing insects, creaking trees, the snapping campfire. Likewise, quiet is used to great effect, especially when it comes to Kai's rattling, mantis-like breathing, which soon becomes an ominous and reoccurring presence. The best component of all is the retro synth-based musical score by Steve Moore, who once again channels John Carpenter as he did for another superb horror offering, The Guest. 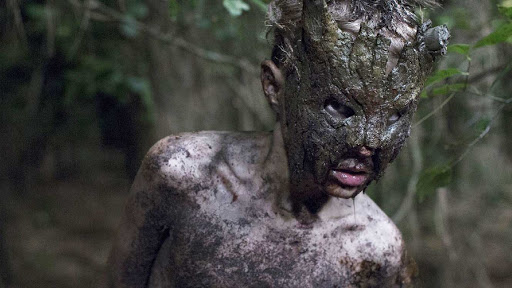 Where Cub may lack in its originality, it makes up for with its assured direction, its across-the-board solid ensemble of actors, its unrelenting violence, and most important, its glee at wallowing in gray eras - both in its storied ambiguities and its look at its characters. Additionally, it almost feels unfair to hit Cub with the dreaded "unoriginal" smackdown, considering it was designed to homage this kind of film from the beginning. Though the official summary erroneously name-drops Lord of the Rings as an influence (it's possible/likely its writer had instead meant Lord of the Flies), and even with its clear Friday the 13th inspirations, it's obvious that Cub's director, Jonas Govaerts, is a horror fan through and through. (One character's ringtone being the main title from Suspiria by Goblin certainly cements this.) When a horror fan makes a film for horror fans, that love and passion for the genre always shines through even the most unoriginal story. Cub's ballsy ending, its willingness to provide you with unpredictable characters, and its unrestrained use of blood and grue makes it a thrilling addition to the horrors of the great outdoors.

Cub is a brutal, vicious, at times funny, ballsy, and unpredictable little slice of horror that proves, if nothing else, it's still possible to set a film at a camp in the woods with a masked killer and wring genuine scares, all while wearing its influences on its sleeve and forging its own identity. 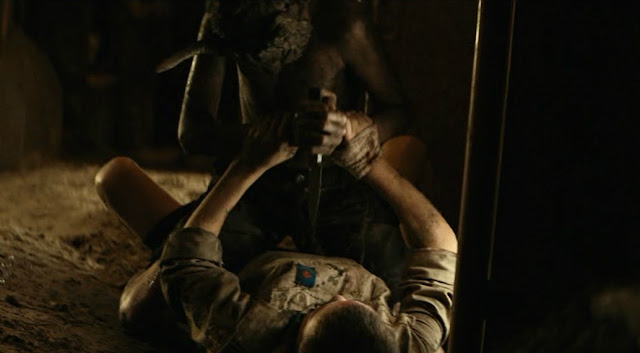