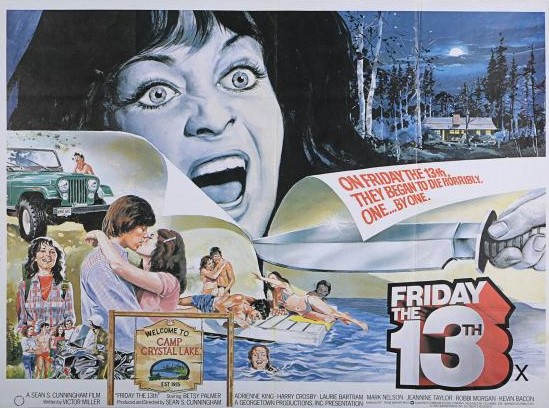 The Friday the 13th series will always hold a special place in my heart, regardless of how dumb it became once Paramount Pictures’ eight-film reign ended and the franchise ended up with New Line Cinema. (Jason Goes to Hell is enough to cement my point, but the remake easily earned my hatred.) As a kid, and once the calendar fell on Friday the 13th, catching a mini marathon of the series on TNT, USA Network, or what was then known as the Sci-Fi Channel was always an event. I’d fire up the VCR, grab a VHS tape from the cabinet to sacrifice, and record as many entries as I could, stretching EP mode to its breaking point. Growing up with an old-school mother, the hammer often came down on the movies I rented, so I worked with what I was given, which were edited-for-content, commercial-ridden airings of the least mother-friendly horror series on the planet.

Slasher fans seldom point to the first Friday the 13th as their favorite series entry, or even the best, which flies in the face of how these things usually go with long-running franchises: the original is almost always the favorite, and almost always the best, but with the franchise not even introducing infamous masked killer Jason Voorhees until the second entry, nor putting him in his famous hockey mask until the third, and with the overall series also going through an odd metamorphosis that saw entries vying to be murder mysteries (Friday the 13th), grindhouse sleaze (Friday the 13th: A New Beginning), gothic monster movies of the golden age (Friday the 13th: Part VI – Jason Lives), paranormal tales (Friday the 13th: Part VII – A New Blood), or self-aware dark comedies (Jason X), it’s easy to see why certain entries appeal to certain people. Overall, and even extending into the lesser heralded New Line era, the Friday the 13th series is like a Rorschach Test: if you look deep enough, you’ll find something that calls to you. 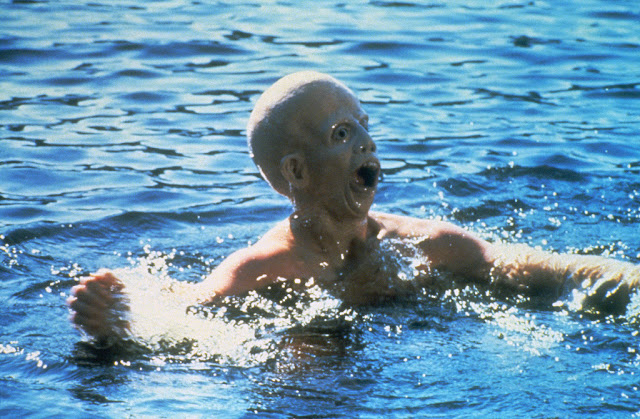 Though Friday the 13th: The Final Chapter is the most popular entry in the series (I won’t argue with that), I often feel that the 1980 original gets overshadowed and dismissed as being that weird entry where the killer is Jason’s mom instead of the marquee maniac we’d all come to love. Even with the maestro of mayhem Tom Savini in charge of the blood and guts, it doesn’t contain the same kinds of outrageous kills that the series would later feature, much like in Savini’s return to the series with The Final Chapter, or 1993’s Jason Goes To Hell, which has nothing going for it except the violence. But there are all kinds of reasons to celebrate the original, even if its own creators still admit to this day that it was a blatant rip-off of John Carpenter’s Halloween.

Friday the 13th offers an honest-to-gosh attempt at creating backstories for its characters, regardless of their superficiality. Alice (Adrienne King) has unknown and unresolved issues in California, Marcie (Jeannine Taylor) had nightmares about raining blood as a kid, Ned (Mark Nelson) is the “funny one,” etc. There’s nothing earth-shattering going on here, and except for some outward capering, their backstories come solely from dialogue and not their performances, as Halloween was so keenly able to do. But that’s okay! Post-Halloween slashers didn’t strive for much beyond a passing resemblance to real life and some nifty kill scenes, and Friday the 13th handles that with ease. Though it’s primarily known as a slasher flick today, putting yourselves into the shoes of an unknowing audience those forty years ago instead reveals a murder mystery at its core, even if clumsily handled. Halloween never played around with “who” the killer was—it’s how the flick opens—and while Friday the 13th is happy to ape Halloween’s slasher aesthetic, it’s also eager to apply a bit of Ten Little Indians, sticking a bunch of characters in an isolated spot and painting several of them as potential killers. Steve Christy (Peter Brouwer), who has a vague romantic history with Alice and seems against her leaving to return home, disappears into town just before bodies being to drop at Camp Crystal Lake, and all while driving a jeep…just like the unseen killer. Crazy Ralph (an incredible Walt Gorney) prophesizes all across town about how the camp is doomed, and how all those who stay there will “never come back again.” These red herrings aside, a cheap final act reveals the killer to be…someone who hadn’t appeared as an on-screen character until that very moment, stepping out of her jeep wearing her best church sweater: Jason’s mother (Betsy Palmer), known only then as Mrs. Voorhees. (She’d be given the name Pamela in The Final Chapter.) Though this reveal is a total cheat, in that audiences couldn’t possibly have guessed that the killer was a character they didn’t know existed (the on-screen hands of the killer throughout the flick are definitely a man’s—see  below), the machinations of the film up to that point were mired in mystery, successfully keeping the audience guessing up until that “oh…” reveal. 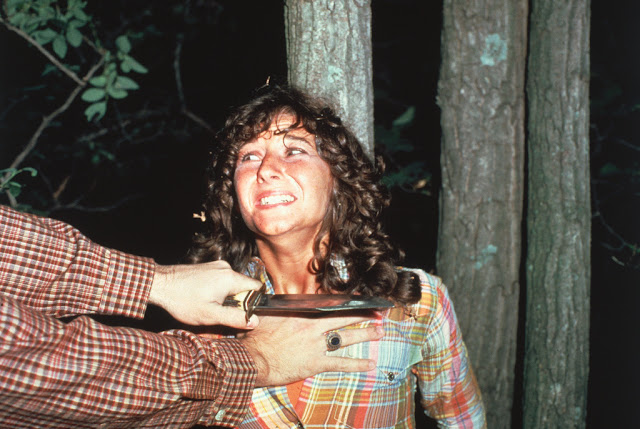 Cast, director, and special effects aside, the real star of Friday the 13th—and almost every entry produced by Paramount—is the musical score by longtime series composer Harry Manfredini. If there were any justice in this world, the exploitative reputation of the Friday the 13th series would be forgiven and his work would be just as celebrated as the compositions in JAWS, Halloween, Phantasm, and The Omen. During this era, low-budget filmmakers were seeking cost-cutting synthesizers, but Manfredini stuck with real-live strings, giving Friday the 13th a lush and propulsive orchestral score that, if we’re being honest, the sub-genre probably didn’t deserve. (He also scored the 1986 slasher Slaughter High, where he treads much of the same very recognizable ground.)

For the last few months, fans have whispered about the rumored Friday the 13th Complete Collection that seems to be in the works, and seems to be coming from Scream Factory, which stems from a couple series veterans getting a little too loose-lipped on social media. With the series celebrating its fortieth anniversary this year, it would've been great to see the announcement of a brand new Friday the 13th film, but with the series having been in litigation for the last couple years, for now, it seems as if Camp Crystal Lake and Jason Voorhees really are doomed. The only other nod to 40 years of Friday was Paramount’s steelbook reissue of the first film, and while its release smacks of the kind of “blood from a stone” pattern of re-releasing the same titles over and over without new content, at least the studio, once ashamed of its affiliation with the series, is acknowledging its place in cinema history and celebrating its impact on the movie-going public. 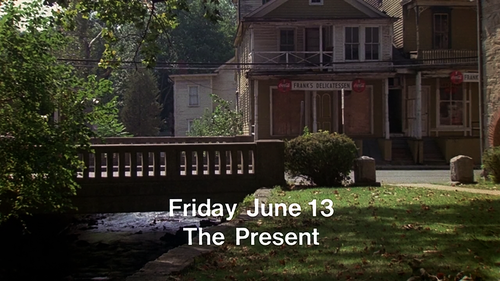