NO ESCAPE aka ESCAPE FROM ABSOLUM (1994) 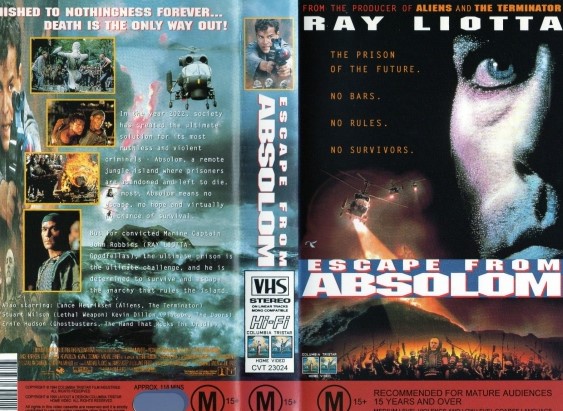 If you’ve heard of 1994’s Escape from Absolom at all, it’s likely by its American title, No Escape (not the Owen Wilson film of the same name). Though it opened #1 at the box office during its weekend debut, it would ultimately fail to make back its production budget, relegating it to live in home video obscurity. Director Martin Campbell (Goldeneye, Casino Royale), relatively unknown at that time, helms an adaption of Richard Herley’s obscure 1987 novel The Penal Colony and staffs it mainly with character actors — and Ray Liotta, in a rare heroic leading man role. The likes of Stuart Wilson (Death and the Maiden), Ernie Hudson (Ghostbusters), the immeasurably cool Lance Henriksen (Aliens), a very pre-Entourage Kevin Dillon, and many more “hey, it’s that guy!” folks fill out the diverse cast — none of whom would be considered box office draws.

No Escape was one of the many unexpected titles I thrived on as a kid; a version recorded off television (likely the now-defunct Prism) enjoyed dozens of revolutions in our trusty VCR. Though it’s fairly violent, the idea of two warring prisoner factions attacking each other’s very rustic fortresses clad in armor and wielding weapons both futuristic as well as primitive and obviously made from forest implements was hugely alluring to a child’s overactive imagination. No Escape, in a sense, actually plays like an adult person of Hook, with the Insiders (good guys) taking on the adult counterpart roles of the Lost Boys who live by their own code and with their own sense of order. Houses are constructed from logs and tree trunk wood, clothes are burlap, weapons and armor are fashioned from bamboo, and the less said about their food, the better. And then, like a grown up and cynical Peter Pan, Ray Liotta’s John Robbins drops unexpectedly into their lives — although, instead of re-learning how to fly, he learns how to kill a bunch of bad dudes alongside other people instead of killing a bunch of bad dudes by his lonesome. 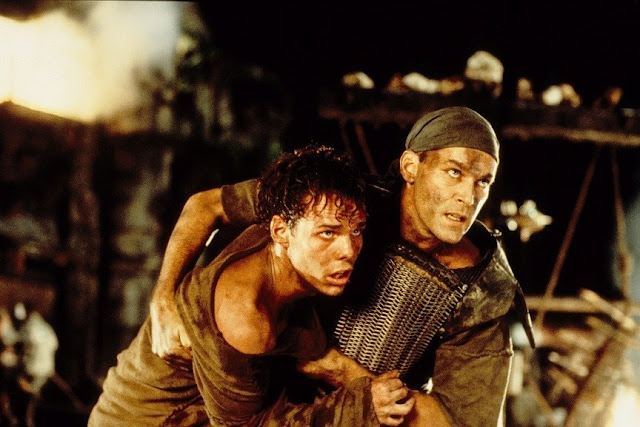 Additionally interesting is the dichotomy of the prison island’s inhabitants, because everyone on the island deserves to be there — everyone has taken lives — but yet the prisoners naturally deflect to either side. If you’re semi-bad but bare some regret for your shiftless life, you become an Insider and you live as an undersupplied and undernourished member of what’s essentially a poor community, but if you’re really bad, you become a member of the Outsiders — the baddest of the bad who are offered a very unfair advantage by the Warden, who drops off supplies from a helicopter (which include the aforementioned futuristic weapons) to ensure the two factions remain constantly at war. Even among prisoners, the Insiders strive to be good, under the paternal guidance of The Father (Henriksen). The film acknowledges that, yes, people can make poor choices, but even when living in the physical manifestation of oblivion where there is no chance of salvation — where there’s nothing to be gained from living in peace; there’s no such thing as time off for good behavior — some still choose to live as good men anyway.

Liotta’s John Robbins is an interesting lead; even when the hardened bad-ass Marine eventually softens, Liotta still plays him as intimidating and slightly cold, unwilling to grow close to any of the men. In particular, Robbins takes Kevin Dillon’s Casey, a young and hapless would-be kidnapper, under his wing (sort of)…yet he still maintains a detectably off-putting presence toward him. He’s that film father who offers tough love from the very start, and only at the end when his ice melts does he reveal himself as someone empathetic and warm; here, however, this film father fails on that second part. Liotta can play warm — 2001’s mediocre drug flick Blow proves this — but in No Escape, where he’s playing the hero for the first time in his career, he seems to have trouble playing someone strong and heroic but also someone who surrenders to the warmth and shared community of the Insiders’ camp. As such, the audience never fully warms up to him, even as he slowly sheds his lone-wolf sensibilities in favor of living in a community — or the closest thing to it he can find.

Much of No Escape can be explored and further analyzed; its futuristic setting (sort of — this movie takes place in or around 2022, which is depressingly right around the corner) is once again a warning on where a failing society can lead: rich vs. poor exaggerated to the nth degree, and the idea of a for-profit prison system are two aspects of the plot that are still in constant conversation today.