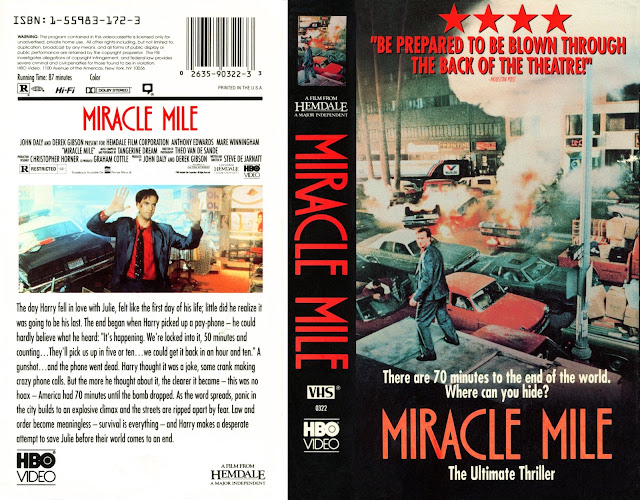 Hollywood is in love with portraying a world either on the brink of extinction or already long dead. And these types of films have only gotten bigger in scale since the advent of CGI. Now it isn't just meticulously constructed models being burned with a flamethrower or drowned in frothy ocean water. It's entire cities, or countries, or planets. Streets melt or collapse into sink holes; skyscrapers disintegrate into piles of twisted metal; bridges belly-flop into the oceans below. Spoiler alert: as the technology has improved to realistically destroy civilization itself, the magic of how a world of make-believe was brought to life has decreased, skewing these weakening apocalyptic stories to such a degree that darkened-theater demands of, "How did they do that?" have since been answered by, "Computers, idiot." The rapidly improving visual effects industry may be bringing the impossible to life, but it's doing so at the expense of why film exists in the first place: human connection.

During the 1980s, this apocalyptic fascination somewhat took a backseat to John Hughes and the many action and horror franchises that were running rampant and attracting most theatergoers' attention. Except for Max Rockatansky, no film characters were keen on watching social order fall around them before wandering around a desolate desert landscape. Everyone just wanted to do cocaine and wear pink sunglasses and listen to Wang Chung. This is one of the things that makes Miracle Mile so notable, although it's not the only thing. What makes Miracle Mile a film worth remembering over thirty years after its theater debut is how much of it still feels so relevant, and how at-ground-zero it puts the audience at the conception of nuclear destruction. One of Miracle Mile's greatest strengths is that once Harry (Anthony Edwards, Pet Sematary Two) answers that damned ringing payphone and learns nuclear warheads will strike Los Angeles in fifty minutes, the remainder of the film plays out in painstaking real time. It's at the very diner where Harry was supposed to meet Julie (Mare Winningham) for their date where he relays the news of his revelation to the other diner patrons. Most of them are quick to wave off his claims until one of them, well-connected and fully well knowing this was a possibility, gets on her mobile phone to confirm Harry's claims. Once she does, the film's collection of tremendous supporting characters all begin working together to exact the quickest evacuation of Los Angeles they can muster: who will gather the food, who will navigate, and for the love of everything, does anyone know a helicopter pilot?

It's watching Los Angeles' very slow, but also very rapid, descent into chaos that enables Miracle Mile to pack such a punch. And during its 1988 release date, the Cold War was still very much in the forefront of American minds. It seemed like nuclear warfare was a dangerous possibility nearly consistently, and many people were fearful that the bombs could drop at any time. But it's also watching Harry hopping over cars, fleeing gunmen, ducking from explosions, and depending on people he's never met to not only find a way out of the city, but somehow also locate Julie, a perfect stranger with whom he's in love, in the middle of all that madness. 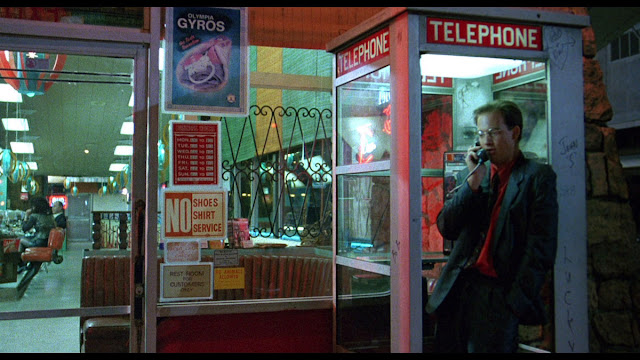 Getting back to an earlier point, and being that this was 1989, Miracle Mile’s bird's-eye view of destruction is brought to life all through the use of practical and in-camera effects, depending very scarcely on opticals. CGI at its height has brought entire characters to life, be it Gollum or Caesar or King Kong, and after a while, though its creations and its potential to create can be deeply affecting, it's also doused some of the fear that filmmakers were once intent on establishing. Nowadays, to set a character on fire, the actor puts on a green body suit and pretends to run from a flock of bees, but back then, filmmakers really just set stunt people on fire, and in spite of how impressive that CGI fire may look, our brains are always going to filter what's real and what's not. Because of that, their respective potential impacts are never going to be on an even scale. But this is just one example of numerous that Miracle Mile presents so well. As the bombs approach toward film's end and the city begins billowing in non-CGI radiation heat, you feel that heat against your skin. When the helicopter crash lands in the ocean and the cab begins filling with real and black water, your own breath feels stifled. This is Miracle Mile’s power.

What Miracle Mile lives and dies by is its cast, which just might be one of the best ensembles ever assembled for a film, even if they may not command A-list status - today or back then. Anthony Edwards, at first glance, seems like an odd choice for a leading man, and his somewhat unconvincing voice-over that opens the film isn't doing him any favors, but once Miracle Mile settles back and finds its groove, you begin to realize that the beauty of casting folks like Edwards or Mare Winningham in the lead roles is because they never achieved the bigger-than-life baggage that some of their colleagues did. Edwards's plain and everyday looks helped to sell his character as simply that: a fledgling musician but nothing more - no one big, no one prominent. He felt real. 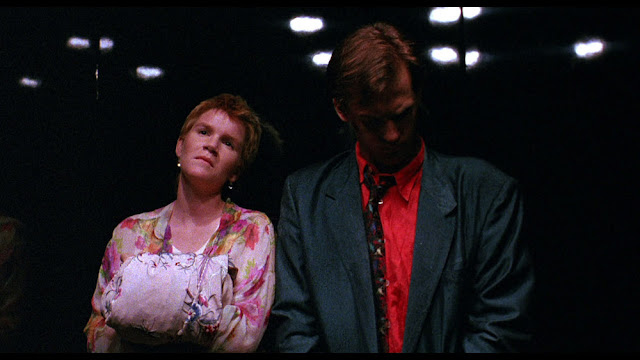 The beauty of watching Miracle Mile for the first time, especially if you're a film buff who for one reason or another has never had the pleasure, is that every single supporting character is played by a recognizable face. In a flip-side of Anthony Edwards's everyday looks and stature, it's in watching an immense collection of actors and actresses playing these small roles in which they find themselves dealing with the end of the world, and all the emotional and irrational thoughts that come with it, that really help to sell the outlandish (but not really!) premise Miracle Mile is selling. To list them all here would be exhausting, but rest assured each face that pops up will trigger instant recognition. (This thing even has Denise Crosby! Pet Sematary reunion!)

Miracle Mile manages to combine several different genres - thriller, romance, sci-fi, even irreverent comedy - to paint a look at the last fifty minutes of life in a way that's both completely outlandish and entirely believable. From the wall-faced, blonde-mulleted, bodybuilding rescue pilot (Brian Thompson) who won't leave his girlfriend behind, to the police-car-stealing bystander who needs to rescue his sister, to Julie's in-love-but-out-of-touch grandparents, Miracle Mile pulls off a magnificent feat: in the midst of city-wide carnage, burning cars, exploding buildings, and oncoming nuclear war, it puts love at the forefront. Even as the helicopter whirs to life in front of him, Harry opts to instead turn right around and head back into the madness for the woman he barely knows, but whom he already somehow knows he loves. That's something not even CGI can bring to life. 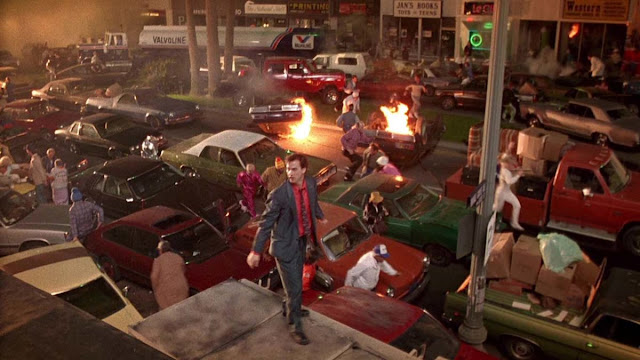 And I haven’t even mentioned the tremendous score by Tangerine Dream. The film's intimate opening has the couple-to-be wandering Los Angeles streets and slowly getting to know each other, complemented by that ethereal score, but soon, madness descends upon the city, bringing to life chaos and disorder with it. Cars honk and crunch metal, flames crackle and whip, errant bullets ricochet off sewer pipes and walls. And the score by Tangerine Dream, which is not only one of their best (next to Sorcerer), begins hammering like Miracle Mile’s heartbeat, becoming a steady tick of the clock quickly running out of minutes.

On those lists that circulate tantamount to "One Hundred Films to See Before You Die," Miracle Mile should be on there. It’s proven to be one of the biggest cinematic surprises of my life; if you give it a chance, it just may be the same for you, too.