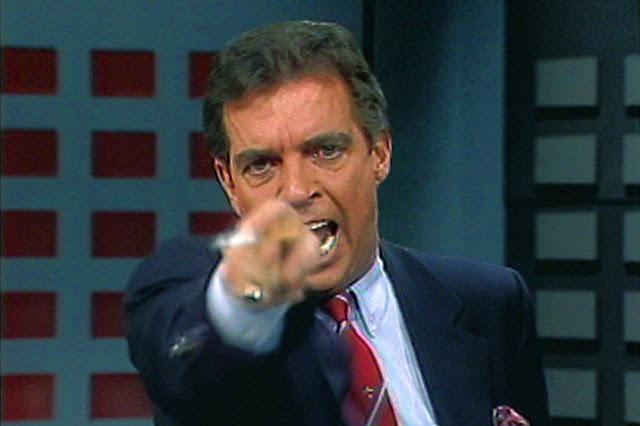 So-called violent movies, TV shows, and video games (and comic books and rock 'n roll songs and rap videos and...) have been vilified by puritans and alarmists for as long as those mediums have existed. Though the offending examples often cited change with the times, the same talking points and skewed "studies" are trotted out time and time again to prove a point that's tantamount to witchcraft: movie violence causes real-life violence, horror and slasher movies warp kids' minds, and blah and blah and blah.

Likely a relic to audiences today, Morton Downey Jr.* (no relation to Iron Man) is considered the pioneer of trash-talk television. The literally and figuratively big-mouthed TV personality, whose titular show was produced in my home state of New Jersey, ran from 1987 to 1989 and was a slimy portent of things to come, both in terms of sensationalizing people's worst behavior as well highlighting outrageous hard-right leaning "conservative" viewpoints. (He was a staunch anti-abortion activist who never missed a chance to impugn liberal philosophies while dabbling in occasional racism and misogyny. Sound familiar?) A precursor to The Jerry Springer Show, which somehow ran for 28 years, Morton's format presented hot-button guests with opposing views on social issues and let them claw at each other's throats, often manipulating the conversation and taking both sides at once just to spur the conflict.

The below episode, presented in its entirety, focuses on slasher films of the '70s and '80s, namely (but not exclusively) 1974's The Last House on the Left and 1977's The Hills Have Eyes. (Between those two titles being thrown on the pyre, and Morton opening the show wearing a Freddy Krueger mask, I'm sure Wes Craven was pretty proud at the time.) Notable guests include Hills actor Michael Berryman, who played mutant cannibal Pluto, and former Fangoria editor Anthony Timpone to take the "everyone needs to relax" side of the argument, but whom you won't be surprised to hear are barely given time to finish their points before they're cut off by Morton or his puritanical counterpoint guests. The episode is definitely worth watching for all kinds of reasons, especially if you're a pro-slasher type of person, but mainly because television from the '80s is kind of hilarious.

The greatest irony of the claim presented on this episode, which is the ease at which kids were able to rent R-rated horror films from local video stories (RIP) was causing them psychological harm, is that the claim is coming to you from one of the trashiest daytime shows in the history of television – one so frequently condemned that it had a hard time maintaining a steady business relationship with advertisers – which was only a single remote control click away from our apparently very impressionable children. Though slasher films, throughout their history, often showcased bloody kills and pornographic images, they were fiction – gags created by special effects artists and blocked by directors and cinematographers. When it comes to things like The Morton Downey Jr. Show, from the host to the guests to the venomous audience members, these people were real and the behavior they exhibited was often hostile, dismissive, self-righteous, profane, hateful, and demeaning. There are two scenarios here: a child watches a movie maniac kill people, so they go out and do the same, or a child watches a "real" TV show where adults scream at each other and hurl insults and thinks, "Oh, I guess this is how I should act when I'm older."

You tell me which is more likely.