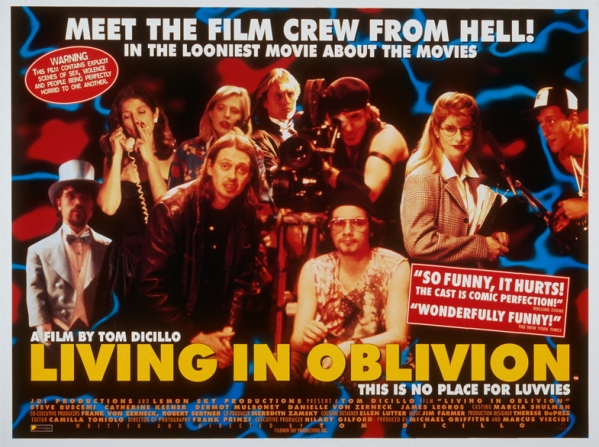 Have you ever noticed that nearly every film about making a film is rife with drama, turbulent emotions, and absurdity? That there is no shortage of bad news, insurmountable odds, pain, and suffering? Ever wonder why that is? Filmmakers love to make films, and that's obvious, or else they wouldn't do it, but that doesn't mean that they enjoy every stage of the process - like butting heads with producers, raising money, catering to every ego on set, dealing with drug/alcohol/other vice addictions. The director only wants to make a film, and sometimes it seems the things standing in the way of that are the very resources he has chosen in order to make that film happen.

Living in Oblivion, if you have any respect for the actual filmmaking process, is something you simply have to see - if only once. An exorcism of sorts for writer/director Tom DiCillo, whose debut effort, the Brad Pitt-starring Johnny Suede, it would seem provided him with all the fodder and inspiration needed to examine the art of the film and the collaboration it requires before tearing it all apart with hilarious results. As presented, and according to DiCillo, filmmaking is a balancing act. It's massaging actors' egos, it's contending with faulty equipment, it's butting heads with DPs, it's dealing with ball-busting assistant directors, and it's keeping the fucking boom mic out of the shot. This and so many other things. 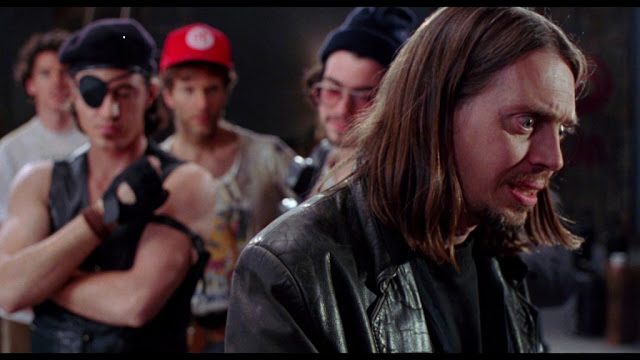 For this deconstruction, DiCillo has brought with him a remarkable cast of knowns, lesser knowns, and unknowns, each absolutely thrilled to be satirizing the very industry in which they work. Although Steve Buscemi takes on the role of the beleaguered director, there is no one special performance worth calling out over any others, because everyone does tremendous and hilarious work. But if there had to be one, Phantasm II's James Le Gros walks away with most laughs per capita of screen time, as his passive aggressive pretty boy Chas Paolomino is an absolute delight to watch; his love him/hate him presence sees him suggesting alternate camera shots, blocking, and dialogue, which garner some of the biggest belly laughs of the film. (His insistence on laying down on the bed in a too-casual, slightly effeminate way, but never managing to appear fully in the shot, is a personal favorite.) It's also nice to see Dermot Mulroney in a beefier role than audiences are used to, as he's an undervalued performer who deserves to be doing more of The Grey and less Insidious: Chapter 3. And yes, even Peter Dinklage! Can you believe he was an actor before Game of Thrones? Weird, right?

What makes Living in Oblivion so entertaining to watch is its uncanny ability to send up the medium while doing it with equal parts hate and love, and resulting in a film that's just damn good, whether you get all the film-related jokes or not. Tom DiCillo is an extremely underrated filmmaker, and he has a firm grasp of the material and his script. Living in Oblivion serves two purposes: it both makes you wonder how someone of DiCillo's talent could've ever had such trouble on set, and then offers an answer to that question with a charming, acerbic, hilarious, and at times heartbreaking response. 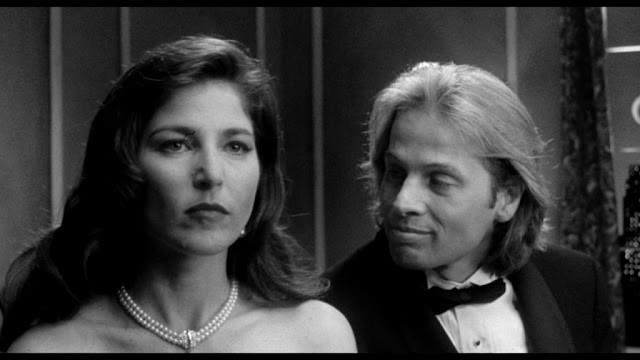 DiCillo has recalled reacting to notices about Living in Oblivion that stated the film could only be truly appreciate by other filmmakers, which he is quick to deny. While perhaps it's possible that other filmmakers could appreciate Living in Oblivion the most, it does have one thing at its core that every facet of the audience can relate to, and that's the utter hell it can be in trying to accomplish a goal while you have nearly every possible hurdle popping up to squash that accomplishment - to the degree you start to wonder if you're cursed. Living in Oblivion just happens to be about making a film, but there's nothing about it that will leave you feeling left in the dark.