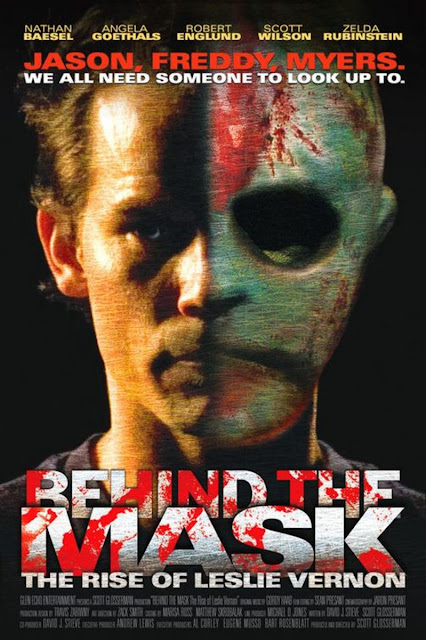 Rightfully so, 1996’s Scream gets a lot of credit for being the first post-’80s slasher craze to acknowledge sub-genres tropes, stereotypes, and mythologies that had spent a decade+ accumulating and solidifying. That it managed to do all this while also being a solid slasher that could stand on its own feet was a magical feat achieved by director Wes Craven and screenwriter Kevin Williamson. Ten years later would come the release of Behind the Mask: The Rise of Leslie Vernon, a film festival darling that took horror audiences by storm. Following in the same footsteps, Behind the Mask was another loving ode to the slasher films of yesteryear, but this time being more on the nose than its hip ‘90s predecessor. Where Scream would occasionally say the name “Freddy” or have Halloween playing on a television in the background during a party, Behind the Mask would actually join all of those film franchises together in one universe while also existing within it, and it does so by looping in another horror element that would postdate Scream by three years: the faux-documentary gimmick as reinvigorated by 1999’s The Blair Witch Project.

Shot to look like a documentary, Behind the Mask examines its subject, Leslie Vernon, a serial killer in training who strives to be as well known and infamous as his inspirations Freddy Krueger, Jason Voorhees, “Mike and Chucky.” If Christopher Guest had applied his mockumentary forte to the slasher genre, it would look a lot like Behind the Mask. It’s a parody, a satire, an ode, a dark comedy, a light comedy (sort of), and an old school slasher flick all in one. Its from this nutso combination where it derives most of its strength, but which also leaves it feeling somewhat at odds with its nature during the final act. 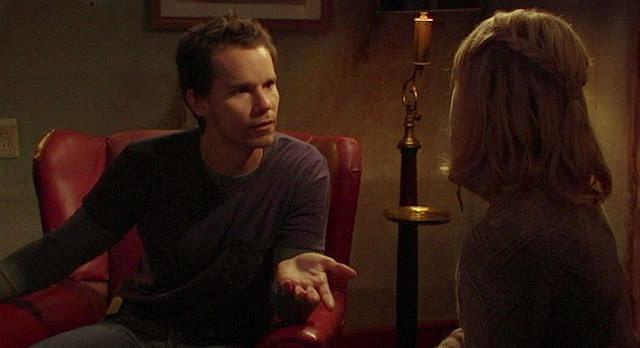 Right off the bat, it’s obviously a slasher fan’s dream to see the different worlds of A Nightmare on Elm Street, Friday the 13th, Halloween, Child’s Play (and more, I’m sure) existing in the same landscape. The very streets on which Nightmare and Halloween were shot appear in cameos (along with a very brief appearance from Kane Hodder, aka Jason in several Friday the 13th sequels, as the newest and creepiest resident of beleaguered Nancy Thompson’s former home). Robert Englund plays a small part very much in the Dr. Loomis mold of Halloween (whose character name, Doc Halloran, is a direct nod to The Shining) with Poltergeist's Zelda Rubinstein also appearing in a pint-sized role as a pint-sized librarian.

As you can see, writer David J. Stieve and co-writer/director Scott Glosserman are wearing their inspirations and it results in an often clever and often amusing horror/comedy that is proudly affiliating itself with an era and specific franchises birthed during that era that had previously been written off as silly and dismissible. Scream clearly adores Halloween but merely mentions other infamous titles matter-of-factly; Behind the Mask embraces every bloody installment of every bloody franchise with equal aplomb without passing judgment on those titles not as critically well regarded as others. (Of course, I would never take away Craven’s desire to include a line in Scream about the first Nightmare being good and scary “but the rest sucked.”) 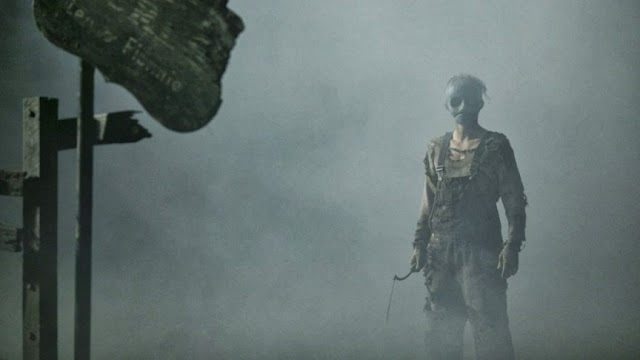 Behind the Mask loses a little steam during the final act as it drops the documentary approach and switches to a straight narrative, losing much of the quirky humor that derived from said approach. Don’t get me wrong, the film remains smart, as the film’s remaining victims look to the rules established by the slasher genre to figure out how they can survive the night, but without the more amusing humor, it then feels like Behind the Mask is taking the events it had spent most of its time sending up just a little too seriously. It’s obvious this was by design, cemented by one scene in which one of our supporting characters meets his bloody end at Leslie’s hands, but who tries to reason with him by telling him over and over, “Come on man, it’s me,” as if suggesting their prior friendship should be enough to neutralize Leslie’s murderous wants and goals. Well, it’s not, and it’s actually a really conflicting scene, because up to this point, Leslie had been a fun, well-mannered, and even lovable character whose goals of which the audience was very much aware, but whom they all liked, anyway. With him now being a dedicated mass murder, the change in his character is as abrupt as the change in tone. Again, this was intended and not some kind of accident, but upon my first viewing of Behind the Mask fifteen years ago, I felt conflicted about it, and I still feel conflicted today. And if there’s one thing a slasher shouldn’t be, it’s conflicting.

Despite that, Behind the Mask is an easy recommendation, a solid addition to the slasher sub-genre, and a love letter to the genre as a whole. Fun cameos, respectable performances, and some decent (but restrained) gore gags only add to its enjoyment. Glosserman has been talking up a sequel for years, and like all of Leslie’s murderous and masked colleagues, hopefully he can transcend from one-hit wonder and cross over into successful franchise territory.