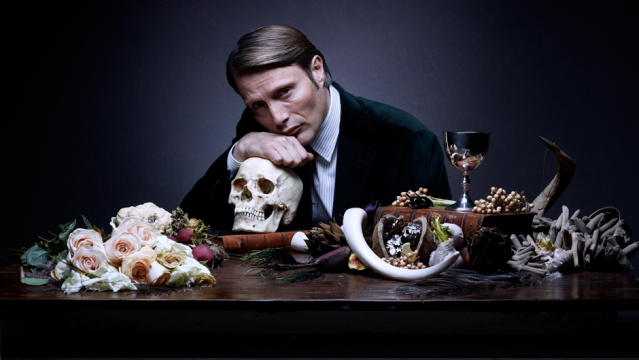 It feels dirty to use the word "reboot" when talking about NBC's short-lived but very beloved series Hannibal, but technically, that's exactly what it is. Iconic characters were plucked from Thomas Harris' celebrated novel series and reimagined, regendered, and reintroduced for newer audiences. But unlike Batman, Superman, or James Bond, the act of ever daring to think you could fill the shoes left behind by Anthony Hopkins, whose three separate performances as Dr. Hannibal Lecter earned one Academy Award and hundreds of millions at the box office, bordered on blasphemy. Props to Brian Cox for originating the on-screen version of the character in Michael Mann's underrated thriller Manhunter, but with that out of the way, Hopkins' iteration was always going to go down in history as the definitive take on the character. And that's because the character of Hannibal Lecter doesn't lend itself to semi-annual change-ups like the array of comic book heroes or international super-spies that by now have established the understanding that, yeah, every five to ten years, a new face is going to step up to play them. So when the Hannibal series was announced, everyone was very taken aback by the news, and rightfully so. You mean to say the same network that aired The Voice and America's Got Talent and, ugh, Grimm, had the gall to think they could not only do the Lecter series justice, but could sidestep TV standards and practices and include the grisly gore for which the novels and subsequent adaptations became known? It was one of those ideas that looked and sounded like a disaster, and it easily could have been, but Hannibal not only overcame everything stacked against it, and not only did it somehow out-gore HBO, it's likely to go down as one of the most beloved television series of all time, even if the audience wasn't there for it.

And it went off the air exactly four years ago today. 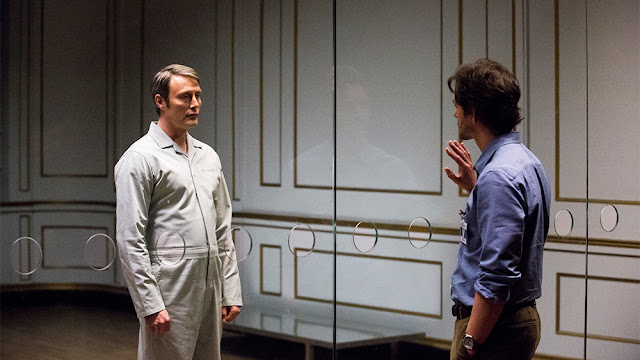 All the credit in the world goes to show-runner Bryan Fuller, who did the smartest thing anyone could have possibly done in his situation: kept the bare essentials of the series, maintained the most iconic and necessary aspects, and jettisoned the rest – enough to provide familiarity and keep the readers and film fans happy, but enough to create the distance needed so it didn't feel like holy ground was being desecrated. The casting also certainly didn't hurt, as it was impeccable nearly across the board (except for Scott Thompson, who, though lovable, was definitely miscast). Is it too early to predict that Mads Mikkelsen's take on Dr. Hannibal "the Cannibal" Lecter has become the new definitive version? Probably, although you'd likely have a legion of Twitter fans ready to preach that gospel. One thing is for certain, Fuller's Hannibal is the first visual medium to accurately portray the very damaged soul that is Will Graham, in keeping with his depiction in the first novel, Red Dragon. Though this was touched on with Manhunter, William Petersen's take was more distant and cold rather than haunted and broken. And gosh knows what Ed Norton was trying to do with Red Dragon besides cash a check to fund 25th Hour, but except for a moist brow and pit stains, his Will Graham seemed pretty all right. But this version of Will Graham is utterly damaged, and that's evident from his very first on-screen appearance during which he's walking through blood impossibly frozen in mid-air in the same way stars look plotted into the night sky – and this as he babbles to himself in the first person...as the serial killer responsible for the carnage.

Once you wipe away the serial killers, the violent art, the cheeky and recognizable mannerisms of Hannibal Lecter, and the touchstones of a post-CSI television landscape, what's revealed is what Hannibal was actually about the entire time – that two men from very opposite sides of the spectrum could develop mutual love for each other, and through their opposite natures struggle with this love and what it means. And this isn't to write off Hannibal as some underlying gay drama about two men in the closet, because that would just cheapen what Fuller intended. The love on display between Will Graham and Hannibal Lecter can be anything you want it to be – friendship, romance, brotherhood, or other. The kind of love doesn't matter – it's window dressing – but just that it's there, and that it's challenging both of their respective natures, is what's made the show so compelling. 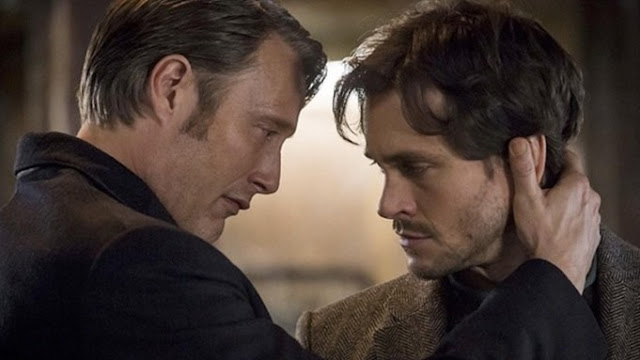 Hannibal was a critical favorite from its first episode, and what little audience tuned in did so with devotion. But, as some folks know and some don't, it doesn't matter how devoted the audience is, how beloved the characters are, and how much praise the show receives from critics. If no one's watching the show, then no one's watching the ads, and if no one's watching the ads, then companies aren't going to buy the ad time, and without that revenue, there is no show. That's the long and short of it, and it sucks, but that's business. So call it really misguided that NBC treated Hannibal like a ping pong ball, changing its air day three separate times, two of which occurred during the struggling final season, which saw it transition from a straightforward procedural/serial killer program to a European-set, esoteric, dreamlike quasi stage play filled with characters musings about their identities and natures and all kinds of heavy ideas that aren't going to grab newer audiences. (Not even scenes of kaleidoscopic lesbianism lured in the newbs.)

The third (and final?) season of Hannibal is disappointing only in the sense that, had it all gone according to plan, it would have instead served as the exact middle of the series' overall run. Seasons four through six were set to adapt all the other books, including the maligned Hannibal Rising, and conclude with a season of entirely original material, keeping both avid readers of the novels and viewers of the show entirely in the dark about how that would all end.

Instead we received a smidgen of Hannibal Rising married to a fleshed-out version of Hannibal and the third act of Red Dragon.  Though it was never part of the plan, Fuller and his show-runners did an excellent job of closing out all the lingering story lines, minus the somewhat abruptness of season three transitioning yet again halfway through – but only to include what was meant to come much later. Yes, it was certainly disappointing that the series never matured to the degree of reaching the story arc of The Silence of the Lambs – the most famous novel and adaptation of them all – but what's even more disappointing is never getting to experience how Fuller's version of that arc would have looked, or potentially seeing Will Graham and Clarice Starling on screen together. (Gasp! My nerd heart!)

Hannibal also liked to have its fun, and not just within Thomas Harris' Lecterverse. A fair number of homages and nods to other famous horror properties were sprinkled throughout. Some of these were very under-the-surface, including a brief moment during season three while Dr. Bedelia Du Maurier (Gillian Anderson) is shopping in a store filled with fine looking dinner table decor where a slight riff on selections from Goblin's score for George A. Romero's Dawn of the Dead can be heard on the soundtrack. (Amusingly, Romero himself enjoyed a brief cameo in The Silence of the Lambs, along with famed producer Roger Corman, who gave Jonathan Demme his start in directing.) And then, of course, there's the cameo from the bathroom featured in The Shining: 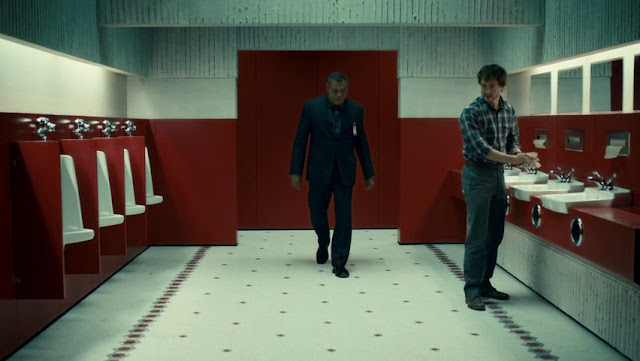 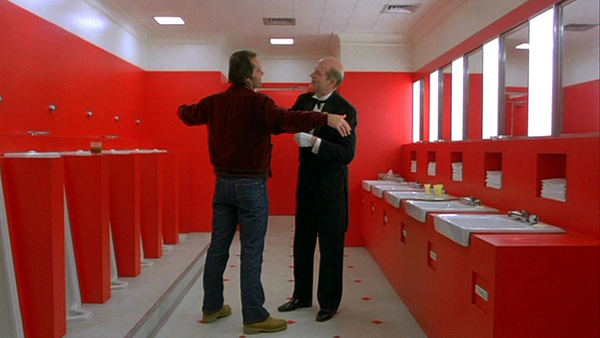 Bryan Fuller has openly stated (lovingly) that he wanted Hannibal to maintain the certain level of pretension that was evident in the writing of Thomas Harris' series. Not only is that approach present in the philosophical and at-times poetic dialogue, but in the flawless production design and visual presentation – lots of slow motion, lots of reverse engineering, but never in a way that feels exploitative. The visual tricks serve the show's aesthetic and the minds of its characters. Even if the plot or characters of Hannibal do nothing for you, there's no denying it's a gorgeous show to look at. Colors are vivid, though they often depend on shades of gray. Shadows drape across nearly everything; even scenes set in the height of daylight maintain a certain darkness. Detail is as fine as Dr. Lecter's smashing wardrobe.

Sometimes it's the less showy audio presentation that makes for the most immersive experience – this is the show's design. Hannibal is a very intimately presented show, showing restraint and preferring the sound of moving air over garish and cheap Foley effects. The unorthodox and unusual musical score by composer Brian Reitzell (30 Days of Night), filled with clangs, bashes, and non-melodic ominous tones created a sound that would somehow define a show that was, itself, without definition. Working well in tandem with the show's quiet design, Reitzell's musical design – relying often on the pounding of drums with loosened drum heads and slamming metal – would shatter the perceived solitude induced by the art-like images to unnerve the audience with little effort.


To reiterate, NBC kept Hannibal going for as long as they could while remaining fiscally solvent. Unfortunately the viewership wasn't there to justify keeping the show on the air. In this age of Hulu and Amazon/Netflix Originals, everyone held out hope that the series would be picked up by another distributor. For a while, Fuller et al. were hopeful – and media websites were goodheartedly but irresponsibly muddying the waters by predicting the series would "likely" be picked up – but so far, there have been no firm developments in this regard. Maybe we can look at Lionsgate calling its home video release simply "Season Three" rather than "The Final Season," which has become the home video tradition for television swan songs, as a sign of hope that we haven't seen the end of Bryan Fuller's Hannibal.

Does season three mark the end of Hannibal, or is there life in this new universe yet? Fuller et al. are optimistic about completing the arc in movie form, which is a nice idea but seems unlikely. How does one adapt a series that was cancelled due to low viewership into one or several films if funding has proven to be an issue? If anything, Fuller has established he's full of surprises, so never say never. The final moments of season three work well as both a season finale and a series finale, so should this, indeed, be the end of the strangest courting ever made, let it not be said that Hannibal didn't go out in style. 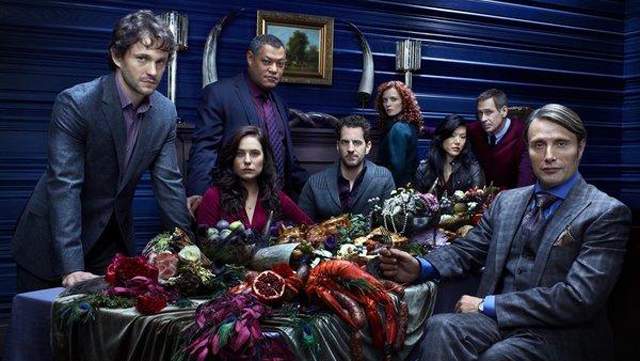