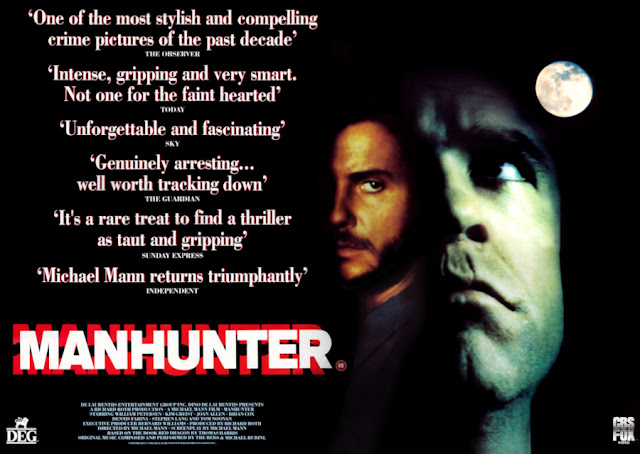 I have kind of an odd history with Manhunter.

It was 2001, and the first post-Silence of the Lambs Hannibal Lecter film was being released to huge anticipation and fanfare. (Ridley Scott's Hannibal was released a mere nine years after The Silence of the Lambs, yet it felt like an eternity had passed in between; meanwhile, eighteen years have passed since Hannibal was released in theaters, but it feels like it just came out, doesn't it? Tell me, how old do you feel?)

In "honor" of Hannibal's impending release, Anchor Bay Entertainment released Manhunter on an anniversary VHS. "Hannibal Lecter's legacy of evil begins here" the cover art boasted. I was curious about the film, never having heard of it, let alone seen it. And I was warned against it. "It's so bad," I was told. The film was boring. Poorly made. "Some weird, no-name guy" was playing Hannibal Lecter.

Refusing to fold to such pressure, I brought it home anyway to give it a whirl. And my first viewing of Manhunter could best be described as conflicting. Chronologically, I don't recall if I had yet to read through the Hannibal Lecter novel series, though I since have, so it wasn't a matter of compulsively comparing the events of the film to the events of the book. It was more than I had no choice but to take the film at face value, doing my best to reconcile that The Silence of the Lambs had seemed to prove the final word on the subject of Hannibal Lecter. Fair or not, The Silence of the Lambs had already cemented the idea of who Hannibal Lecter was: how he sounded, looked, spoke, and in what way he figured into the conflict. Manhunter, based on the first novel of the Hannibal Lecter trilogy, Red Dragon, had no choice but to pale in comparison. After all, the same aesthetic--an FBI agent relying on the intellect of a captive serial killer for help in catching another killer at large--had already been established. Not only that, but Lambs hewed closer to the horror genre, with its gory and graphic depictions of exhumation, crime scene photography, along with its wild, awe-inspiring, and taboo-shattering performance from Ted Levine as Buffalo Bill. It was difficult to appreciate Manhunter from the outset because, following the discouragement in seeing the film, I only managed to see its flaws. But, like most things, perception can change over time. And as I became more and more attuned with who Michael Mann was, and how a Michael Mann film felt, it led me into a reintroduction to his take on the Hannibal Lecter legacy, and this time around, I found a lot more to appreciate.

Manhunter is the Hannibal Lecter story reimagined as a police procedural. Efforts were made to maintain Lecter's (sorry, Lecktor's) cunning and intimidation, but to also dial down the grislier aspects from the character of the novel. (He's never once referred to as "Hannibal the Cannibal.") More interested in crafting a psychological thriller than the overtly horrific 2005 version of Red Dragon and the television series Hannibal, Michael Mann honed in on the effects of "the gift" that Will Graham possesses--and on how easily a person with that kind of gift can begin to lose a sense of who he is. But in doing this, his character came off as hardened, rather than the fragile and quite vulnerable version recently essayed by Hugh Dancy on the short-lived NBC series. (The less said about Edward Norton's "Nah, I'm good" take on the role, the better.) Because of this, Peterson's iteration of Will Graham was difficult to embrace at first, and at times, it still is. He seems less like a person trying to enjoy retirement in a Floridian pastel paradise with his wife and son, and more like someone insisting on this paradise and this family in an effort to enforce his own sense of normality. Right off the bat he seems unable to fully connect, emotionally, with his wife or his son, and whether this was purposeful on Mann's part or a disconnect between Peterson and the role is unclear. What is clear, however, that as appreciation grows over time for a film at first misunderstood, Peterson's Will Graham--hardened or not from his years of criminal profiling--is a fascinating portrayal of a man on the edge, obsessed with doing what he knows is right, to the point where he risks his life, as well as those of his family.

Of all the novels in the Hannibal Lecter trilogy, Red Dragon is most suited toward Michael Mann's sensibilities. Seemingly not that interested in the horror genre (The Keep notwithstanding), Red Dragon makes the easiest case for Mann to sidestep the horrific in favor of the psychological. It's in keeping with the kind of stories he likes to tell: the cop against the thief; the righteous against the corrupt; whatever Miami Vice was. And that's the most satisfying thing about Manhunter--it's vintage Michael Mann. Disparate conflicts aside, Manhunter wouldn't feel out of place in a double bill with his James Caan heist film Thief. From his leaning on cool blue hues to his use of ethereal (and, yeah, kind of dated) musical soundscapes, it's Michael Mann who makes Manhunter such a great film (with respect to novelist Thomas Harris, of course).

Hack extraordinaire Brett Ratner did his best to replicate Manhunter's class and appeal with his "official" adaptation of Red Dragon by doing what he does best--stealing good ideas from better filmmakers. Hiring Manhunter's director of photography (Dante Spinotti), and The Silence of the Lambs' screenwriter and production designer (Ted Tally and Kristi Zea, respectively), all Ratner managed to do was make a very okay film with an amazing ensemble cast, all of whom are utterly wasted. Naturally it made money and was considered quite the success--neither thing Manhunter had been able to boast upon its 1986 release.

There's been a slow Manhunter resurgence over the years, likely due in part to the boom in home video collecting beginning in the early '90s, which allowed new audiences to discover the redheaded stepchild of a rather prominent horror franchise. Many ardent supporters go as far to say that it's superior to The Silence of the Lambs in every way. While that last part isn't true (man-love for Mads Mikkelsen aside, Anthony Hopkins' first take on Hannibal Lecter will always be definitive), that doesn't make Manhunter less worthy of a re-reintroduction to high-def collectors. Fans of psychological thrillers will find a lot to analyze and pupils of Michael Mann will enjoy seeing an early effort containing signs of things to come.

Manhunter isn't the definitive film from the Hannibal Lecter universe, but it's nearly there. As long as The Silence of the Lambs exists, Manhunter will always be second in command, but that's just fine considering the enormous legacy Lambs has gone on to establish and rightfully earn.

With the cancellation a few years ago of the cult television series Hannibal, which proved that established characters could shake free of their constraints and be re-imagined for new audiences, perhaps a few more folks have opened their minds to the possibility that the Hannibal Lecter legacy doesn't stop and start with The Silence of the Lambs, however oddly Hannibal Lecktor may want to spell his name.