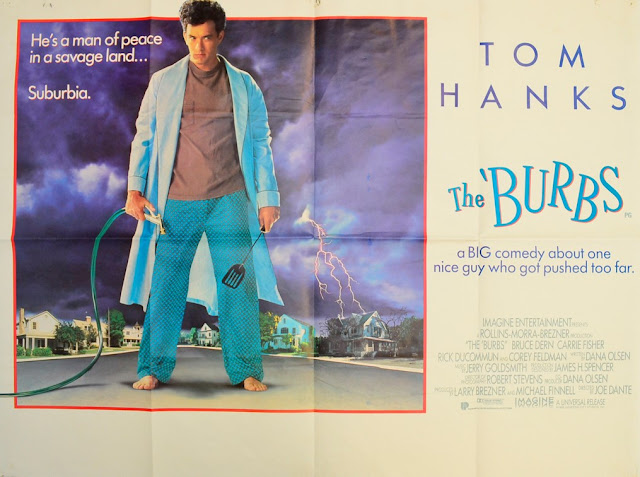 Next to The Blues Brothers and Ghostbusters, The Burbs is probably my favorite all-time comedy. It’s one that I’ve been watching and laughing at since I was a kid — right around the time when I was also developing my love for the horror genre, which made The Burbs feel like an ideal way to also get in my comedy kicks. The script, naturally, conveys that blending of genres (make no mistake, though — this is much more comedy than horror, with the slightest twang of a western), but it was also thanks to the sensibilities of director Joe Dante, who has worked in every genre there is, but who has also directed some bonafide horror classics (the Gremlins films, The Howling).

Because of this, and aside from the obvious morbidness and murderousness of the plot, The Burbs is a Rear Window parody rife with nods and homages to horror titles from The Exorcist to The Sentinel, and the underrated Race with the Devil. (Tom Hanks’ character, Ray Peterson, even suffers a nightmare straight out of that latter satanic thriller.)

Hanks and Rick Ducommun (who didn’t quite get along during filming), along with Bruce Dern, make for an absolutely wonderful and hilarious trio — Hanks’ Ray is the dry and glib straight man slowly sucked into the mystery, Ducommun essays childlike immaturity with next-door neighbor Art, and Dern plays, basically, your wacky conservative uncle — a gun-loving military nutjob with an all-fatigue wardrobe — and he’s a fucking delight. Dern, especially, wraps his limber arms around his character of Mark Rumsfield, clearly having a great time playing such a broad archetype. (The actor has mellowed during his later years, keeping closer to dramatic roles, although he did appear in another Dante effort: 2009’s The Hole.) Corey Feldman also appears as a sleuthing neighbor, rejoining Dante after Gremlins, and basically playing the Greek chorus for the audience. Wendy Schaal as Bonnie Rumsfield plays the most undervalued member of the cast, often deserving big laughs that go unnoticed, especially during the neighbors’ intensely awkward first meeting with the mysterious Klopeks. Her alarmed or mystified reactions to Hans Klopek are some of my favorite scenes in The Burbs’ entirety.

The Burbs is one of those rare pre-90s comedies that never feels dated, and everything that was funny about it thirty years ago is still just as funny today. (The frantic zoom-in/zoom-out of Hanks and Ducommun screaming at a human leg bone, which purposely goes on for just a hair too long, is still one of the best gags any film has ever had — period.) And there’s every kind of comedy on display: slapstick, sight gags, and — my favorite — the surreal and the absurd. The Burbs is at its best when it’s almost self-aware, such as the aforementioned leg bone scene, or when our characters recognize the sheer madness of the conflict in which they are engaged. (“I’ve never seen that. I’ve never seen someone drive their garbage down to the street and beat the hell out of it with a stick. I…I’ve never seen that.") 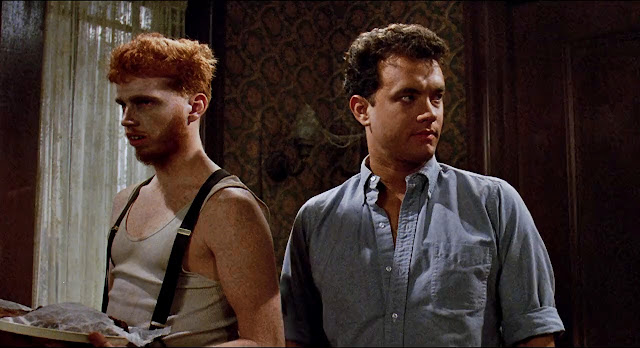 Dante, who has built a career on horror-comedies, uses perfect timing and dramatic camera angles to accentuate the more amusing aspects of the script’s concept. At one point, when Art and Mark appear on the driveway of Ray’s house to collect him so they can continue their spying on the creepy new neighbors, Ray’s wife, Carol (a wonderful Carrie Fisher), tells them from an upper balcony that Ray won’t be joining them. Dante shoots this scene from both perspectives — from Carol looking down on them, and Art and Mark having to look up. As intended, it presents Carol as the mother figure, telling two neighborhood “kids” that her son isnt allowed to come out and play. And for good measure, Art kicks the ground as the two walk off in disappointment. Meanwhile, Ray cowers in the background half obscured by a doorway. If The Burbs were to be directed by anyone else other than Dante (and okay, maybe John Landis), then it shouldn’t even bother existing. Its DNA is too intertwined with Dante’s ease at this kind of humor and his willingness to poke his audience in the ribs and say, “Isn’t this just a gas?”

Hanks had a tremendous run in the ‘80s with a string of successful comedies, including Bachelor Party, Big, and The Money Pit (I’ve still never seen Splash — sorry), but The Burbs remains the most underrated. A combination of its somewhat morbid content and its offbeat humor has prevented it from being as celebrated as Hanks’ more obvious titles, which is a damn shame, but new collector’s editions of films like these only prove their enduring legacy and offer the chance to become reacquainted with yet another lost classic.