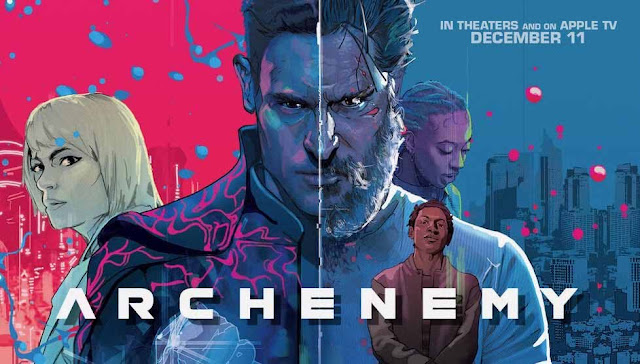 Re-examining the anatomy of the superhero movie isn’t a new idea, with two polar extreme examples being the 2008 alcoholic superhero movie Hancock with Will Smith and up to 2019’s Brightburn, which asked a heady question: what if Superman had been born evil? Archenemy, the newest to join this fold, comes courtesy from SpectreVision, aka producers Elijah Wood, Daniel Noah, and Josh C. Waller. If you have been paying attention to the horror genre for the last several years, there’s no doubt you’ve both seen and appreciated their most recent output – the two Nicolas Cage vehicles Mandy and Color Out Of Space. Based on these two alone, it’s evident that SpectreVision aren’t interested in the obvious, the easy, or the norm. If nothing else, Archenemy, directed by Adam Egypt Mortimer (Daniel Isn’t Real), feels like both a visual successor to and the third part of a spiritual trilogy begun with those two horrific tales of vengeance and the otherworldly. Like those, Archenemy boasts insanely beautiful visuals founded on fluorescent pastels, but which takes one step further by combining them into comic-book-pane-inspired animation to explore Max Fist’s backstory – the crux of his character and the backbone of the is-he/isn’t-he sub-conflict. Archenemy takes a familiar concept, deconstructs it, and rebuilds it from the ground up, borrowing conceptual elements of Christopher Nolan’s ultra-realistic take from the Dark Knight trilogy, but without abandoning the comic book aesthetic that created this genre in the first place.

Archenemy is at its best when it forces the audience to wonder if Max Fist (Joe Manganiello), a drunken, swaggering, beaten up homeless man who rambles about his former home, Chromium, is telling the truth when he talks about being a former a superhero who tried to inspire his people before a violent blowout with Cleo, the “villain” of the piece, caused his expulsion from their world. The other possibility? That Max Fist is “a schizophrenic who lives under a bridge,” and has invented this version of himself to help him understand and compartmentalize a past and unknown trauma. Though filmed in New Mexico, the rundown city where Archenemy takes place is only ever called Hamster City (a possible egotistical nickname bequeathed by Hamster, one of the main characters), but modeled to look like Detroit, which can’t help but conjure memories of Robocop, another pulpy tale in which the leftovers of a former hero are re-purposed to commit major violence against the scum of the city. Though Archenemy never reaches those same glorious violent heights, it proceeds with a confidence in itself that makes its scenes of combat feel like more than just going through the motions. Archenemy works much better – and is, in fact, much more of – a character study about a broken man with a broken mind trying to navigate a new world he doesn’t understand. 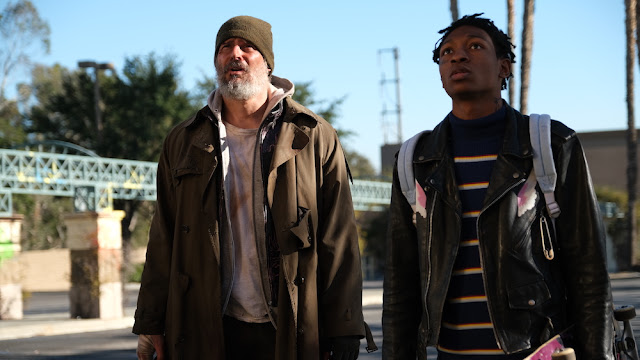 Manganiello is terrific in the role, offering the kind of range he is seldom offered the chance to embrace. With a low and gravelly voice straight from the throat of current Dolph Lundgren, Max has lost every reason he ever had to live in the first place, spending his time binge drinking and fist fighting concrete walls. It’s only when he comes to begrudgingly befriend aspiring writer Hamster (Skylan Brooks), who yearns to write for a BuzzFeed-ish outfit that produces viral content, when Max rediscovers what it means to fight for someone else. Though this new friendship reawakens his sense of purpose, it also manifests a bloodlust that has either been dormant, or which has been triggered for the first time, turning Max Fist into a man both heroic but uncontrollably dangerous. When Hamster’s sister Indigo (Zolee Griggs), a street-level drug dealer, gets herself into trouble with her psychotic boss known as The Manager (Glenn Howerton), let’s just say the slow-motion blood flies all over the screen.

Archenemy has a lot of big ideas, but, despite a somewhat shorter running time than other films from this genre, it feels overstuffed by the end and doesn’t quite land a handful of third-act twists. Still, it’s already earned enough goodwill and genuinely wants to end on an earnest note that it’s easy to forgive such shortcomings. The truth is, Archenemy should be like catnip to comic book junkies. From its design to its familiar but altogether new story, and of course, its violent artistry, it’s a confident twist on an old classic; it’s a quieter title when compared to any of your typical Marvel movie juggernauts, but unlike those blockbusters, Archenemy at least has its own identity – however flawed it may be.