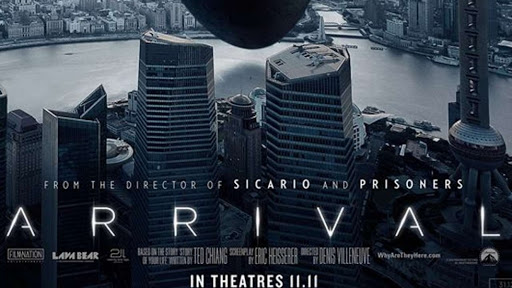 At times it feels like the theater has gotten so used to sci-fi films where laser guns are zapped and mutant alien races wage war on Planet Earth that it’s easy to forget the genre can still be used for messages and morals of merit. Stemming back to the 1950s with The Day the Earth Stood Still and Invasion of the Body Snatchers – both about the imminent threat of communism (although some theorize the latter was actually about homosexuality) – the genre was once used for purposes beyond intergalactic pulp escapism. Like any other genre that’s well utilized and handpicked to effectively tell two stories at once – the surface story and the hidden story – the sci-fi genre has a lead over its counterparts in that the very tenets of its foundation are based on being limitless. As science knows no bounds, neither does science fiction.

When watching Arrival play out during its opening moments, it’s hard to disassociate it from its immediate and more well-known colleagues. Scenes of people looking across the landscape in awe will trigger memories of Spielberg’s Close Encounters of the Third Kind. Bystanders huddling around televisions will (perhaps unfortunately) recall Independence Day. And Arrival, along with these associations, hits a lot of familiar beats that call forth concepts that are necessary to tell its story. But what sets Arrival off from the rest of the pack, despite its similar surface story, is its hidden story – or really, it’s double-hidden story. Because in the multi-layered Arrival, you slowly piece together the story you think is hidden until unearthing the one that you didn’t see coming, which just happens to have the power to bring you to your knees.

As more audiences discover Arrival, their reaction will be inevitably polarizing. If you were bothered by the ambiguous nature of Christopher Nolan's Inception or the abstract philosophical nature of that same director’s Interstellar, you’d be advised to stay far, far away from Arrival. Because multiple viewings will be required before it’s possible to begin piecing together what exactly took place on the day the Heptapods came to earth. 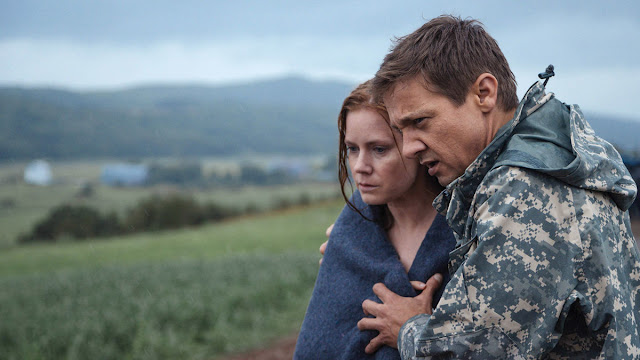 By purposeful design, Arrival is dark and dour. Even scenes set in exterior environments are purposely dim. Arrival was meant to look this way because the outlook for our planet isn’t good. The mystery of why the aliens have landed pervades across every inch of the screen. (There’s another reason why everything looks so dour and void of vibrant color, but to discuss it would ruin one of Arrival’s many surprises.)

So much of the story is told through Arrival’s sound design, from the musical score by Jóhann Jóhannsson to the creation of the Heptapods and their space ship, to a slight and uneasy ambience that filters through almost (almost) unnoticed during many scenes. The film opens and closes with what has apparently become a controversial use of Max Richter’s famous song “On the Nature of Daylight” (used, among other films, in Martin Scorsese’s Shutter Island), and despite what you might think of the choice, there’s no denying the emotional power that the song carries with it.

Director Denis Villeneuve continues a career of unique, dark, and somber films with Arrival, which so far might be his best. Not necessarily his most accessible, but — and despite the inclusion of aliens — possibly his most relatable, Arrival is a gut punch in the beginning, throughout, and especially at the end, and all of them for different reasons. There were tears on my face before the first five minutes had even concluded, and this in a movie about an alien invasion. Please don’t miss it.