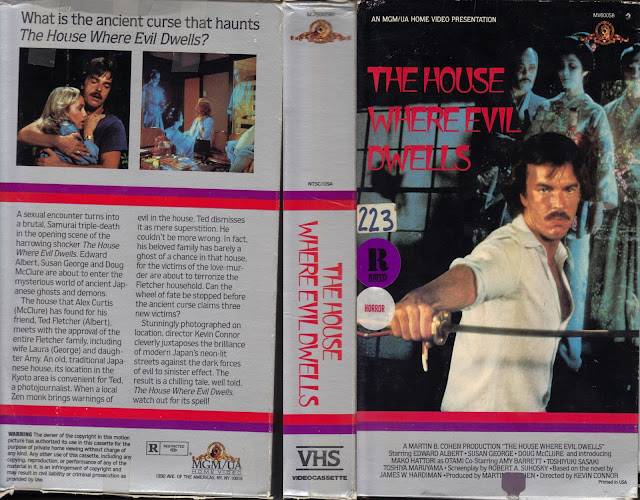 Long before the short-lived J-horror phenomenon breached American shores, resulting in one good remake and boatloads of bad ones, The House Where Evil Dwells was already proving that Japanese ghosts could be so, so entertaining. Best described as a bold-faced rip-off of The Shining attempting to coalesce with America's then-fascination with everything ninja, this 1982 oddity about an American family living abroad while its patriarch finishes writing his "story" - and who then confront a trio of hilarious looking ghosts  - has to be seen to be believed. Hopefully the included screen grabs have done a pretty good job of indicating the sheer stupidity on hand and have enticed some unaware lovers of cinema cheese into pursuing this title: how utterly mad The House Where Evil Dwells is willing to go is a thing that every horror fan needs to experience.

The opening of the film, in which a full-on sexy affair is taking place while the unknowing husband is out walking around holding his lantern thing you only ever see in movies set in Japan, does a pretty good but albeit strange job of establishing the conflict of the plot: after the cheating wife gives to her lover a netsuke (a small totem) that she obtained from a witch, and which seems to be of a woman fucking the devil, the husband comes home to see their tryst in full kimono-shedding mode, so he understandably flips out and kills them both before committing harakiri, which is suicide by blade, not the former sports newscaster. (You know, this guy.)

At this point - yep, you guessed it - our American characters enter the story, and the house where all this sexy murder stuff went down, and are immediately haunted by the aforementioned ghosts of an Asian flavor. 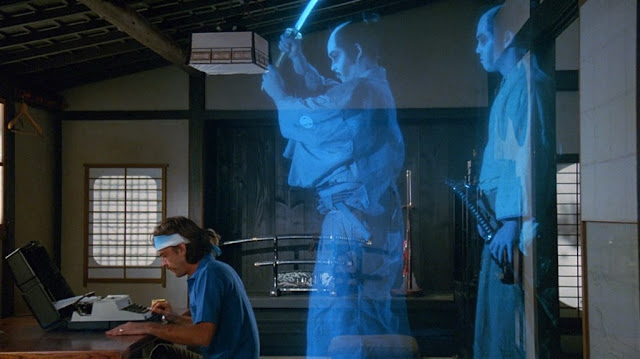 The House Where Evil Dwells is insane, lovingly pedestrian, and earnest in its stupidity. Its attempts to be horrific consist of blue-tinted superimposed ghosts walking around, knocking shit off the wall, or temporarily possessing our married couple characters solely to puppet them into saying really inappropriate things and cause marital distress. But what those silly ghost appearances set up, the screaming ghost faces appearing in soup, or the hilarious moaning haunted crabs that chase a young girl up a tree, definitely help to knock down.

What sucks about The House Where Evil Dwells - that is, beyond the typical kind of suck you come to expect from very low-budget horror flicks - is its pace. To be honest, unless ghostly things are occurring, The House Where Evil Dwells isn't really that interesting. It's slow, and dull, and momentarily brought to life by okay performances (unless we're talking about the daughter character, who's at her least offensive when she's not saying a word). If blue ghosts are egging each other on to commit harm or tomfoolery, then great; otherwise, The House Where Evil Dwells is boredom on celluloid. Still, it's a house where I'd want to spend all my time where I'm probably shooing demon crabs out of my nagaya with my bamboo houki.

Fans of campy and "oops, it's stupid!" horror entertainment shouldn't miss it, or else moaning ghost faces will end up in your soup, and they will be so awful.