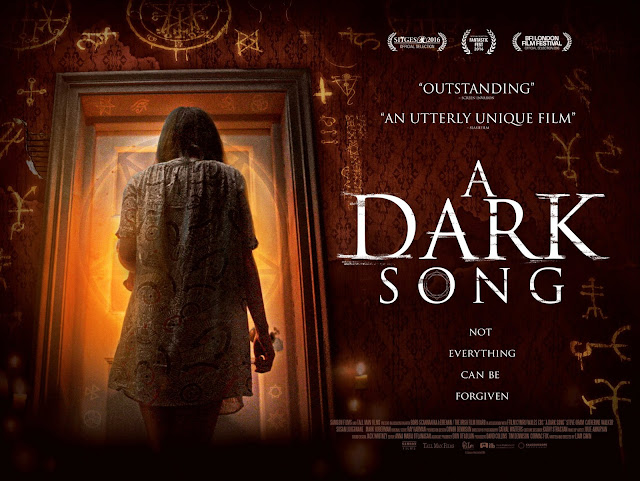 At some point after 2002’s The Ring, ghosts made a spirited (haw!) return to cinema, regaining their stature as one of the world’s first on-screen horror villains. Whether it was the pillaging of J-horror creepy wet ghost girls, or remakes of much more high-profile Hollywood films (The Haunting, for example), those undead, wispy/willowy, ectoplasm hurling specters were intent on scaring the dickens out of audiences. (I used the word “dickens,” so you know I mean it.) Sometimes it was a parapsychologist searching for emotional retribution, sometimes it was a bunch of hapless kids seeking the truth, and sometimes it was just a person in the wrong place at the wrong time. Hardly ever was it someone going out of their way; risking personal health, comfort, safety, and even pride; paying a ridiculous amount of money, and dedicating MONTHS of shut-in living not just to see a ghost but to conjure one using dark magic. But that’s what A Dark Song presents, taking the well-worn concept of a big creepy house and a one creepy ghost but reinventing the “how” in an eerie, disturbing, and icky way.

A Dark Song introduces itself as a slow-burn, Polanski, Repulsion-like thriller, taking its time establishing the rules and mood of this universe. And as the ghostliness begins to unfold, all the trials and tribulations our poor Sophia has endured weighs heavily on our minds, leaving us to wonder if what she’s experiencing is real, or if she’s finally cracked under the pressure. Relying very little on bloodletting (there’s really only a goblet-sized amount – literally) and more on tension and intensity, A Dark Song has a very specific way it wants to tell its story, and it’s intent on not scaring its audience using cheap means. 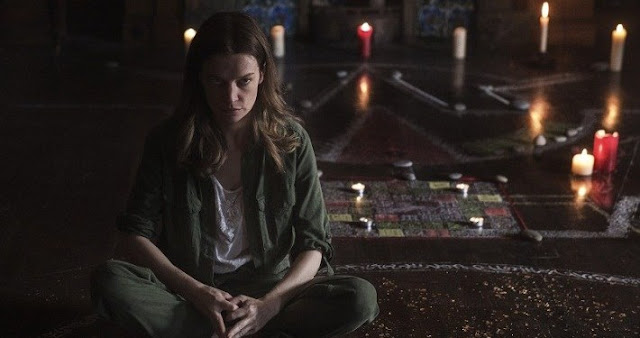 A Dark Song only falters in its familiarity – the ghostly figure passing by unseen in the far background, the footsteps in the house, the bad omens that present once the rituals have begun – but it handles this familiarity well, teasing them rather than leaning on them. And it builds to a nutso finale that takes inspiration from the Hellraiser series, Jacob’s Ladder, and even Michael Winner’s little seen oddity The Sentinel – your personal diet of horror consumption will determine how unnerving this sequence is.

A Dark Song takes place in a dim, bleak, dreary mansion in the middle of nowhere. Not much for color, although any sequence relying on candlelight in a dark room (there are lots of these) look very striking. The sound design makes full use of ambiance and ghostly sounds to unnerve the viewer.

Those looking for Conjuring-type scares may not find much to grasp onto until the finale, which for most of these viewers may be too late. But for those with the patience to see it through, A Dark Song promises a new twist on an old classic and packs somewhat of a punch by its end.