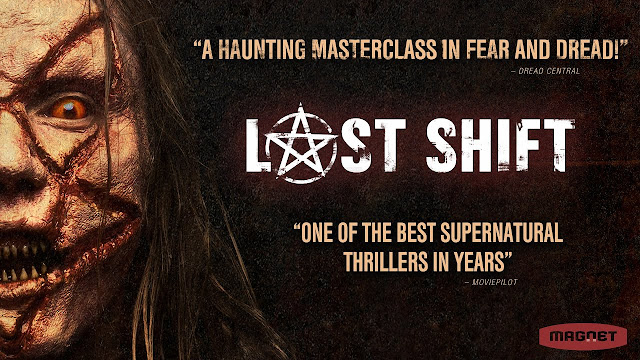 The more learned viewer will definitely notice right off the bat that Last Shift is borrowing from John Carpenter's Assault on Precinct 13, but this time instead of a small band of cops and clerks taking on roving attacking gangs, it's just one rookie cop taking on the demons/ghosts/bloody secret history of the decommissioned police station of which she's in charge for its final shift. And it's not just thematically that director Anthony DiBlasi (Dread) is looking to Carpenter for inspiration, but also for the old-school approach.

Like Assault on Precinct 13, there are very few visual effects employed to scare the viewer; except for the minor use of green screen, nearly every gag is done with editing and camera tricks, and all of them work. There is no CGI on hand to offend the eye. And the cast is limited to just a handful of people, with most of Last Shift being a one-woman show (Juliana Harkavy). 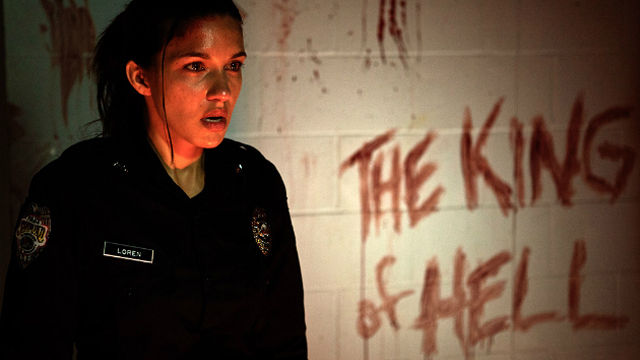 Last Shift feels comprised of other horror films, some celebrated and some not (and that's not a condemnation). Along with Assault, there are shades of Silent Hill, The Shining, and Jacob's Ladder, mixed with real-life horror aspects, especially Charles Manson and his so-called family. Though a digital shoot, a '70s-era level of grain has been applied, preserving that old school approach toward which Last Shift is striving. What that ultimately achieves is something old and something new - old techniques married to new sensibilities - and it's created an effective horror offering that manages to out-scare most major horror theatrical releases all the way back to 2013's The Conjuring.

Most importantly? Last Shift is seriously scary, falling back on another '70s concept beyond Carpenter and that specific era of cinema: the fear of encroaching satanism. The boogeyman and his followers featured in the flick are not Charles Manson and his Family, and are never called such (his name is John Michael Paymon, the surname being that of a demon most recently immortalized by another seriously scary flick, 2017's Hereditary), but at the same time, they are. The hallmarks are there: the long-haired, crazy-eyed, charismatic leader; the hippie chicks who follow him around; and his very disturbing agenda. 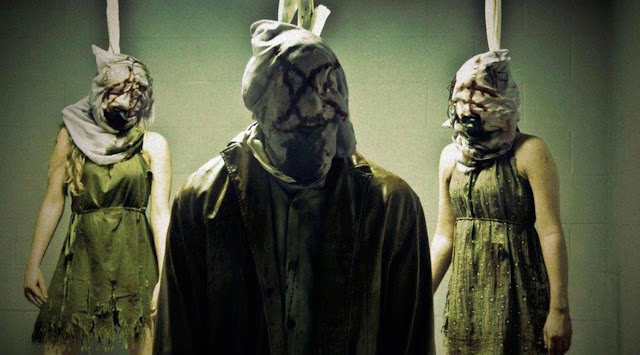 DiBlasi's efforts in the horror genre have so far been worth at least a single watch, with each subsequent film being superior to the previous. Last Shift is his best effort to date. If this trend continues, his name will be one to watch with each new project he announces.

One of the best-kept secrets of 2015, Last Shift’s intimate location and strong performance by the lead heroine really helps to put you in the middle of the horror she's experiencing. Whether or not you'll find it creepy obviously depends on your sensibilities as a horror fan, but one thing that's certain is Last Shift is going to try its damnedest. Once the horror starts, it doesn't let up until its vicious finale, and for that alone, Last Shift is worth praising.