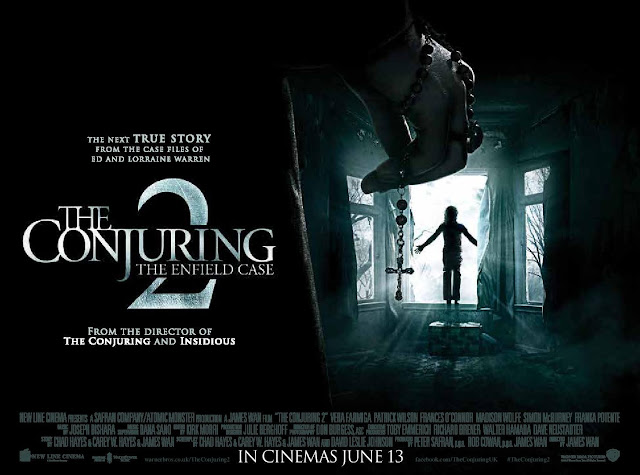 Every time James Wan threatens to retire from the horror genre, it breaks my heart a little -- not to mention strikes more fear in me than all the ghosts and demons he's conjured (shut up) from his imagination. The horror genre never truly dies, despite what weirdos like to claim about the '90s, as there are always up-and-coming filmmakers and interesting indie horror films that will stand the test of time. However, so few consistent filmmakers come along that not only make great contributions to the genre, but make films that have the power to remind both critics and audiences that the horror genre is capable of being classy, well made, and even emotional.

I could rattle off a half-dozen horror filmmakers who have proven consistency with both quality and scares -- Ti West, Jim Mickle, Adam Wingard -- but no one is doing what James Wan is doing: straddling that line between satisfying mainstream audiences with films not too far outside their comfort zone while also finding ways to shock and scare horror-loving fandom who have seen all the tricks countless times before. (That last sentence makes me feel bad, so major hat tip to Mike Flanagan, who is doing the same thing.)

The Conjuring 2, like its predecessor, contains very little that hasn't been seen a dozen times already in films both classic and campy. We've seen the ghosts and the demons, we've heard the loud knocks in the middle of the night or the creepy children hiding in the darkness, and we've seen the power of God, harnessed by the mortal, vanquish these things back into the pit, but Wan has an uncanny ability to use these old tricks in clever new ways. The Conjuring 2 contains much of Wan's repertoire -- the clever use of editing giving creepy figures snapshot movements, the yellow-eyed demons, the unseen monster in the darkened corner -- but he's also got a whole bag of new tricks to try, and all of them work. The Crooked Man, for instance, doesn't quite feel as grounded as the rest of the ongoing terror, but its construction makes for the eeriest scene in the entire film. The Conjuring 2 is more ethereal, more dreamlike, more daring in its risk-taking. And it makes for a more satisfying experience with the Warrens.

What makes The Conjuring 2 stand out from the pack, and even from Wan's previously successful horror outings, is the relationship between Ed and Lorraine Warren (Patrick Wilson and Vera Farmiga), playing the real-life married couple who spent decades doing the kind of research that the franchise only touches on. As Wan says in the supplements, he wanted to create a love story for them but disguise it as a horror film, and in that regard he was successful. Like the first film, he takes the time out from the horror to offer them -- and the haunted Hodgson family -- small moments of peace. Scenes like Ed playing the guitar and singing an Elvis song to the family -- but really to Lorraine -- or even the ending, when Wan forgoes the anticipated creepy/shock final scene in favor of something lovely and beautiful, are what make The Conjuring 2 such a success. Putting aside how "real" and "true to life" the Conjuring series claims to be, the films, regardless of what you believe, also wholly exaggerate the stories that inspired them. However, in the midst of this, Wan's ability to make his characters feel like real people are what set the series off from the rest of the genre. 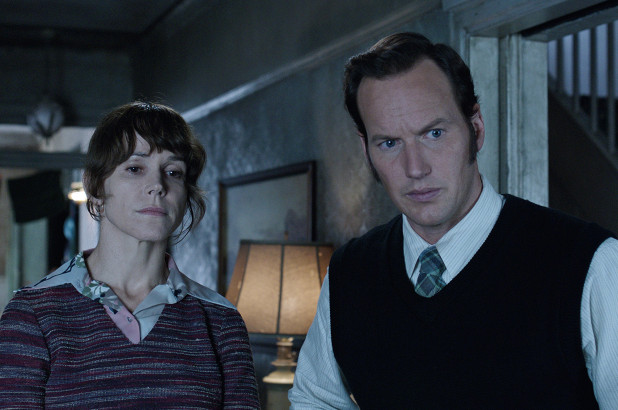 Avoiding the sophomore slump, The Conjuring 2 boasts a less clunky and more naturalistic screenplay than its predecessor, and with less characters to focus on, a bit more streamlined. Knowledge of the first film isn't required to enjoy the sequel, but by now the Warren dynamic and what they do is established and it helps in getting to the action a little quicker. Wilson and Farmiga -- especially the latter -- are fantastic in their roles, with Wilson toning down his take on Ed, making him less gruff than his prior iteration. The Hodgson family as well, led by mother Peggy (Frances O'Connor) and terrorized daughter Janet (Madison Wolfe, trying on a genuine sounding accent), are fleshed out into real people. The Conjuring 2's opener serves as a concluding bookend to the tease on which the first film ended -- that of the legendary Amityville controversy, which inspired the never-ending film series The Amityville Horror. (While it's a bummer not to have gotten an entire feature film dedicated to this particular case, I can understand the legal quagmire it would have the potential to become.) But the bits we do get -- the DeFeo massacre, which was a very real occurrence, and even an impressively simple recreation of perhaps the most famous photographic "evidence" of paranormal proof in the Amityville home -- are more satisfying than probably every officially sanctioned Amityville film so far.

Director of Photography Don Burgess successfully recreates the look of Wan's past collaborations with his former DP John R. Leonetti (who may or may not have been too busy directing the Conjuring spin-off Annabelle to join Wan for this second go-round with the Warrens). The presentation successfully recreates that look which is slowly becoming iconic for the Warrens' universe: a blue-hewing, bleached-white world where even during the daylight there's a detectable darkness. The interior of the Hodgson home, with its cracked walls and its busy but fading wallpaper, somehow adding desolation and subtly contributes to the claustrophobic horror the family begins to experience. 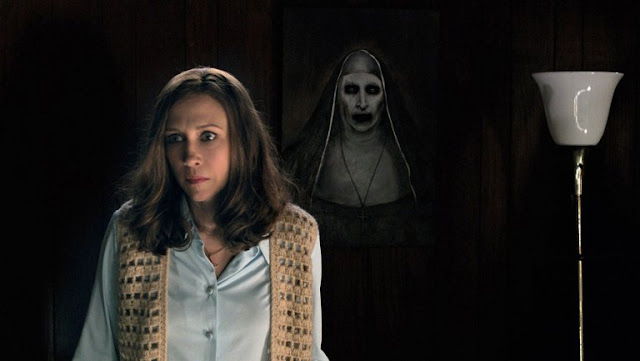 The Conjuring is among one of the scariest sounding films ever made, and The Conjuring 2 continues that trend. The film makes very effective use of the paranormal bumps in the night, and the requisite sounds of the genre are all accounted for: knocks on doors, thuds on floorboards, creepy child laughter...and the disembodied voice of the dead. As usual, the creepy score by Joseph Bishara (who has played the marquee demon in every James Wan film so far), complete with its whirling male choir, heightens the horror the characters are experiencing.

After the disappointment of Insidious 2, the most previous horror film from James Wan, the potential for capturing the class and effectiveness of The Conjuring didn't seem like a sure thing for its sequel. I'm happy to report that it's every bit as good as its original, and in some cases, even superior. Wan has sworn off horror films before (prior to making The Conjuring 2), and he's repeated that following its release, but here's hoping when it comes to the exploits of Ed and Lorraine Warren, he'll always make an exception. The Conjuring series prints money for Warner Bros., so more films will be made with or without him in the director's chair, but he and his screenwriters seemed to have cracked the code for making them so effectively horrific as well as realistic and emotionally involving.