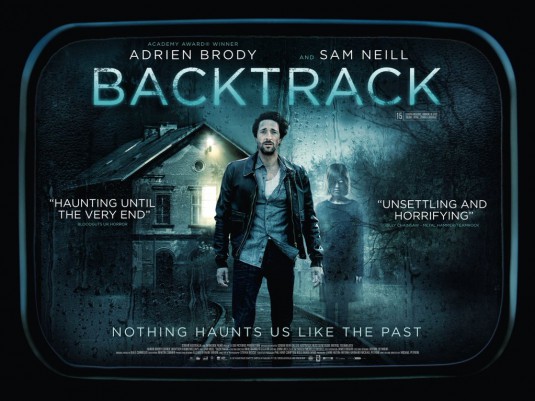 The ghost film is my weakness. It's one I will always go out of my way to watch, regardless of pedigree or budget, because I am endlessly fascinated by the supernatural. If I were a human being still capable of actually feeling fear, instead of having been dulled by a steady diet of horror films since I was in elementary school, you might say ghost films come the closest to providing me with a handful of reasonable scares. And that makes sense--that of the more metaphysical sub-genre, the ghost film rides the closest alongside the idea of life, most certainly death, and perhaps something beyond it. The concept of ghosts and haunted houses still pervade so much of our pop culture. Even the Travel Channel has built an audience of millions off their only popular program, "Ghost Adventures," the tie that binds ghost-hunting to traveling being that the hosts often get in a van and drive somewhere.

It's rare when a good ghost film is released. And unless James Wan is directing, chances are those good ghost films aren't at the multiplex, but rather somewhere hovering in the ether between VOD and direct-to-video. Much like any other genre, but especially horror, there's a reason why you've never heard of most titles found on page 37 of Netflix's streaming titles. So much bad horror is released in one calendar year that it's almost staggering. It's also sad, because so many of these so-called filmmakers aren't trying to make a film. They're assembling 90 minutes of forward momentum and spending most of their budgets on the Photoshopped cover that does its best to shield the fact that the film isn't even worth falling asleep to.

Somewhere between this Redbox fodder and James Wan resides filmmaker Michael Petroni's Backtrack, an Australian-produced supernatural mystery that offers up a handful of fine performances, an intriguing concept, and even a few well-timed and well-staged scares that actually border on frightening. Make no mistake that Backtrack is very aware of its influences, taking most of its DNA from The Sixth Sense, but it goes about it in the freshest way possible: that the patients of Brody's Peter Bower are actually ghosts isn't a twist that's saved for third-act reveal (obviously this factoid is included in the home video release's official synopsis anyway), but rather it's something discovered early on which kicks the main conflict into gear.

Brody, too, seems aware of the influence of Shyamalan's still-best film, as he likely realized he was also playing a sad psychologist a little too close to the dead. Brody, strapping on a serviceable Australian accent, is very calm, stoic, sad, and still in his performance, but not in a way that's boring to watch. He's supposed to be playing a man barely holding it together following the death of his daughter, for which he blames himself, and it's reflected in his every scene, during which he always seems moments away from bursting into tears.

The beloved Sam Neill makes scattershot appearances as Bower's own psychologist, looking pretty distinguished in a rounder face and full beard, though the motives of his character are unclear and never fully explained, leaving his presence in the film somewhat unsatisfactory.

Above all, writer/director Michael Petroni didn't want to make a horror film so much as  a film about life that just happened to contain elements more commonly found in genre films. He tried something similar with a previous film, Till Human Voices Wake Us, which could likely be used as a litmus test to determine if Backtrack is for you. Again, like The Sixth Sense, Backtrack vies to be something more than just a ghost film. It wants to be about life, regret, the significance of the past, and the pain of memories. It does all those things quite well, marrying it to a traditional mystery propelled by supernatural elements (and no lie, the use of "ghosts" in the film are definitely eerie), but what it results in feels a little too similar, however well made it may be.

Despite being a ghost movie, which, yes, does allow for a few jump scares here and there, Backtrack is actually kind of a quiet film. The dread and sadness dwell in the silent corners of every scene in which Bower appears, complemented by a melancholy score by composer Dan Cornelius. Backtrack is the kind of film whose strength comes from the quiet rather than screaming ghosts.

Backtrack is a horror film (kind of) for adults. What this means is that it's not interested in using ghosts to constantly scare the audience, but rather to make our lead character tap into his subconscious to determine why he is seeing them in the first place. Ghosts are used as a concept but not a catalyst. And, is Peter Bower seeing ghosts for real? Or ghosts from his past that won't let him rest until he confronts the memories he's long since buried? If you're looking for a straightforward haunt film, keep walking, but if you're up for something a little different and a little more mature, then give Backtrack a try.