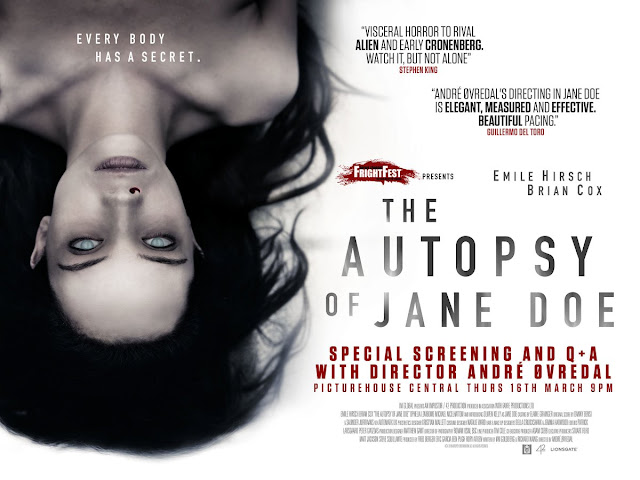 In the horror genre, there are generally two approaches that filmmakers opt to take: the gory gross-out, or the subtly creepy. Seldom do the two ever marry into a quality final product. The Friday the 13th series contains many entries that are lots of fun, for instance, but unless your fear threshold is comparable to a six-year-old’s, there’s nothing about them the least bit scary. And, likewise, some of the eeriest contributions to the genre were able to scare their audiences while shedding only a handful of blood, relying instead on mood, unsettling camera angles, or well-timed visuals.

In very few instances do visceral imagery and subtle scares come together with success. The Exorcist is probably the most notable exception, perhaps along with The Shining, although compared to today’s standards, a modern audience might not be as impressed with either. And this is what makes The Autopsy of Jane Doe, directed by Trollhunter’s André Øvredal, such a welcome and unlikely surprise. As scripted by Richard Naing and Ian B. Goldberg, the first act unfolds in near-real time as a father-and-son coroner team are delivered a body unearthed from below the floorboards at a local murder scene – one which needs a cause of death attributed as soon as possible. With the body of the young girl now on the coroners’ table, she is slowly dissected, the parts of her examined and tagged – all of which unfolds in a genuinely realistic manner. Indeed, nearly all of this first act unfolds with an almost scientific approach, even as the coroners begin discovering that there are certain “impossible” things about the body – its condition, its reaction to stimuli, and…well, lots more. And as you might imagine, as her body is slowly taken apart, it’s extremely graphic, but never in a way that feels exploitative or vapidly shocking. The film treats this act as respectfully as we would expect a real coroner to treat his or her real specimen, and as you watch the methodology and the men’s attention to their work, you forget you’re watching something intended as horror in lieu of something more fact-based and grounded. 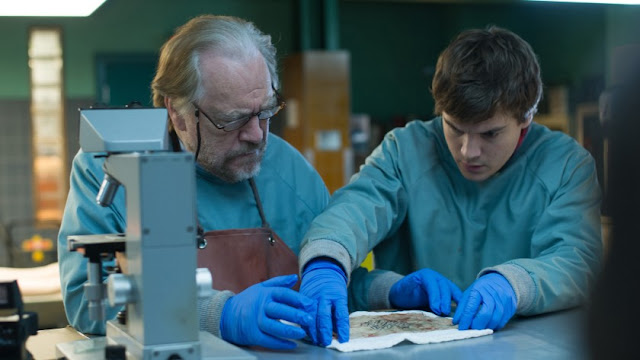 At the end of this act, while the mystery behind the anonymous girl’s body is being slowly put together, the graphic portion subsides, giving way to a more traditional, but no less effective or well done, series of ghostly encounters within the underground winding hallways of the Tilden family’s coroner office. Echoing the successful supernatural films of James Wan, The Autopsy of Jane Doe relies on old school techniques – and hardly any CGI – to craft a series of scares to unnerve the audience, and nearly all of them work. Glimpses of something unnatural through smoke, a mirror’s reflection, behind a crack in a door; unfortunate cases of mistaken identity – yes, they may be cliché, but when they work this well, I’m totally fine with it.

My favorite thing about The Autopsy of Jane Doe is its reliance entirely on history, mythology, and our own knowledge of both to tell its story. Thankfully (and I really doubt this is a spoiler), this isn’t a case of a girl’s spirit returning to warn the son that the father is the reason why she was found six feet under. There isn’t some lame last-minute twist that reveals either of them to be the killer, or crazy, or caught in hell, or some other overused twist that’s been done countless times before. What you see is what you get — there’s no twist coming to save the audience and relieve them from the terror that’s before them on the screen, to gently pat them on the head and say, “Don’t worry, this isn’t really happening.” It is. And, if you ask me, it’s about time that it did.

Brian Cox is a reassuring face in the genre, because – and I’ll go on record right now – he’s never been in a bad horror film. Likewise, he’s somehow managed to star in a handful of major or minor horror classics: The Ring, Trick ‘r Treat, Manhunter, voice work for the severely underrated and underseen zombie film Exit Humanity. No actor’s filmography is flawless of the occasional bad film, but it’s usually the horror genre which causes that actor’s downfall. With Cox, it manages to be the opposite. And The Autopsy of Jane Doe is no different. As usual, he’s excellent, unfazed by the disdain that many of his esteemed peers have for the genre. His younger counterpart, Emile Hirsch (making his horror debut), takes the same approach, and his somewhat picky reputation for the roles he takes additionally elevates The Autopsy of Jane Doe into something worthy of further adoration. This isn’t just some crap write-off for either actor, but something with compelling content that matches context pound for pound.

Odd as it may sound, but Øvredal designs the “dead” body of Jane Doe to look like a flawless work of art — white, unblemished skin; dark hair; and preternatural eyes. She — and the rest of the film — present as sterile and institutional but also inexplicably with an artistry seldom seen in the genre anymore. What colors there are seem bright and dynamic; during the first act, fluorescents are the only source of light, but the picture is bright and even somewhat inviting. However, as the events surrounding Jane Doe darken, so does the picture. 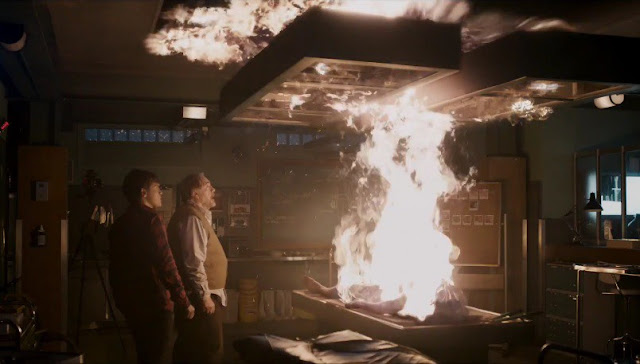 For much of the film, dialogue, only, is what drives the momentum forward — that and a handful of random soundtrack interludes, included repeated and increasingly creepy use of an old traditional folk song from the 1950s. But once the horror really kicks in, the musical score by Danny Bensi & Saunder Jurriaans kicks in along with it and really works in complementing the on-screen visuals that Øvredal concocts. The Autopsy of Jane Doe, like all great horror films, really makes full use of its audioscape, relying on both loud and sudden moments along with silence, or the faint sound of moving air, to unnerve.

It’s probably too early to label The Autopsy of Jane Doe as an “instant classic” as many critics seem eager to do, but it certainly deserves the same reputation as recent horror powerhouses like The Conjuring, It Follows, and Insidious, just to name a few. Horror fans are passionate people, which means they complain a lot — in a constant desire for original material, in something more than just tepid PG-13 scares. Well, here it is. Graphic and scary, and made by a handful of professionals determined to make not just an effective horror flick but an honest-to-gosh good film, The Autopsy of Jane Doe is the antithesis to the reboots, remakes, redoes, and repurposed content flooding multiplexes and streaming services everywhere. With enough graphic and ghostly content to please even the most practiced horror viewer, it’s an excellent addition to the genre that deserves far more title recognition than it might be receiving.