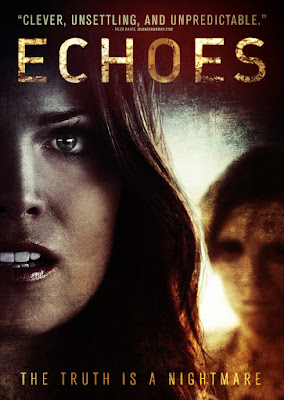 Anna (Kate French), a blogger who has been offered her first screenwriting assignment, is struggling to get a workable draft to her manager (and lover), Paul (Steven Brand), so Paul suggests they abscond to his house in the desert to give her a change of scenery and perhaps a bout of inspiration. There only a day, Paul announces that he has to leave to go deal with a client, and Anna suggests she stay behind, hoping that her isolation will force her to be productive. Without a car, and with Paul's dog, Shadow, her only company, Anna tries to do just that, but instead begins to suffer from increasingly worsening instances of the nightmares she's been having for a while now - that of an ash-faced figure with black eyes. With each new visitation from his demon figure, she is left with a new piece of the puzzle, so Anna begins to follow the trail of clues until she pieces together the mystery of her haunting - and what she discovers might have best been left undiscovered.

Echoes, simply put, doesn't really work - not as a ghost film, not as a mysticism film, and not as a murder mystery film. It really wants to be all three, but because of the time it has to share among those other sub-genres, all of them are left feeling unfinished and obligatory. What's suggested by the film's opener - someone haunted by sleep paralysis, a genuinely fascinating phenomenon - is abandoned nearly immediately after in favor of more waking-nightmare/possession nonsense that audiences have seen so many times before.

Speaking of things audiences have seen before, it would appear that writer/director Nils Timm has certainly seen The Conjuring, being that more than one visual trick is stolen from James Wan's surprise 2013 shocker. From flapping sheets revealing ghostly forms to black-eyed monsters possessing their victims, so much of Echoes has been done before and in far better ways that its title is actually perfectly ironic. 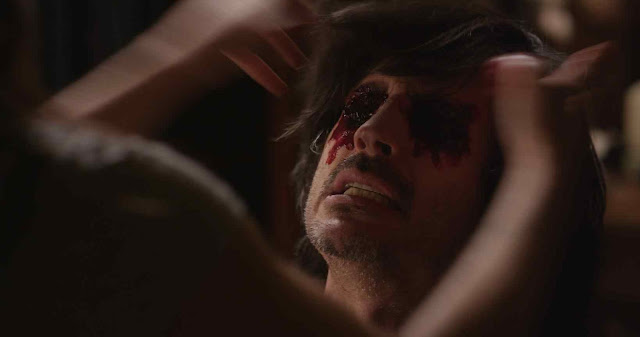 One of Kate French's eyebrows alone is sexier than any screenwriter I've ever seen, so her casting as such is dubious at best, and shameless at worst. As a lead she's merely competent, although the script doesn't demand she do much beyond look scared or take sad sit-down showers. Her constant appearances in tight tank tops or skintight exercise pants do more to show off why she was cast than anything having to do with her range as a performer. Alternately, Steven Brand offers up a nice performance as Paul. At first the audience isn't sure what to make of him, but he's likable and charming, and proves to offer the most defined character and solid performance in what is admittedly a small and intimate film with less than a handful of speaking parts.

Echoes brings nothing new to the table, but perhaps it will bring more attention to the phenomenon of sleep paralysis. Leafing through its Wiki entry is infinitely more intriguing and entertaining than anything that Echoes has to offer. Even the most die-hard aficionado won't feel the need to add Echoes to their collection. It's a bland and generic story that jumps from one overused trope to the next, none of which is as satisfying as what the summary promises. Sleep paralysis, also known as Old Hag Syndrome, is a strange ailment affecting an alarmingly high number of people, and has slowly become more and more common knowledge over the years - a shame that the film did away with the concept after an intriguing opening. Echoes is a rental at best.