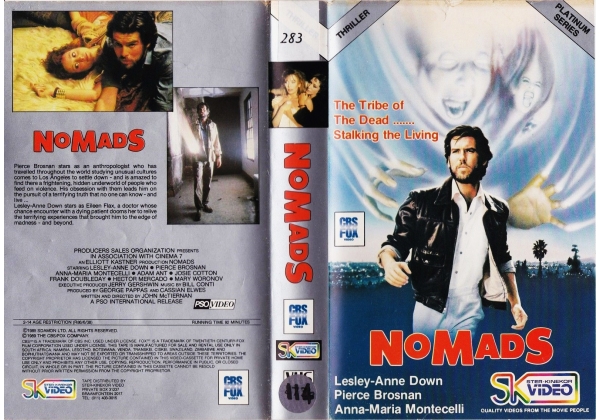 One of the most surprising things about this 1986 oddity is that it's the directorial debut of John McTiernan, who would go on to helm Die Hard and Predator -- films that aren't known for their subtlety. Nomads definitely is.

Nomads had always been (or at least seemed to be) considered one of those underrated horror films that threatened to become lost with time as the '80s became the '90s, and so forth. That it was included in Fangoria's 101 Best Horror Movies You've Never Seen, a valuable book that (mostly) gets it right, would seem to refute what had long been Nomad's unfair reputation.

Nomads is a strange, quirky film that seems to be attempting to copy what Ridley Scott did for Alien back in 1976: take a B-movie concept, put actual thought into its construction, and take everything 100% seriously. Obviously, McTiernan wasn't as successful as his ten-year-old tonal inspiration - at least not in the sense that it captured nearly the same amount of audience attention and adoration - but he did manage to take what on paper is a very silly concept and flesh it out with enough sincerity that it manages to overcome its shoddy story and achieve at least some semblance of cinematic worth. 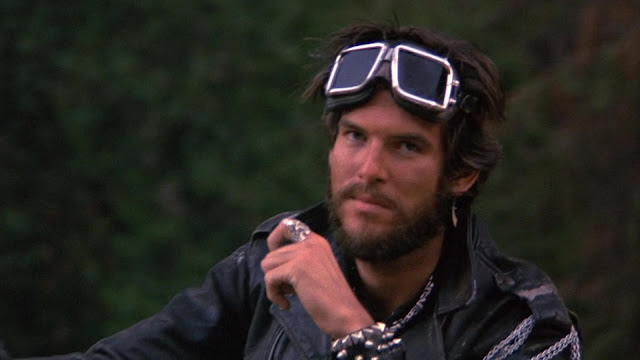 Echoing Nomads' sentiments of individuality are the performances by leads Pierce Brosnan and Lesley-Anne Down, who both do quite well in their roles. Brosnan doesn't exactly nail his French accent, but he puts every maniacal piece of energy he can harness into his role of the tortured Pommier. Down, too, does solid work, though her performance by design is a bit more restrained, even as she spirals further down into Pommier's twisted memory bank.

Nomads depends very much on imagery, tone, and a strange, almost ethereal and dreamlike mood that at times transcends the hokey story (of Nomadic spirits embodying, currently, biker gangs in Los Angeles), and every credit goes to McTiernan for achieving this. Even with his film debut, and though he would go onto projects based more on visceral thrills than weighty stories (Nomads remains McTiernan's sole [credited] written effort), he proved right off the bat that he was a filmmaker with specific ideas and an uncanny ability to exude a story rather than tell one. If any genre has proved that it can skirt by on mood and themes rather than a tangible story, it's horror for sure - example: Dario Argento's most celebrated body of work - and Nomads, in that regard, is a success. 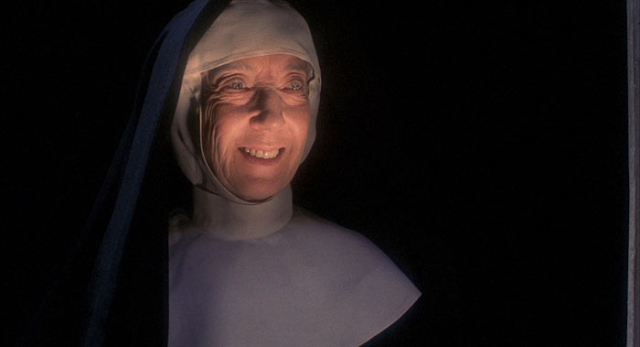 One of Nomads’ secret weapons is the musical score. Composer Bill Conti is likely most well-known for having created what's become iconic music for the Rocky series, and like every great artist who achieves a certain level of fame and prestige, there's always at least one other work hovering somewhere in the obscurity of that artist's career, and for Conti, it's likely his work for Nomads. Very evocative of his 80s contemporaries Tangerine Dream and Vangelis, Nomads' score is alternately melancholy, sweet, brooding, and even a little magical. It fits the tone of the film overall.

Nomads hovers somewhere in No Man's Land between "films not for everyone" and "films for no one." To describe the film as poorly made or incompetent would be a falsity, as from a directing standpoint alone Nomads can be quite strong. Where viewers will be turned off is in its very abstract form of storytelling and its very esoteric concept. To say the plot out loud - a woman uses the shared thoughts of a perfect stranger to investigate a group of undead nomad spirits currently living as a big-haired biker gang in modern L.A. - is to make it sound absurd, and maybe it is. But at the same time it's such an intriguing idea that whether or not it entertains most audiences, or even some of them, it deserves points for that alone.

Oh, and speaking of Die Hard: