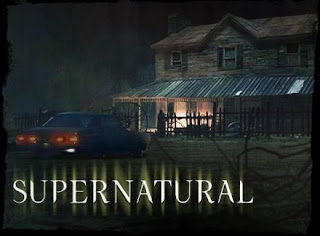 Deplorable seventh season aside, “Supernatural” will always be one of my favorite shows.  Perhaps unable to fully achieve its proper due thanks to its affiliation with the CW, it’s a show that pushes the boundaries of what network television can get away with—but never think the inclusion of spurting blood and flying limbs equates to a lack of proper story telling or development. It doesn’t. In turns of organically growing an ongoing saga, the first five seasons of “Supernatural” tell one story, as it was meant to. It has a beginning, a middle, an end…and unfortunately a completely depressing epilogue, which lets us know the show ain’t as dead as we thought (and hoped). A show that was meant to end after its fifth season is currently airing its eighth. Sadly, and in spite of all the many in-front-of and behind-the-scenes people saying they preferred to see “Supernatural” end before it suffered from “The X-Files” syndrome (overstaying its welcome), unfortunately its revolving door cast of show runners believe otherwise.

For a show that delves into things that go bump, it was only natural that they tackle Halloween from time to time. Two episodes in particular help to scratch that Halloween itch with quick and breezy viewings. 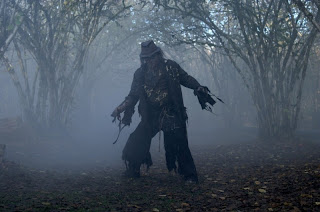 Right off the bat I should state this isn’t a Halloween episode per se. There are no trick-or-treaters, no pumpkins, and it doesn’t even take place in October. But what it does include is a small town of folks making offerings to the pagan god of harvest named Vanis, who possesses the scarecrow in the local orchard and comes alive once a year to take the lives of any unfortunate and hapless couple that have unknowingly been sent to their deaths. The town’s reward for these offerings is one full year of good crops and good luck. If that’s not appropriate for Halloween, I don't know what is.

Set in the fictional town of Burkitsville, Indiana (perhaps a nod to The Blair Witch Project), it would seem a small collection of people – including the local sheriff – have been doing this for years, and good fortune has been their reward for being loyal, god-fearing worshippers.

The first season of “Supernatural” is centered around the brothers Winchester (Sam, played by Jared Padalecki and Dean, played by Jensen Ackles) attempting to locate their missing father, all the while investigating murders across the country that reek of their specialized kind of work. A cryptic phone call placed by father John to Sam orders the brothers off to Burkitsville to investigate the semi-regularly disappearances of couples. This pisses Sam off, as he feels that John is once again giving them orders but not letting them in on the big picture. For those unfamiliar with “Supernatural,” this is a heavy and reoccurring theme during the first season. As a warning, first time viewers who want to give this episode a watch upon my recommendation (all of “Supernatural” is currently on Netflix Instant), should know that they’ll have to wade through a bit of backbone mythology to get to the otherwise standalone adventure the brothers find themselves in.

Although there's a cameo appearance by “The X-Files'” Cigarette Smoking Man, so there's that!

“Scarecrow” is directed by Kim Manners, a longtime director for both “The X-Files” and “Supernatural,” who unfortunately passed away during the latter show’s fourth season. Manners has consistently proven to be one of the best directors for both series, and “Scarecrow” is infused with a healthy amount of creepy but subtle scares. Scarecrows are inherently creepy based on both their association to Halloween and their general creepy appearance. The scarecrow featured here is especially creepy, and proves a worthy foe to Sam and Dean.

After going back in time to watch this episode specifically and falling out of the current loop, it was easy to forget just how much of the episode is dedicated to moving that season’s overall arc forward – nearly half the episode focuses on the scarecrow story while the other half focuses on Winchester drama. I could see this being a deterrent for folks not terribly interested in “Supernatural” in general as much as they’re looking for a fun, gory, 40-minute romp. But give it a chance anyway, nerds. What have you got to lose? 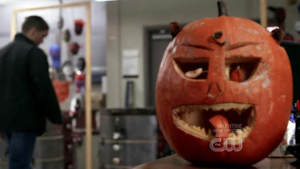 Now this is why we’re here. This episode of “Supernatural” is in full-on Halloween mode, and there’s a general helping of all things creepy and undead – zombies, ghosts, witches, demons – to enjoy. In addition to that we’ve got a dude ingesting razor-blade-infested candy, a fatal game of bobbing for apples, and a really hot cheerleader. What’s not to love?

That aforementioned razor blade death brings Sam and Dean to town to investigate. A hex bag is located in the dead man’s home, but it’s not just your usual bag of tricks – some of the items inside are several hundred years old and can’t be found at your local new age store. Witchcraft isn’t something the boys haven’t investigated before, but those cases in the past dealt with a plain mortal out for revenge. This case, however, seems to have a purpose, and Sam realizes that in conjunction with the legends of Halloween, someone out there is looking to offer "three blood sacrifices over three days, the last before midnight on the final day of the final harvest." It would seem that someone is trying to resurrect the god Samhain, who possesses the ability to raise all manner of ungodly things from Hell to destroy the living.

Naturally, the brothers must stop it.

Like the previously recommended, a bit of season 4 mythology is married to this episode, and while it’s a little more fantastic (we’re dealing with angels at this point), it dedicates less time to the mythos and more to the Halloween murders. So, again, to first-time viewers here only for some Halloween jollies, you’ll have to deal with a bit of on-going season 4 backbone story, but it’s not all that intrusive.

“It’s The Great Pumpkin, Sam Winchester” is nice and bloody, and the show’s use of humor is ever-present here. By now both actors have really grown into their roles – Padalecki has left behind his pretty boy look from the earlier seasons and is on his way to becoming gigantic, and Ackles allows a bit more darkness and anger into his iteration of Dean. And the episode itself is just a fun time. Ignore all the angels and demons mythology if you so wish, because those who are interested in the Celtic beginnings of Halloween should find the episode a satisfying watch.