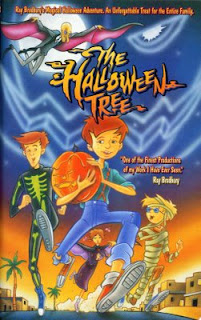 I tried to make my recommended viewings a little less typical, but I couldn’t help but include 1993’s animated take on the Ray Bradbury novel of the same name. It just wouldn’t feel right leaving this one in the dust, considering that it’s so widely beloved by so many people in so many age groups, yet here we are in the dying DVD age and the damned thing still doesn’t have a proper DVD release. (I mentioned in an earlier post that it is available via the Warner Bros. Archive Collection on DVD-r only, which I guess is good enough. For now.)

As much as I enjoyed his novel The Halloween Tree, it wasn’t until seeing the animated movie of the same name that I fell in love with the story. I wish I could be one of those people who say “I’ve been watching that movie ever since I was kid, ” but sadly I can’t. I’m also that person who never saw It’s the Great Pumpkin, Charlie Brown until many years out of my youth.

Fortunately, my lack of exposure to The Halloween Tree in my youth did not prevent me from loving it. It’s become yearly and required viewing for me, and since discovering it I’ve been depending on a crappy VHS rip burned to an undependable DVD. Thankfully, the recent Warner Bros. Archive edition offers a very good looking and sounding presentation. (Also, would it be wrong of me to tell you the entire movie can be watched on Youtube?)

As clichéd as it’s become to say, the whole family really can sit down and enjoy this production. Yes, it’s animated, but don’t let that scare you, cooler, older adult man/woman. It may be animated, but like Pixar’s filmography have proved, it doesn’t mean weighty themes about life and death, friendship and sacrifice, can’t be present, shared, and appreciated. 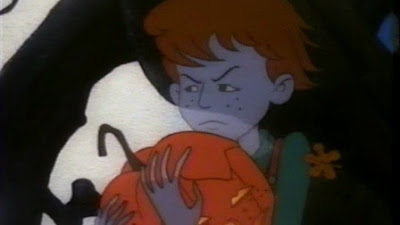 Ray Bradbury provided the teleplay adaptation of his novel (which earned him an Emmy award) and also provides the narration for his tale about a group of kids all set for a night of Halloween night trick-or-treating until they see one of their friends, Pip, being taken from his home in an ambulance. The kids are distraught, unaware of what to do or how to think…until they spot Pip somehow tearing ass through the woods. The friends follow after him and come across a dilapidated old mansion where they meet the very mysterious Mr. Carapace Clavicle Moundshroud (voiced by Leonard Nimoy) and see his very tall and very unusual Halloween tree – made of dozens of glowing jack-o-lanterns. They see Pip go AWOL with a pumpkin from the tree, and Moundshroud demands that it be returned, being that it now “belongs” to him.  A chase ensues, not across the town but through time itself – from the pyramids of ancient Egypt to the cathedrals of Notre Dame – each providing a bit of history on Halloween’s beginnings.

The Halloween Tree sees little change from its novel form to its teleplay. The number of kids shortens to four (one of them becoming a girl), and some of Bradbury’s more flowery and abstract descriptions are toned down to be a little more accessible, but the spirit of the story remains firmly in place.

Nimoy does a good job with voicing Moundshroud, though it’s peculiar he would choose to utilize such a strange, almost bird-like screeching voice instead of relying on the deeper, baritone voice for which he is well known. Still, odd choice aside, his voice acting is effective, as are the kids’.

Famed studio Hanna-Barbera provided the animation, and while it’s a reflection of the time it was made, it’s still certainly more than satisfactory. 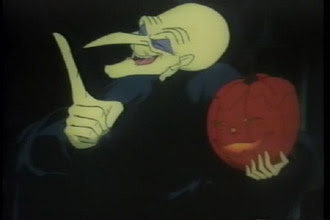 Regardless of when you discovered this movie – whether in your youth or your adulthood – it contains the power to enthrall and fill you with that certain kind of nostalgia that only usually happens by accident. But The Halloween Tree works in this regard like gangbusters. It will fill you with the kind of melancholy that only occurs when revisiting your childhood, but you’ll also laugh and maybe tear up as you watch these kids tumble through different lands and time periods, all in hopes of saving their friend. By the end, you’ll be wishing your friends were as loyal and devoted as Jenny the Witch, Ralph the Mummy, Wally the Monster, and Tom Skelton the you-know-what.