DAY 11: YOU ARE THE MANIAC! — THE ULTIMATE HALLOWEEN PARTY CARD GAME 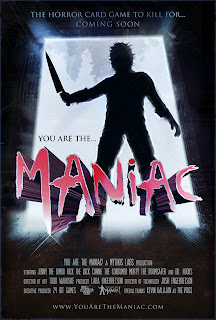 Now this is cool.

Remember that scene in Friday the 13th: Jason Lives, when Sissy begins laying out the rules for a card game called Camp Blood? As she begins to describe (vaguely) the rules of the game in order to determine "which cabin Jason is in," the scene cuts away and the audience never hears the rest of the rules.

How many horror movie obsessers would have adopted such a game into their usual repertoire of things to do when friends come over, beer caps are popped, and everyone is around the table?

That's where Camp Blood is no longer necessary. Because now there's You Are the Maniac.

YOU are the Maniac! is a horror movie themed card game where you play as The Maniac. Gameplay is fast-paced with a surprising mix of strategy and dark humor. Slash your way through a horror film trilogy with 2 - 4 players, complete with a familiar cast of slasher movie stereotypes we hold dear to our bloodthirsty hearts.

A game consists of 3 movies. During each movie, 13 Victims, including 1 Final Girl, are lined up on The Wall. Players take turns playing Maniac Cards and capturing Victims. After the third movie, players tally up the body count. The Maniac with the most points wins!
YOU are the Maniac! is played with 4 game decks, featuring 120 unique cards

The Maniac deck is where the game’s horrific scenes unfold. It also contains Instant Play cards which equip weapons and conceal your hideous deformities.

The Plot Twist Deck contains cards that alter the direction of the movie, in unexpected ways.

Saved for last, the Final Girl must confront The Maniac at the end of each round. 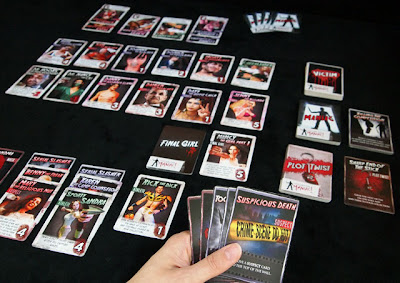 From a design point of view, You Are the Maniac is the tops. The artwork utilized on each card is beautiful, and those of us with an observant eye will see the classic Friday the 13th font utilized to full effect here. Additionally, the Final Girl cards are nice homages to Sidney from Scream and Nancy from A Nightmare on Elm Street. (No Laurie, though?)

Further, the Victim Cards also contain a bevy of homages to other films. Special attention must be called out to the psychiatrist Dr. Hooks, who is very clearly based on Dr. Loomis, right down to the tan trench coat collar peeking up from the bottom of the card. And I laughed at "Pete the Wonder Llama" - probably the first purposeful reference to Jason Goes to Hell I've ever seen. I selfishly wish each card could have been an exact character from a famous franchise, but obviously care was taken to ensure that trademarks were not infringed upon.

When it comes to game play, and once you master the directions and can play without them, this game is a real hoot. Think of it as a very very expanded version of the classic card game "war" where the high card takes the win, mixed with the interactive play of Monopoly. The idea is to possess all the Victim Cards to win, but hurdles will be thrown your way during game play, thanks to the various Plot Twist cards players must endure from time to time.

Because I am working with a preview deck here, and the game is still being fine tuned, my only real point of contention would be with the actual directions. I'm not the brightest bulb in the class for idiots, but it took me several read-throughs of the directions before we could even start the game, and even then I was still a little confused. (How is it the very first step in the game is optional?)

But who knows - could've been just me, folks. I'm usually the guy pushing on the door that says "pull."

Mythos Labs began a Kickstarter fundraiser to help bring this game to fruition, and as I write this, they are insanely close to their goal.

Check out the campaign for yourself, see more pictures of game play, and get more info. If this is something you'd love to play with your friends one Halloween night (it really is a perfect party game), then show some love and support. This was a game made, literally, for you. 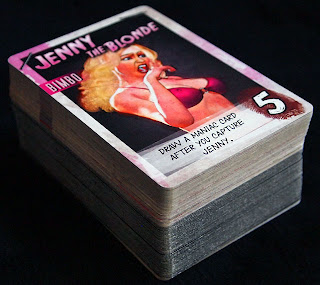 Email ThisBlogThis!Share to TwitterShare to FacebookShare to Pinterest
Labels: 31 days of halloween 2012