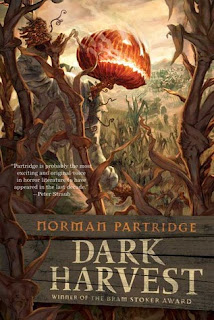 Synopsis:
Halloween, 1963. They call him the October Boy, or Ol’ Hacksaw Face, or Sawtooth Jack. Whatever the name, everybody in this small Midwestern town knows who he is. How he rises from the cornfields every Halloween, a butcher knife in his hand, and makes his way toward town, where gangs of teenage boys eagerly await their chance to confront the legendary nightmare. Both the hunter and the hunted, the October Boy is the prize in an annual rite of life and death.

Pete McCormick knows that killing the October Boy is his one chance to escape a dead-end future in this one-horse town. He’s willing to risk everything, including his life, to be a winner for once. But before the night is over, Pete will look into the saw-toothed face of horror—and discover the terrifying true secret of the October Boy…

Dark Harvest, by Norman Partridge, is deceiving at first. The actual book itself is thin, numbering 170 pages, and at first glance appears to be a children’s novel. Not helping is the quite large typesetting and a line spacing that could be described as generous. I have nothing against material for younger readers, mind you – I still, after all, revisit those infamous Scary Stories books from time to time – it’s just that I was expecting something, on the surface, a bit more adult.

Well…I almost literally judged a book by its cover.

True, Dark Harvest may be a quick and breezy read, but in this case, there is no mistaking quality over quantity. What appears to be a book aimed towards younger readers is actually a novella in a novel’s clothing. And there are definitely themes at play here that are for adult eyes only: alcoholism, anger, sacrifice, abuse, bloodshed, cult worship, child death, and full-on murder.

I really hate to use this analogy, considering Dark Harvest was released a full two years prior to Suzanne Collins' juggernaut, but it very much is The Hunger Games meets Halloween – only Partridge is clever enough to tie the hunger inflicted upon these kids to the myths and traditions of Halloween itself. You see, young Pete and many of the nameless town’s kids have been locked inside their rooms for the five days leading up to Halloween and given nothing to eat. And then when October 31st finally comes calling, the kids are released into the night to hunt down the October Boy…an unnatural and resurrected figure brought to life by dark magic…and who is literally filled with candy, courtesy of the mysterious figure responsible for bringing him to life. It’s just an extra little incentive for the winner, but one that heightens the viciousness of the kids involved in the hunt. It truly is trick-or-treat at its most twisted and dangerous.

While the majority of your characters are kids, there is nothing lighthearted or even morbidly funny about what’s going down on Halloween night. These kids aren’t out for a gas – they have a very dangerous goal, and it’s literally winner-take-all. Kids drop, one by one, as bloody messes. They are cut in half by sawed-off shotguns or nearly run down by speeding trucks. And the few adults who should care about the well being of their town’s children – especially Officer Ricks, a representative of the law and member of the mysterious Harvester's Guild – don’t. All they care about is making sure one of the kids is successful in dropping the October Boy, so that the following year will be prosperous for their small town.

Dark Harvest is exactly that: dark. It’s not afraid to get its hands dirty, and it’s not afraid to depict children as the murderous and dangerous beings we like to pretend they aren’t capable of being. Despite their young ages, they have very adult mindsets about their goal. And they’re not afraid to knock each other off in the process. As for our lead character, Pete McCormick, he wants to do what everyone else is trying to do: knock off the October Boy and reap the benefits. But he doesn’t want the luxury car and the big house and all the money and riches that allegedly come with such a prize. He wants to kill the October Boy and use it as a one-way ticket out of his town, where his mother has died, his father has become a drunk, and he’s been left all alone to care for his little sister. All he wants is to leave everything behind and start a new life.

Dark Harvest is at times very conversational, and at others maddeningly bleak and heart-achingly poetic. Partridge is an absolute master at personifying and literalizing regret, through either action or description. Recollections of one character, Dan Shepard, are extremely powerful as he looks back on his life and realizes there's not much about it he doesn't wish he could rescind:


Just because he can't put a name to the furrows life carved in his hands doesn't mean he can't see where those ditches run. He knows well enough where they run. He even knows how those ditches were dug. Hell, sometimes he can almost see the shovels working. And tonight he hears those kids screaming in the streets, and he remembers what it was like to be sixteen… or seventeen… or eighteen, and run in their number. When he could believe the things that people told him, and he could chase after a dream until his heart pounded like it was ready to batter its way through his rib cage and take off on its own.

And that's the way it was back then. For Dan and for all the guys he knew. You remember how it was, because you weren't really any different. You could believe the things that people told you, too. Their words were gospel, and you trusted them. You believed because you were sixteen… or seventeen… or eighteen. You believed because your dreams had started running up against the Line like it was a brick wall that didn't have a single crack. And you believed - most of all - because you had to. You needed to believe that someone could get out of this town, same way you needed to believe that that someone just might be you.

You found a job. You filled up your days. And you filled up your nights, too. On one of them you found yourself with a girl who made you feel a little bit better about the way things were, and pretty soon you found yourself with that girl most every night. And a ring went on her finger, and the two of you carried around a couple of keys that matched the same front door, and at night you both found your way through it and closed that door behind you and, together, you waited for the morning to come.

(A moment of honesty: That last paragraph brought me to tears when I read it.)

Further, there are no sunny characters present here. Each person we meet is a tragic one. Each looks back on their life and sees nothing but darkness and sadness, and those that don't can barely be considered human. Even Pete, with whom we are meant to sympathize (and we do), doesn't see much hope for himself beyond successfully bringing down the October Boy. It's his only way out. It's his only way to escape the nothingness that has encapsulated his life.

Patridge uses Dark Harvest to honor Halloween, and to great effect. It recognizes that its roots are strange and often sanitized by Walmart ghost windsocks and grinning skeletons that are having just a blast being dead. And it certainly does a great job using Halloween as a backdrop for a more unsettling and scary realization: that once kids become old enough, they will set out to carve their own place in the world – that the turn-out of the world as we know it is up to them. Some parents will try to guide them as best as they can, and others will be ghosts and non-presences. And even those individuals that kids are raised to trust and respect won’t just be disappointing and disillusioning, but downright dangerous. This extends to every facet of life, from teachers, police officers, upper management, and even the president. Above all, the book preaches: If you make the right choices, you will be rewarded. If you let your desire for fame and fortune guide you, then you are doomed.

And it’s as simple as that.

Having read Dark Harvest a second time for this write-up, I've come to realize it's one of my favorite books. Halloween is the hook to draw you in, but the meat of the story is regret. We've all done something in our past that fills us with nothing but regret – it's probably the only thing we have in common as human beings – and Dark Harvest harnesses the power to effortlessly draw that regret out and make you see it could just as easily be you making the Run, trying to cross the Line, and dreaming of a better life after taking out the October Boy.
Posted by TEOS at 12:30 AM