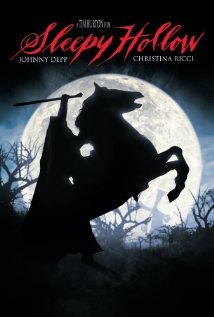 When a character dramatically rolls his eyes at Ichabod Crane’s emphasis on adhering to facts over superstitions in regards to solving a case and says, “This is the only book you’ll need,” and drops a gigantic bible on the table, you'll know you’re not exactly seeing a subtle take on the classic Washington Irving tale, The Legend of Sleepy Hollow. But then again, Tim Burton has never made subtlety a part of his repertoire.

Right off the bat I should say that I do not think the filmmaker’s 1999 adaptation of the tale is a great film. For me it hovers somewhere around good. Screenwriter Andrew Kevin Walker gets points for taking a fairly simplistic story – which spends more time describing the sights, sounds, and foliage of Tarrytown, New York, rather than trying to creep anyone out – and turning it into something layered and intelligent…almost too much. It’s so far removed from the original source that the only things they eventually have in common are the names of characters and the love triangle between Ichabod, Catrina, and Brom Bones (the best name in literary history). 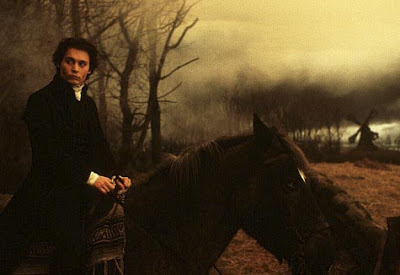 Johnny Depp actually makes for a great Ichabod, a character described as gangly, almost sickly looking, and awkward. He ups the handsome factor a little bit, but this is Hollywood, folks, where pretty people reign supreme. The chemistry between he and the eerily unaging Christina Ricci is serviceable enough, and the actual iteration of the Headless Horsemen is perfectly intimidating. Not to mention the score by Danny Elfman, one of the best as far as the duo's collaborations go.

Visually, Sleepy Hollow is Burton’s best film as a director. For a classic tale long associated with our favorite holiday, Burton crams in all the dead leaves and twisted trees that you can stand. And if that’s not enough for you, how does witchcraft sound? And fields of corn? Ghastly jack-o-lanterns? Scarecrows? The movie comes as close to achieving the look and feel of Halloween without actually being about the damned holiday.

Although maybe it is?

Halloween has traditionally always contained all of those earlier stated iconography: witchcraft, jack-o-lanterns, scarecrows, dead leaves, cold winds, things that go bump, and beautiful autumn. This one straddles the line between ya or nay, but it's a film that I love to revisit every year around this time, so I will certainly allow it.

When I think of Halloween, I think of small towns in rural areas. I think of farms and cabins and isolated areas. I think of the past, with its antiquated celebrations in the town square complete with wooden masks and jolly fiddle music. For me, Sleepy Hollow – overly complicated plot or no – captures that.

Plus it’s got pumpkins! 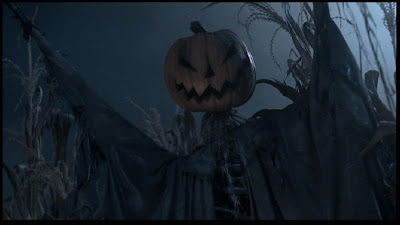