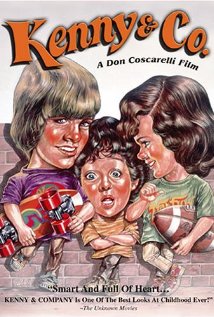 When it comes to Halloween, you should know that it’s not just about the scare. While that’s a huge part of it, Halloween – like many other holidays in life – changes meaning the older you get. So when you are a child, Halloween is obviously married to the idea of childhood. Your Halloweens past were not about the costumes you wore (I myself could probably only name three without the aid of old photos), but about the kids you went trick-or-treating with. It’s about your friends, and the random memories you created that night as you walked your neighborhood streets. It’s about the misadventures you got into, and the trouble you avoided (or nearly did).

It’s reasons like this that Halloween is the purest holiday we have, because under its gothic décor, it stresses community, bonds, and friendships. And though these things may snuff out after a while, they’ll never be forgotten.

Don Coscarelli’s sophmore effort, Kenny & Company, is about these very same things. The director, most famously known for the Phantasm Series, as well as Bubba Ho-Tep and his newest, John Dies At the End, once again writes, produces, and directs this slice-of-life nostalgia piece about a small, nameless community in the Southern California suburbs. Our main character is Kenny (Dan McCann), a precocious kid experiencing all the same things we did as kids: bullies, crushes, life lesson, etc. Luckily he has his best friend, Doug (Michael Baldwin), to get him through it.

Kenny & Company takes place in the few days leading up to Halloween, and with it comes costume planning for the big night. But that’s not the only thing they’re up to. They’re constantly getting into mischief, usually on their own, but sometimes along with Doug’s dad, Big Doug, who has definitely bequeathed his more playful side to his son. All during the boys' misadventures, Kenny provides narration, sometimes in that “Wonder Years” type way where it sounds like reflection, but other times in a happening-in-the-moment way.

To summarize Kenny & Company is somewhat difficult, because the film doesn’t really have a plot—and that’s not a knock against it. Not at all. Kenny & Company plays less like a traditional movie that contains an inherent conflict, but it’s more about a snapshot consisting of 3-4 days between two friends. They get in random adventures where consequences would definitely present themselves and serve as some kind of catalyst for conflict, but then nothing happens. The film at times often feels like a collection of short vignettes. For instance: kids build a soapbox racer, kids test drive soapbox racer down steep hill, kids nearly die, kids throw soapbox racer off an overpass and never mention soapbox racing again. Fin. There are numerous examples like this which occur throughout. 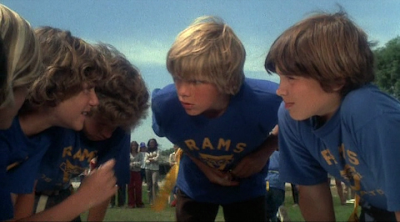 The first time I watched Kenny & Company was due to nothing but curiosity. At that point I had seen nearly every one of Coscarelli’s films (except for The Beastmaster, which I believe he’s since disowned, as well as the ever-elusive Jim, the World’s Greatest). I was intrigued to see what an early effort from Coscarelli – a family comedy, no less – looked like. I expected to laugh once or twice and appreciate the film in a time capsule sort of way, but nothing beyond that. I was quite honestly surprised to see that while the film isn’t consistently laugh-out-loud funny, it’s most assuredly a good time.

The biggest selling point of Kenny & Company is that it's definitely a product of its time. The 1970s are known for having produced an onslaught of dark and bleak movies, and that goes for every genre. Most people point to the futileness the country was feeling in response to the Watergate scandal, and the needless and unending Vietnam War. And this dark mood extends to Kenny & Company as well. Not to say that the film is dark, but when compared to your typical kids’ films, it tackles a lot of serious themes—including death.  After all, Kenny’s dog, Bob, is slowly dying, and the family has no choice but to put him to sleep. This is Kenny’s first (but not last) exposure to death in the film, and it affects him in a big way. A lot of people believe that the best way to teach your children about death is to get them a pet while they’re young, so they can experience growing up with this companion by their side and witness the aging (and dying) process firsthand. This idea is provided and utilized to maximum effect. There’s an especially well-blocked and uninterrupted shot where the family takes their dog into the veterinarian’s office to put Bob to sleep, and the camera slowly pans around the entire waiting room as you see many other people holding their aged pets and looking sad, and as we, the audience, figure out that they’re all there for the same reason, we end up back on the closed vet’s door again and the family leaves, their eyes wide in shock, tears streaming down Kenny’s face. This kind of thought and dedication to serious themes are nearly absent from family films today. Instead, Bob the dog would be voiced by George Lopez and make joke after joke about enchiladas or bad Mexican water.

What also makes the film work is that the kids act, talk, and think like kids. They aren't unrealistically intelligent or perceptive, but they're not stupid, either. They're just kids, presented the way that kids should be. They like trouble, so they find ways to get into it. They make fun of each other, hit each other, and pull pranks on each other. And it all works to the intended comedic effect because it feels very real.

As a director, you can see Coscarelli finding his voice, and so the film contains that awkwardness prevalent in budding filmmakers. Some scenes could certainly have used some tightening, as they go on for too long and become a little awkward. But you also see the genesis of what’s to come in the first Phantasm, including shots of the kids riding their bikes down the street as the camera trails just in front of them. Also, the score by Fred Myrow alternates between generic '70s synthy cheeseball filler to genuine, nearly dreamlike music. Scenes that could have been played for laughs come off differently with this music, especially in the third act where Kenny faces off against his bully inside an old, eccentric woman’s house. The music is downright menacing, and it changes the tone of this scene drastically. 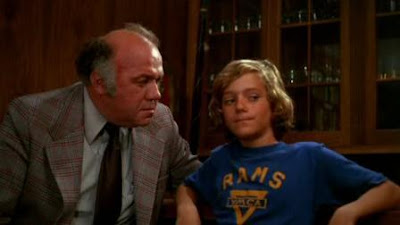 Kenny & Company is also a little less PC, both in front of the cameras and behind. Our characters constantly cuss, and they even teach the foreign kid to say “asshole,” who does so with extreme glee in his eyes. But behind the cameras, Coscarelli allowed his kid actors to do most of their “stunts.” Doug, especially, tucks, rolls, tumbles, crashes, and does almost every other manner of bodily harm to himself. I can’t explain why, exactly, but this adds to the movie’s charm.  Maybe it’s because kid actors during the '70s weren’t coddled and handled like newborn chicks as they are today, and this adds a slight edge.

Several Phantasm folks are present, including the aforementioned Michael Baldwin as Doug; Reggie Bannister as Kenny’s favorite teacher, Mr. Donovan; Ken Jones as the boys’ football coach (who would go on to play the caretaker who attempts to capture Mike Pearson in the Tall Man’s mausoleum and gets a sphere drill to the noggin for his troubles); and Terri Kalbus, who plays Kenny’s crush (as well as the fortune teller’s granddaughter). Much of the behind-the-scenes crew, including Coscarelli’s parents, and his producing partner, Paul Pepperman, would also carry over.

And yes, the reason while we’re all here: the sequence in which the kids put on their Halloween costumes and go trick-or-treating is certainly fun. It leads them to a house where its occupants have turned their own garage into a house of horrors (and also concludes a mystery that’s established in the second act). It is during this sequence where the kids are pursued by a costumed man in the dark that inspired Coscarelli to go on to write and direct Phantasm, citing his extreme lack of enjoyment in watching his audience become fearful of the events occurring in that haunted garage. 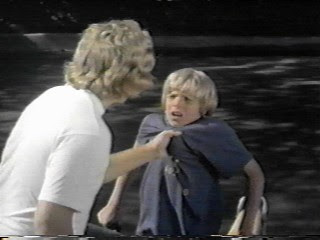 Is Kenny & Company a Halloween film? Not really—at least not in the traditional sense. But it does take place in the week leading up to it, it is very funny at times, and it certainly nails that nostalgic look back at childhood, of which Halloween was a very big part. It wouldn’t be the first film you would think to watch as we approach that late October day, but to do so wouldn’t be unheard of.