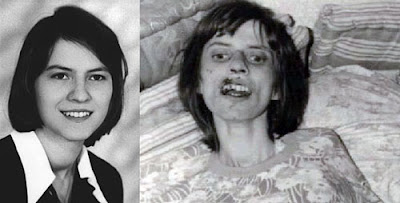 Anneliese Michel complained of seeing disturbing visions while saying her prayers. Later, evil voices giving her commands followed. Finally, Anneliese began showing an aversion to religious iconography. An older woman, a friend of the Michel family, noticed this while on a pilgrimage with Anneliese. She said that Anneliese smelled “hellishly bad” and took her to see some priests. Many of them said Anneliese needed a doctor. However, one eventually said Anneliese needed an exorcism and an exorcism was eventually granted.

In 1975, Anneliese Michel and her parents stopped seeking medical advice and gave over Anneliese’s fate to the Roman exorcism ritual ... Anneliese herself said that Judas, Nero, Hitler, Cain, Lucifer and others were inside of her. Over the next ten months, Father Arnold Renz and Pastor Ernst Alt performed 67 exorcisms for the tormented girl.

There are claims that Anneliese spoke several different languages (or the demons and evil souls that possessed her did) during the exorcisms ... She allegedly urinated and defecated on the floor frequently, also licking up her own urine. She ate insects, growled at religious icons and sat under her kitchen table barking for two days.

Anneliese Michel died of dehydration and malnutrition on July 1, 1976. The 23-year-old woman weighed 68 pounds at the time of her death ... Forty-two of the exorcisms were audio-recorded...