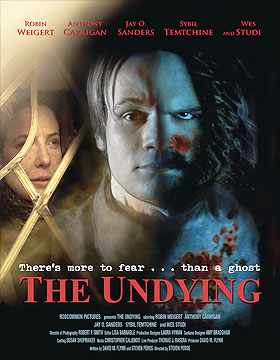 The Undying is the greatest concept for a Tropic Thunder/Grindhouse fake trailer there ever was. The only problem, however, is that it's not a joke, but a real, honest-to-Gosh movie. With a story so confoundedly ludicrous, and acting so questionable, it truly feels that the movie should have actually been a parody sketch instead of 100 minutes of poorly conceived fodder marketed towards repressed housewives.

SHE'S a widow, desperate to put her life back together after the accidental death of her husband.

HE'S the displaced spirit of a long dead Civil War soldier who happens to reside in her new home.

Together, they will overcome centuries of separation, the pain of heartbreak and loss, and at-odds racial faux pas.


Henry tells Barbara of the alleged ghost that is said to haunt the old house—a confederate Civil War soldier named Elijah who was gunned down by two Yankees while in the love hole of his lady.


Meanwhile, Barbara begins her new position at the local hospital, where she is constantly hit on by her new boss, Dr. Lassiter (Jay O. Sanders, who slimeballs his way through the role of Slimeball). It is there she meets her highly unlikely love interest: Jason (Anthony Carrigan), a coma patient who apparently lived a very mean life of fists and cursing—so much that his wife, Betty (the ludicrously attractive Paolo Mendoza), is eager to pull his plug.

And so they do! Jason flatlines and the doctors and nurses do doctor and nurse things until wait a minute what's this oh gosh I guess Barbara is a little insane, because she kidnaps Jason's dead body, impossibly stuffs it into her SUV (along with the gurney), and drives him to her home. It is there she lays the body out and invites the ghost of Elijah to hop in and take him for a test drive.

Well, he does, and for the first half of the movie, not only does Elijah the Ghost ride in Jason the Body, but he sports a beard and wig so fake that even an "Unsolved Mysteries" actor would be embarrassed. The look this poor actor sports is reminiscent of Jesus Christ, the Geico Caveman, and Charles Manson, with the added bonus of clearly being brand new out of the beard bag. Why the filmmakers chose THIS look for the modern male, and not the Civil War soldier, who in flashbacks is played by the baby-faced and hairless body of a boy straight out of "The Hills" is beyond me, but that's okay, because if that were the case, I would have less to laugh at.

Actor Carrigan bravely chooses to portray this broken-down spirit without any emotion whatsoever, so that when he says stuff, you almost kind of care what he's saying sometimes. His performance will go down in history as the most affecting and heartbreaking since Larry Drake's  role as 'morgue slab corpse' in an episode of "The X Files." He also uses a sometimes there/sometimes not southern accent.

The musical score does what Elijah does not—attempts to force you to feel anything at all. While certainly not a bad score, there is hardly a single moment of silence in the film. Even scenes of Barbara walking down the hallway, or looking through files, is complemented by stirring music.

This isn't radio, folks—it's cinema. It's okay to have silence from time to time.

Elijah is understandably mystified by his new surroundings—what with being knock-knock-zoom-zoomed 150 years into the future. He points out the window to Henry, Barbara's black landlord, and asks, "Is that your house ni--er?"

Barbara goes on to explain that the Civil War is over—the south having lost—and that the n-word isn't used anymore, because we all have equality; there is no longer any such thing as master and slave, and we are all neighbors, regardless of our skin color. Elijah, who in his first life was a fervent confederate soldier, fighting with great passion for an ideal in which he powerfully believed, says, "Oh," and then drops the matter entirely.

You can imagine where it goes from here:

"Say, Abraham Lincoln is on your money? Better not react." (He doesn't.)

"You mean voices and faces come out of this magical noise box? I better instantly accept this and begin watching public domain programming for hours on end." (He does.)

The two lost souls begin a romantic affair, which when considering their ten-year age difference, is more than creepy. Barbara spends much of the time rubbing her face against Elijah's fake beard, not quite meeting his lips with her own, and moaning a little too loudly.

Soon, Barbara begins to suspect that Elijah is responsible for a nearby murder. And only one measly day after they BOTH drive by this very same murder scene and see the body covered in a white sheet, Barbara asks Elijah, "Did you know a girl was murdered recently?" to which Elijah responds, "No."

As if the filmmakers could sense my joy, Barbara cuts off Elijah's long hair and heavy beard, turning him into a typical hispter douchebag, complete with hipster douchebag rim glasses. This transformation then decreases the appearance of his age to roughly fifteen, making the remainder of their intimate scenes even creepier.


The ending eventually occurs, makes absolutely no sense whatsoever, and then lets us turn the movie off. Then you sit back and realize you've learned a little more about the world, each other, and yourself (and beards).

I give writer/director Steven Peros credit for making a movie he clearly believed in. This was certainly not a movie made for the masses, and the story he had hoped to fill with white-knuckled thrills hides somewhere within the unintentionally hilarious pastiche of badly realized "horror" scenes and tired jump scares. He avoided violence unless necessary and attempted to rely on Gothic horror as his guide, and for that he earns points, but alas, the movie is more Lifetime than Robert Wise. Ultimately, it's the story of a woman learning to overcome grief, but more importantly, learning the lesson that she doesn't need a man to make her happy. (Are you listening, Twilight ?)

Plus, let's face it: the Geico Caveman making a threatening face will never be threatening at all.
Posted by TEOS at 12:15 AM