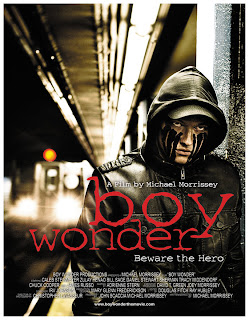 Movies like Kick-Ass and Defendor should be embarrassed that other movies like Boy Wonder exist. Though the movie hews closer to classic vigilante movies like Death Wish and even The Crow, shades of superhero DNA are inherent throughout the movie; it’s about a boy taking matters into his own hands when justice fails to locate the criminals responsible for the death of his mother. And the movie tells its story in a way that never sensationalizes what the boy does when he prowls the streets at night, hidden from sight in his black hooded sweatshirt. While Kick-Ass lends more towards kids beating the shit out of criminals, all the while getting the shit beat out of themselves, there’s never real danger in that movie. Because it’s supposed to be “fun” and “goofy.” In Boy Wonder, you feel for your protagonist and understand why he is out on the streets doing what he is doing, though you wish he wasn’t. You wish he could overcome the emotional torment that forces him to do the things he does. And that is the success of the movie.
In the film’s prologue, we witness through the boy’s eyes the death of his mother—seemingly the inadvertent casualty of a high-jacking gone wrong. We also go on to learn that the boy’s father is an abusive drunk, and responsible for the multiple bruises found on the boy’s body. Despite this, our protagonist, Sean Donovan, is a survivor (played with great brooding strength by Caleb Steinmeyer). He is a top student, though an introverted one, and has just one school friend to speak of. But like all high school students, he yearns to be accepted, as well as for the attention from the girl for whom he pines. His relationship with his father (years sober and calmed) is damaged because of their past. He spends his days at the local police station scrolling through mugshots of known criminals, trying in vain to locate the perp responsible for his mother’s death…or is he? Because when night falls, he slides on his black hooded sweatshirt and takes to the streets to locate people who feels has escaped justice (in "Dexter"-inspired fashion).
Meanwhile, a detective new to the precinct, Teresa Ames, notices Sean in a way that no one else has seemed to and almost immediately begins to suspect Sean of wrongdoing. Though the two begin to form an unlikely friendship, the idea of Sean living a double life is never totally out of Ames’ mind. Little do either of them know just how intertwined their past and future will become. 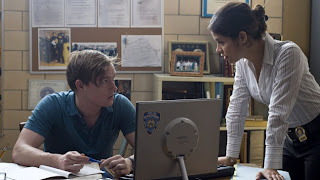 Boy Wonder is a brave movie, and a pretty remarkable film debut for Steinmeyer. It’s up to him to carry the movie—to make the audience feel his pain and to understand the gruesome things he feels he must do. And he pulls it off with ease. James Russo is also remarkable as Sean’s father, and while his part could have been more lazily written as the constant antagonistic drunk father, he is instead written as a man who has gone above and beyond to reform himself, and wants nothing more than for his son to love him the way the boy loved his mother. In fact, the acting is pretty stellar across the board, the only weak spot being Zulay Henao as Detective Ames. While not a bad actress, she is woefully miscast in the part of the hardened defective struggling to juggle a career and a broken family. Her pretty face betrays the past the screenwriter has given her, and her first scene in the movie (a fairly formulaic, and by now, cliché meeting of her new partner who accidentally comes off sounding racist despite meaning well) does not lend her any favors in trying to come across as an original take on a typical movie archetype.
I've read some reviews of the movie that call it "conceptually confused" between a superhero movie and a vigilante movie, and to a point, I can agree. However, I wouldn't describe it as "confused" as much as a careful hybrid of the two. And after all, what is a superhero if not a vigilante? Batman is a superhero, but is he also not a vigilante?


Boy Wonder takes its time in setting up each of its characters, leading to the climax that you may or may not see coming. Let’s face it, movies of today feel they need a twist, and when there’s one character whose identity remains mysterious throughout the movie, yet is ultimately responsible for the movie’s entire plot, you always go for the person you “least” suspect. In this case, it’s not a fault of the script, nor of the story the writer wanted to tell—but perhaps the movie would have been better off telling us upfront the sins of this character, so that Sean’s journey towards justice would have felt more suspenseful and heartbreaking.
GRADE: A-
Posted by TEOS at 12:55 PM