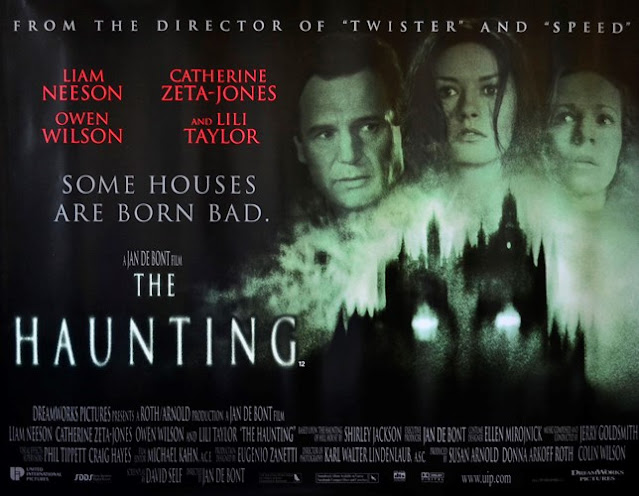 I blame Mike Flanagan and his brilliant adaptation, The Haunting of Hill House, for how unimpressively 1999’s The Haunting plays in our modern era. Though both are based on Shirley Jackson’s 1959 novel, ironically, it’s the miniseries which strays far from the novel’s surface story that’s the most successful adaptation, whereas The Haunting, though sticking very close to its source material (until the stupid finale), totally dismisses Jackson’s moral – the implications of loneliness, the dangers of isolation, and the emotional damage inflicted by the inability to feel “part” of something – in favor of lame spookshow spectacle, lame third-act twists, and Owen Wilson. The Haunting didn’t enjoy high marks upon its release in theaters what feels like a hundred years ago, but it’s one of those perfectly reasonable titles to touch base with from time to time for some superficial popcorn entertainment – one of those late-‘90s relics which hails from that moment in cinetime where CGI was just starting to become front and center in large-scale genre filmmaking. There’s 1997’s Mimic and Spawn, 1998’s Deep Rising and Species II, and 1999 had so many examples that it would be obnoxious to list them all, but let’s take a quick stroll down Memory Lane with Deep Blue Sea, The Mummy, End of Days, and House on Haunted Hill. There are a reckless number of examples from this era where studios spent over a hundred million dollars on horror productions, and mostly because of their visual effects. This approach didn’t result in any good movies, but it did result in some fun ones, and for some audiences, that’s enough.

Because of this ‘90s CGI explosion, this era’s offerings all look, feel, and sound the same – 9-0-C-G-I might as well be its own zip code in Hollywood because of how hilariously primitive and concretely tied to an era its films look when compared to some of the visual achievements pulled off by the recent likes of War for the Planet of the Apes or The Jungle Book. This was the biggest complaint with The Haunting way back when, and that complaint not only remains valid, but it’s actually much more relevant because of how far CGI has come – this alongside the mini revisionist renaissance we’ve seen and enjoyed regarding the rebirth of our favorite horror properties, which had long succumbed to near self-parody, now rebranded as serious and mature storytelling. NBC’s Hannibal rescued Hannibal Lecter from the ho-humness of Red Dragon and Hannibal Rising, purging Anthony Hopkins’ increasingly toothless take on the title character; 2018’s Halloween wiped away 40 years of baggage-filled sequels and made Michael Myers scary, mysterious, and motiveless once again; and Mike Flanagan went back to the most famous haunted house story in the land to create something beautifully terrifying and terrifyingly beautiful. (Its follow-up, The Haunting Of Bly Manor, is streaming now on Netflix.) 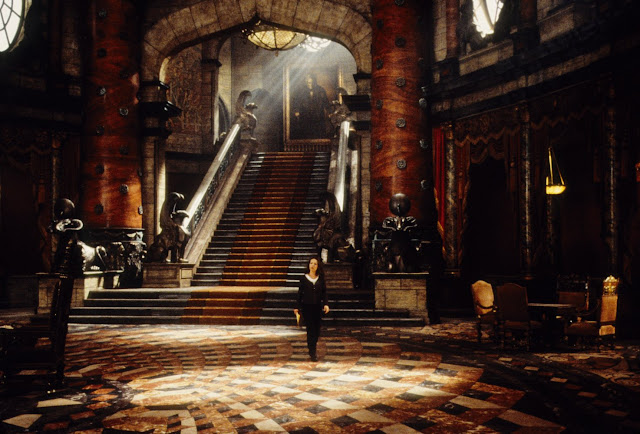 If you’re familiar with Robert Wise’s adaptation of The Haunting from 1963, then you know his approach was built on a foundation of suspense first and terror later – without ever falling back on a single visual effect. Spooky offscreen noises, ominous pounding on oaken double-doors, and the creepy insinuation that the other living occupants of the house weren’t to be trusted – these are what made The Haunting so frightening. It’s tempting to dismiss this no-frills approach to genre filmmaking in the modern era, considering all the horror flicks that have since come down the path that relied heavily on visual imagery – The Exorcist, Suspiria, right up to the modern era with The Conjuring (also starring Lili Taylor) or Hereditary – but 1999’s The Haunting never had enough faith in itself to rein in some of the stupid CGI in lieu of the fantastic production design of the house itself and the character dynamics that still (somewhat) contained enough ambiguously sinister behavior that suggested not everyone had Nell’s best interests at heart.

Ultimately, it’s for these reasons that The Haunting fails to leave any kind of lasting impression: the distillation of the characters as presented in the novel, and the overreliance on (poor) CGI instead of trying to establish a mood and tone, are enough to keep The Haunting from being, at the very least, a sturdy addition to the haunted house sub-genre. For the most part, screenwriter David Self (Road To Perdition) preserves the novel’s character archetypes with commendable loyalty: Lili Taylor’s Nell is an outcast, ostracized and belittled by her sister (Virginia Madsen) and brother-in-law, and desperate to forge her own path in the world. Liam Neeson’s Dr. Marrow seems well meaning and genuinely motivated by good doctorly intentions, even if his “sleep study” is a manipulation that eventually leads to a situation he can’t control. Catherine Zeta-Jones maintains Theodora’s passive aggressive flirtations and socialite-like flamboyance, although her open bisexuality, which had been left purposely ambiguous in Jackson’s story (a surprising addition for the 1950s) is just as broad and obvious as the rest of her character. Lastly, there’s Owen Wilson, ably playing Luke the California mimbo, exorcised of his implied substance addict canon and his ties to the owners of Hill House that would’ve threatened to make him an interesting character. (I still remember our theater’s audience laughing every time Owen Wilson was on screen, even when he wasn’t vying for comedy relief.) Ironically, in concept, everyone is perfectly cast to capture their characters as presented in the novel: Neeson is esteemed and trustworthy, Zeta-Jones is airy and free-spirited, Wilson is fun-loving and free of responsibility, and Taylor is lost, lonely, and wanting nothing but to be accepted. The groundwork is there, but for whatever reason, the film can’t seem to lure the performers’ take on the characters across the finish line. The ensemble’s performances are fairly mundane with most of the cast not going out of their way to overextend themselves for a project that, in their estimation, didn’t call for it, despite this being one of Steven Spielberg’s earliest producing credits through his brand new Dreamworks Entertainment banner. Zeta-Jones’ Theo comes off as a teenaged girl, rattling off some of the film’s most bone-headed dialogue, especially as she refers to her boots as “savage kicks,” and poor Taylor does her best during the final act when she’s forced to spew the kind of confrontational dialogue that’s directed at the house’s main threat but is actually provided solely so the audience knows what the hell is happening in the very movie they’ve been watching for the last eighty minutes. If one of cinema’s Ten Commandments was Thou shall not have characters speak aloud unto themselves for the betterment of observers’ understanding, The Haunting would be the most blasphemous of them all. 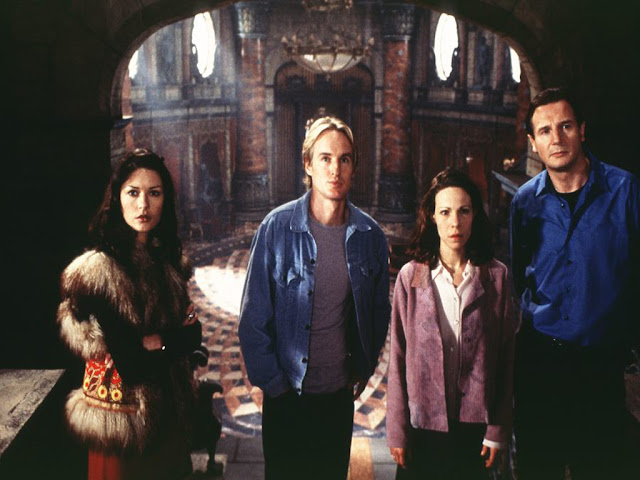 Everything else aside, there remains the most important question for a horror film, especially a haunted house horror film: is it scary? Well, you guessed it: no. It’s not. In fact, except for the demise of Wilson’s character, in what remains one of the dumbest kill scenes in horror history, The Haunting is so neutered that its PG-13 rating almost feels like an insult to kids twelve and under. I guess we can blame Spielberg, who apparently hated the movie and had his name removed, for the inadvertent overblown spectacle, as he chose Jan de Bont, cinematographer-turned-director known for his previous unsubtle action-adventure hits Speed and Twister (and not-at-all-a-hit Speed 2: Cruise Control), to direct the update of a classic flick known for its low-key subtlety. That de Bont had never before (or since) directed a horror flick could certainly point in the direction of his hiring being a mistake, but to date, he only has five directorial credits, with a mere two of them enjoying solid reviews and healthy box office. (His last credit as a director was the awkwardly titled Lara Croft Tomb Raider: The Cradle of Life waaay back in 2003.) While The Haunting does have a fair bit to boast about, mainly Jerry Goldsmith’s flourishing musical score, gorgeous production design, and Hill House’s foreboding façade (the opening flyover shot of the house complemented by sounds of massive and weathered preternatural breathing sets a tone that the rest of the film fails to live up to), they’re all soon upstaged by some embarrassingly dodgy CGI, as if the movie didn’t have enough faith in itself to rely solely on its intricately designed environments to captivate audiences. In 1963, Wise paid a grip to knock loudly on the other side of some bedroom doors. In 1999, Spielberg paid a visual effects team millions of dollars to turn a bedroom into an ominous face, complete with bloodshot window-eyes and a bed that sprouts spider-like legs. The first is scary, the second is not. High on visuals, low on creativity: that’s late-‘90s genre in a nutshell.

Neither time nor advances in approaches to classic material have been kind to The Haunting, which, even putting aside the CGI, very much feels like a ‘90s production, dated by its look, feel, and some accidentally hilarious moments like when Neeson reassures his sleep study group that, in case of emergencies, he has his “trusty cell telephone.” Old school audiences enjoyed the novel and the subsequent adaptation that came along four years later. Brand new audiences well acquainted with elongated storytelling as essayed by services like Netflix and HBO found much more substance to enjoy with 2018’s The Haunting of Hill House. This leaves 1999’s The Haunting lost entirely in no man’s land – not nearly frightening enough to command attention, nor “deep” enough to reach the audience’s hearts through its characters, The Haunting is just kind of there – a harmless but mediocre slice of popcorn entertainment that doesn’t come close to haunting its viewers.