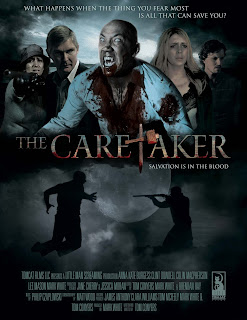 "The fruit and the feather fall at the same rate.
One is crushed, and one is tickled by its fate."

The world of fiction is currently saturated with vampires. I know it and you know it. And we can blame all that Twilight nonsense, which took our undead, blood-sucking creatures of the night and made them play baseball and willingly go to high school for some reason, even though they're technically corpses and can't do much with a diploma.

So when someone goes out and makes a low budget vampire movie, I groan. How can I not groan? How can I maintain enthusiasm when someone thinks they can bring something new to the formula? How about you just go make a spoof version of Paranormal Activity with a really punchliney title? I'll wait here.

But The Caretaker proves there's still blood to be sucked out of the old sub-genre yet. It is a clever, bleak, and even thoughtful film about the ties that bind us - and how we're better off trusting a mortal enemy than our own neighbor.

It is the very beginning of a sudden outbreak of vampirism occurring across Australia. What's believed to be the flu turns out to be something much more vicious and deadly. Soon, a group of strangers find themselves fleeing to the countryside in an effort to leave the madness of the city behind. At an isolated house in a distant rural area, a wine salesman, his ailing mother, and her doctor are already hunkering down, trying to make sense of what they are hearing about the outbreak. Our fleeing humans are surprised to find out, however, that the good doctor is actually inflicted with the vampire disease. Though the humans don't have much of a choice, the agreement is forged: the doctor will protect the humans from other vampires by night, if they will protect him from revenge-seeking humans by day.

You should have known it was all going to end very badly.

The Caretaker effectively presents what George A. Romero has been saying in his zombie films for years: us humans are worse. Because we are selfish, and greedy, and willing to do anything to survive. At first all seems as well as it could be. Certain characters are dicks and bitches, but besides being irritating, no one seems up to anything nefarious. But that doesn't last.

For a low budget, the ensemble cast are frighteningly good. Special mention must be made of Lee Mason, who I swear I've seen in something else, but whose filmography says otherwise. This doppelganger of C. Thomas Howell proves himself to be a domineering and strong figure - he assumes the role of leader without even trying.

The direction by Tom Conyers is also confident. His handling of the powers vampires possess are unnatural enough to be unsettling, but never becomes cartoonish as they would have in a multi-million dollar film. The make-up effects are basic, but effective - again, just what's required is utilized. The most striking aspect of The Caretaker is Conyers' insistence that the concept be taken seriously. This is a surprisingly introspective film, filled with characters struggling with their own mortality, and with their own ruminations on what kind of life they lived leading up to this moment in time. An especially nice scene in which one of these characters unhappy with the person they have become plays a simple melody on the piano, and as each character hears her playing, they are all connected - however briefly. Perhaps because its a singular moment of peace in otherwise non-stop chaos, where people aren't to be trusted, and new bonds destroy and replace old ones.

Unfortunately, the musical score can be intrusive and even exhausting at times, as there doesn't seem to be one frame without a theme or a sting. And it doesn't help that the mournful strings you're hearing are clearly the result of a synthesizer, either. It does the film a disservice at times, reminding the viewer just how cheaply made it was. I'm always of the mind that if you're making a low budget feature, use music sparingly, unless you have access to a musician with a wealth of resources and willing to work cheap as a favor. I should stress that the score itself isn't bad...there's just too much of it, and after a while, you can't help but hear the flaws.

I also have to point my finger at its ending. Without giving anything away, let's just say it more than liberally borrows from the ending of another vampire film with a gimmick from the last decade. But, a good ending is a good ending, so I'll allow it.

Overall, I dug this undead flick. Similar thematically to Jim Mickle's Stakeland (but not nearly the same scope), it is an interesting character piece - a realistic observational experiment on what would happen in such an event, and how humanity would react. Sadly (and depressingly), The Caretaker might just be spot on.

Once again, my jaded and cynical self has been proven wrong by a film from which I expected little to nothing. It's so easy to look at a shoddy poster or video artwork and make a snap judgment, and if you did that in the case of The Caretaker, you'd be missing out like I almost did.