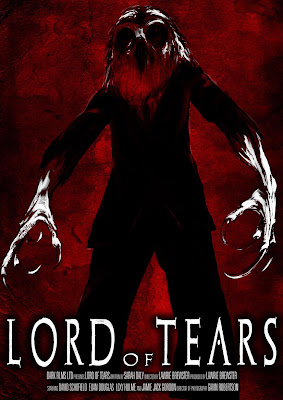 Filmmaker Lawrie Brewster of New Age Film was kind enough to reach out to provide us with some information on his new film, Lord of Tears, which is currently in the midst of a very successful Kickstarter campaign.

Brewster describes the film as:

...a British Chiller in the classic tradition of films such as The Wickerman, The Innocents, and The Haunting. Our story concerns a man trapped in a crumbling mansion, stalked by Owl Headed monster in the misty highlands of Scotland, on a mission to piece together a childhood broken apart by repressed memory and dark secrets. It takes inspiration from classic mythology, ancient history and modern legends such as those of - Slender Man!

The script is written by Sarah Daly (the music artist Metaphorest, and cousin of Kate Bush), stars David Schofield (of Pirates of the Caribbean, Gladiator) and is directed by myself whose (past collaborations with Sarah Daly) has included works with Joseph Gordon Levitt and Channing Tatum, that have featured at Sundance and SXSW.

Click here for info on the film's Kickstarter campaign, Facebook, and the ever popular Tumblr. I am looking very much forward to checking this one out.

Lord of Tears Official Trailer from Lawrie Brewster on Vimeo.
Posted by TEOS at 12:00 AM