I've always been big on paranormal stuff. As a matter of fact, I've always been fascinated with anything that's unexplainable. So much that I used to go out looking for the stuff. So all of this time trying to find ghosts and I have failed miserably. That is until my older brother moved into an old, old house with about 4 of his buddies.

When his friend first bought the house, all of the second floor windows were painted black. Yes, the actual glass was painted black. Well, apparently, a child was murdered there. He was hung in a closet on the second floor. The body of the child was wrapped in plastic (probably because of the smell) while still hanging in the closet. He wasn't found until after the family moved out of the house 4-6 months later, because he was actually hanging between two floors in the house.

It was a big house with 3 floors, 3 bathrooms, and if I remember correctly, there were 7 bedrooms. When the house was purchased, there were problems with the roof, so they covered it with a tarp until they could get it fixed the year after.

Since there was a tarp on the roof of the house, on windy nights you could always hear it blowing around. It had a distinct sound - plastic slapping around all over the place...

Whenever I went to stay there and party with them I would end up sleeping in the living room because the couch had a fold out bed. So, one night, me and a buddy are staying there on the fold out bed. I'm having trouble sleeping because the wind is blowing hard and that damn tarp is making a shitload of noise. Even though it's 3 stories above me I can still hear it. So I pull the blankets off of my head and notice that the hallway light and back porch light are on. First I turn off the hallway light, then I head towards the kitchen since the back porch connects to it...

So, as I turn into the kitchen on my way to the back porch, all I see is black and all I hear is the tarp slapping against everything. Not just the roof, but everywhere. It's so loud that it's damn near impossible that it could make such loud noise (especially without waking up the 8 other people in the house at the time). I couldn't hear anything else. It was actually ringing in my ears.

So I started walking through the kitchen, then BAM! I bumped into something in the middle of the kitchen and as soon as I look up, I see something that's plastic. At this point I'm completely calm thinking that they must have purchased some kind of new appliance that has not been hooked up yet, even though I would have obviously noticed it during the party when everyone was awake.

So, I touch it for a few seconds to get a feel of what I just ran into... As I look up, I notice that it's not an appliance at all. It's a human being. It's a person. He or she is wrapped in plastic in the middle of the kitchen. 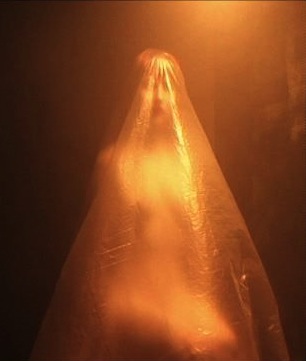