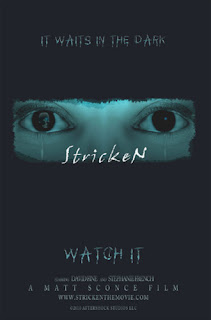 In the wake of her mother's death and her father's suicide, Sarah Black is being besieged with awful nightmares. Images of her rotting, black-eyed father are so haunting that she sees them whenever she closes her eyes, even when she's awake. Naturally she begins to think she's cracking up - that the things she is seeing are more than just a byproduct of her emotional state.

In a defensive move, she buries herself in her job at Whispering Pines, a convalescent home, hoping to get her mind off everything...but her horrors follow her wherever she goes. And she attracts the attention of two homicide detectives after one of her patients goes missing and dies at the hospital. They see a tenuous connection to a ten-year-old murder case that they were never able to put to bed, and so they find reasons to always hang around.

Naturally, Sarah begins to slowly piece together all that she has seen and dreamed.  She begins to realize that it's not all just in her head. There is a very unnatural force plaguing not just her, but also her friends, who begin to fall victim one by one. 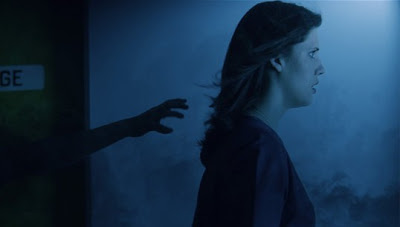 Visually, there is a lot to admire about Stricken. The most effective methods to scare your audiences will always be the easiest: misdirection, sudden movements, darkness, etc. In this regard, writer/director Matthew Sconce is able to overcome his limited budget. Though we've seen many of these types of scares before - a character stoops to reveal a ghostly figure behind her, or a phantom arm reaches into the frame, nearly touching our lead before she turns to reveal...nothing - there's a reason filmmakers still fall back on them: because they work. While some of the techniques are old school, there is a fine mixture of the nu, taking its cue from J-horror of the last decade, but not completely aping it.

It's refreshing to see emphasis on character as well, and that goes beyond our lead and encompasses our two detectives, including Detective Aro. He and his partner are older, bitter, hardened, and haunted by their years on the force. Again, this is familiar territory because they've become dependable techniques with which to tell a story. Oftentimes your detective character isn't just trying to solve a crime because it's his job - rather he's trying to fix within himself the thing that broke long ago. Redemption of self, salvation of soul, etc.

The story is certainly engaging enough to keep you interested. The film never shows its hand too early and there's a constant genuine sense of intrigue.

Unfortunately the remainder of the production is severely indicative of said budget. Our lead played by Stephanie French stumbles through most of her role, concentrating too hard on being an actress and not enough on acting. Certain scenes have her forcing her performance instead of allowing it to feel organic and results in occasionally taking the audience out of the moment. The supporting cast, in addition, simply isn't up to the task. Some actors look completely bored with their roles while others are simply distractingly bad. 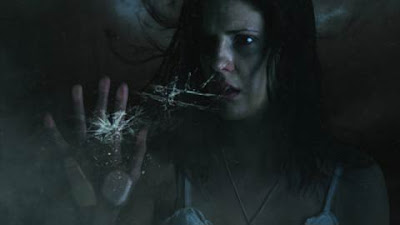 When checking out something made on a shoestring budget, I try to be as generous and painless as possible. A person should not critique a film like Stricken in the same manner they would a film like, say, the recently released Mama. Stricken does not have a major studio, millions of dollars, and Guillermo Del Toro. It has an independent production, maybe a hundred thousand, and a bunch of amateur filmmakers working with the resources they have available to them. Unfortunately this often includes the usual pratfalls: weak actors and techies eager to show off their skills and end up going overboard. (I'm speaking more in generalities than I am specifically about this film.)

Despite all that, some of the visuals present in Stricken aren't that far off from that of last year's Sinister - a film I happened to love, by the way. And I would love to see what Matthew Sconce could do with several million dollars and access to a more experienced cast. If I'm lucky, perhaps one day I will.