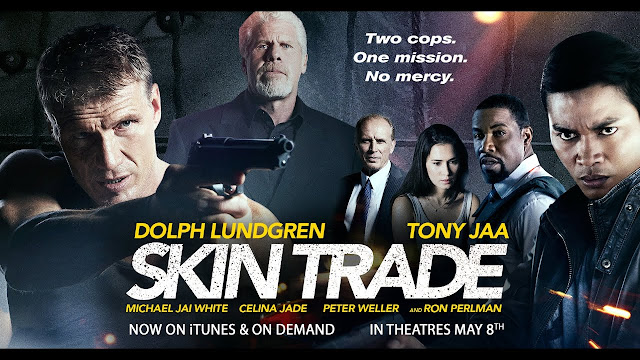 Film fans are very discerning, and very segmented, which is something that can be as advantageous as it can be detrimental. But the most important thing these film fans need to realize, or maintain, is that there’s a difference between a film being good in general, and a film being good for what it is. It’s when one comes to define what “it” means that things can get complicated.

Skin Trade is one of the better limited-release/direct-to-video actioners starring Dolph Lundgren who in the course of ninety minutes kills a LOT of men. Much like his character of Andrew Scott in the original Universal Soldier, Mr. Lundgren, too, must be part machine, as Skin Trade marks his seventh feature film in the last two years. (He also somehow managed to fit in an entire season of a television show.) While Lundgren has built himself a steady and loyal fan-base over the years (your reviewer counts himself as one), and except for nostalgia, it’s sometimes tempting to ask why: simply put, the busy action icon’s output lacks, how shall we put this…consistency. At least, not in the positive sense. Though it may be painful to say, a large portion of Dolph’s post-Rocky IV career is inundated with forgettable titles destined for video store shelves (and in the post-millennium, the Redbox). While it might be relieving for the curious to report that Skin Trade is Dolph’s best action vehicle, as a lead, in quite a while, let’s also keep in mind what we’re utilizing as a basis for comparison. Let’s also discuss how accidentally hilarious so much of it plays out. 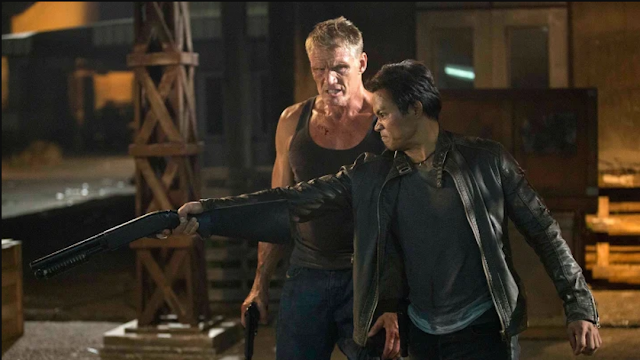 Dolph plays New Jersey detective named Nick Cassidy, who one night on the docks of Newark kills the son of Serbian crime boss Viktor Dragovic (Ron Perlman) and inadvertently invites the wrath of the Dragovic family down upon him, leading to the explosive deaths of his wife and daughter. Now on the run in Thailand, he is pursued by Thai detective Tony Vitayakui (Tony Jaa, in his shaky English-language debut), who believes Nick is responsible for the death of his partner. Though initially at odds (meaning, violence is committed upon each other), they begin to work together in an effort to bring down Dragovic for good and put an end to his human trafficking operation. All during this, Nick is relentlessly pursued by FBI Agent Eddie Reed (Michael Jai White), who wants to take Nick down – at any cost.

When your film stars Dolph Lundgren, Tony Jaa, Michael Jai White, and Robocop himself, Peter Weller, let’s just say it’s clear the filmmakers are attempting to appeal to a certain faction of their potential audience – an audience that wants to see brutal violence, impressive stunts, and face-smashing fight choreography, all committed by men they have come to idolize. It’s an audience who wants to see Lundgren land cannon-like blows upon his enemies, Jaa take out a room full of men with nothing more than his belt, and Jai White make every living breathing man on Planet Earth feel like an utter waste of gooey skin. In that regard, Skin Trade is massively entertaining. Whether violent shootouts or man-on-man fisticuffs, every icon on the marquee shares a scene with the other, and does what they do best. Lundgren is brute force, Jaa defies every natural biological and physical law, and Jai White…well, god damn, you shit your pants just looking at him. Every confrontation is more thrilling and well-executed than the previous, and it’s during these moments that you won’t be questioning why you’re watching the film in the first place. But while those things aren’t occurring… 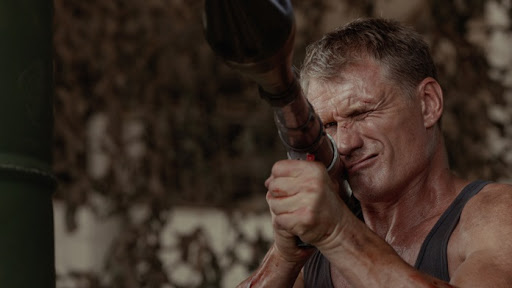 Skin Trade first falters with its script, which comes dangerously close to bordering on parody. The dialogue spewed by our characters at no point comes close to realistic and often results in unexpected laughs. Dragovic’s son grasping an MP5 and rushing into a shoot-out while bellowing “I AM MY FATHER’S SON!” only to be immediately cut down is the stuff of Zucker, Zucker, and Abrahams. Lundgren stepping into the interrogation room and staring Dragovic hard in the eye, only to throw down a file folder and demand, “How do you sleep at night?” ain’t helping. But perhaps the best belongs to the scene in which Dolph lies near comatose in a hospital bed following the explosive attack that stole the lives of his wife and daughter. Lundgren, his face half-bandaged, looks up at Costello (Weller), his superior, and asks if his wife and daughter survived the attack. Costello looks down, stoically, emotionally, and shakes his head, confirming Dolph’s worst nightmare…leaving Jai White’s Reed to step up and unnecessarily say, “Your wife and daughter are dead.”

The interaction between many of the character seems half-baked, as if written by an automaton trying to mimic human behavior. Cassidy comes home to his teenage daughter and awkwardly ruffles her hair, as if she were instead his ten-year-old so, before she stands up and recites Shakespeare by heart. Dolph, a father in real life to two beautiful teenage daughters, for some reason seems entirely out of his element interacting with who is supposed to be his child, and appears to want the scene over as soon as possible. Once this discomfort ceases, Cassidy’s attractive wife reminds him that it’s actually their anniversary, which he has completely forgotten; watch as she grins big and peels off her robe to reveal a fiery red negligee to pleasure him with, anyway. Anniversary-schmanniversary – let’s bang!

Weller and Perlman appear in very limited capacities, with the latter showing up only during the first act and the last ten minutes, and the former in two scenes in which he's saddled with an awful lot of unconvincing exposition. Weller, even though he's playing a traditional character, seems rather uncomfortable with what he's doing - and this is a guy who once masturbated a giant bug-typewriter on screen. Based on Perlman's performance, it's evident he assumed the film would hardly be seen and didn't expect a label as prominent and respected as Magnet/Magnolia to secure distribution, because except for trying on a lazy Russian accent, he can barely be bothered to appear present. He's capable of far better, which he's already proven with his six-season run on Sons of Anarchy (on which he worked under the eye of director Weller for several episodes).

The direction by Ekachai Uekrongtham, too, shows the kind of dangerous confidence expressed by the overly confident. Editing choices meant to be shocking and unorthodox simply come across as confusing, even disorienting at times. Scenes will begin with the unmistakable feeling that the audience didn't arrive for them in time, and are interrupting something that’s long been in progress. Other scenes will include spliced single shots of characters looking forlornly down at the ground or off into the distance for no real reason, other than to invoke reactions of, “Boy, is HE sad!” Much like national public radio, at times it feels like Skin Trade contains a lot of dead air, leaving it feeling awkward and unfinished. 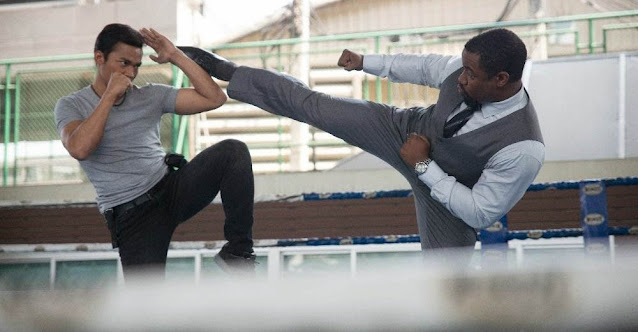 Perhaps the most telling that Skin Trade was going more for of an Expendables-like casting extravaganza is confirmed by its half-baked ending, which less seems to be promising a sequel and more seems to be suggesting that because the bad guys are dead, and the good guys have no one left to blow away with shotguns or violently pummel about the body, there’s really no reason for the film to keep happening. The last lingering conflict that needs to be resolved is addressed in a casual voice over tantamount to, "Yeah, I'll get to it."

Ultimately, everything above is for naught. It's window dressing. Details. To potential audience members of Skin Trade, look at the poster. Look at those names. Lundgren. Jaa. Jai White. Does that appeal to you? Do you want to see these guys share the screen and commit bloody pain against each other? Do you want to witness these demigods lay to waste dozens of bad guys? Then at the very least, you’ll have a great time.

If you’re intrigued by Skin Trade for any other reason, then I don’t know how you sleep at night. 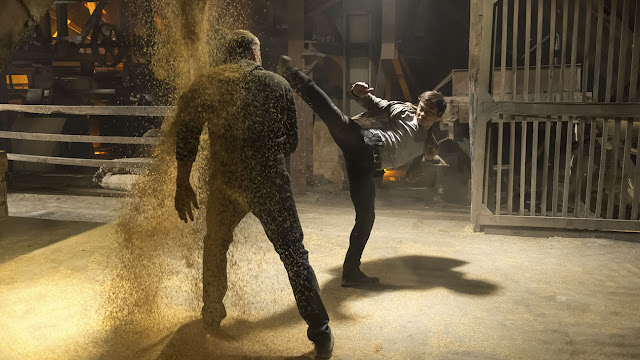