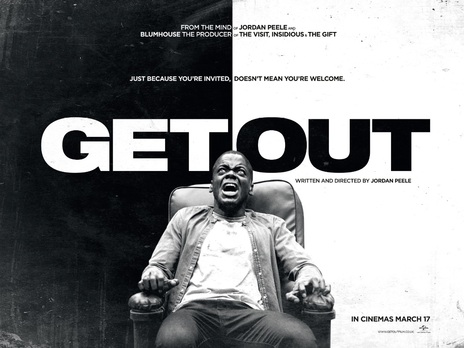 Within Get Out’s opening moments, writer/director Jordan Peele manages to homage both John Carpenter’s Halloween – as the camera glides across leafy, suburban streets and an obscured humanoid threat shadows an innocent person in the wrong place at the wrong time – and Stanley Kubrick’s The Shining, as this same person remarks about how those same suburban streets are “like a hedge maze.” This opening concludes with a simply done but expertly executed sequence which doesn’t linger long enough for its suspense to grow tedious; it’s over before you fully realize it’s begun, and as you see this play out before you, you’re taken with the bizarre notion that not only are you about to watch a horror/thriller from one of television’s best and underrated comedians – but that the guy knows his genre shit.

When critical praise for Peele’s directorial debut began rolling in – and for an entirely different genre from which he was previously known – it was during these commendations that reviewers insisted on downplaying the different aspects of comedy that were still pretty prevalent in what was marketed as a straight horror/thriller. From the more obvious broader moments of white-meets-black-culture clash, to the severe black comedy aspects of the admittedly over-the-top twist, Get Out’s creator was smart enough to know that making a film as still inherently angry as it was would go over better so long as it could rely on these multi-layered approaches to humor. That’s something that only the comedy genre – and especially the black comedy sub-genre – allows. That’s its biggest strength: that it can still reflect the anger and fears and frustrations of its writer or director, but without sacrificing the good time and titillation that audiences still want to experience in the theater. If you’re watching Get Out and not recognizing it as a black comedy, then you’re risking your enjoyment. Yes, it’s a horror film, but it is a comedy as well – just one very different than what Peele and his comedian partner Keegan-Michael Key farmed so well during their successful run of Comedy Central’s Key & Peele. 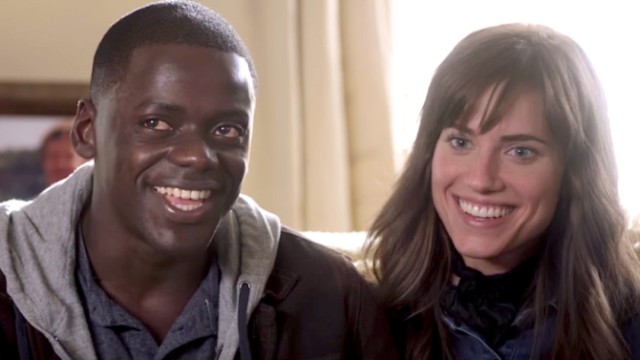 Get Out, a sort of Guess Who’s Coming to Dinner? meets The Texas Chain Saw Massacre, exists in a post-Black Lives Matter and post-Trump world. Up to now, the stain of racism that will sadly always permeate throughout this country, had been dormant – not altogether extinct, but quiet. And then wave after wave of controversial police shootings began; and, like almost anything else in the era of Modern America, they became politicized. Liberals backed the victims; conservatives backed the police. It just became one more line drawn in the sand. And politicians seized on this. Trump fanned those flames and made hate speak socially acceptable. It’s no coincidence that hate groups have felt empowered following not just his victory on election day but since the earliest days of his presidency. As I write this, white supremacists are gathering – proudly – in New Orleans, bearing torches, to protest the removal of state symbols representing hatred and a “once”-divided nation. Drunken Texans are shouting slurs on beaches at Muslim families. Racist incidents are surging in schools.

What the fuck is happening!

For so long things weren’t racially perfect (nowhere near), but it was put back in the closet — only taken back out for special occasions or the random, isolated incident. But these days, it’s apparently not just okay to be a proud, outspoken racist — it’s your American duty. And those in the community who represent the target of this hate are speaking out against it. Everyone is finding their own outlet to do it. With Get Out, Jordan Peele is using his usual brand married to a horror approach — and if nothing else, the horror genre has proven time and time again that it can be used to tell (while disguising) the angriest stories told by the most frustrated filmmakers.

Some people – in their undying drive to become fake outraged via the Internet whenever they read something they don’t agree with — probably won’t like that, but this is a matter that has to be confronted if Get Out is to be fairly appraised and explain why it’s so relevant. [And the remainder of this paragraph gets into spoiler territory, so if you’re a Get Out virgin, then GET OUT…to the next section.] The idea behind Get Out – the crux behind the motivations of the Armitage family (I’m sensing another Carpenter reference there) – is absurd: the harvesting of strong and vibrant black men and women for their more desirable traits, with the leftovers being turned into soulless automatons serving their white owners in whatever ways they’ve been programmed. Taking that silliness from the film and examining the concept under the microscope of the real world, is it really that absurd? Society chooses to worship certain African Americans as athletes, as actors, as musicians. We adopt certain aspects of their culture and fashion and leave others behind. Sometimes we even elect them to political office so we can feel really good about ourselves and we can pretend that racism is that thing which died in the 1960s. (Yet we get annoyed that black Santa Clause decorations exist because THE REAL SANTA MIGHT BE OFFENDED.) But even as we shower our chosen few with adoration and celebrity worship, we discard the rest. We change the channel mid-news report about an unarmed black man or boy being shot by the police in a sketchy shooting. “I’m no racist, but,” begins the guy in your family who is obviously racist. “They’re not ALL bad, but,” begins the woman at your office who thinks they’re all bad. Get Out's message isn’t anything new, but it is conveying it in a different way. And the message is that racism hasn’t gone away — will probably never go away — and for all the time it’s here, those affected aren’t going to take it sitting down.

These days, in America, everyone is angry. I am, and you are. Even if you got the president you wanted, chances are good that you’re either feeling buyer’s remorse, or you were angry to begin with and voted for the orange Hail Mary hoping his magic wand would reverse everything you think is wrong with our country. But the thing to remember is you don’t have exclusivity on anger. No one does. Jordan Peele is allowed to be as angry as the rest of us, but while we all complain on the Internet behind avatars bearing anything other than our real faces and nicknames bearing anything other than what’s on our birth certificate, Peele is at least out there, first, contributing a solid title to the horror genre, but second, crafting something that kicks at the hornet’s nest in a way that’s both playful as well as furious. Though Get Out falls victim to predictability in certain areas and laziness in others, its uniqueness and bravery more than make up for it – and, above all, it wants to start a conversation that many of us aren’t ready to have.