I'd already been out there for about four days, doing some off trail hiking, and I had a great time. I used to love going out in the woods by myself; I liked the solitude. I must have gotten turned around; I didn't end up back where I wanted to be at what was supposed to be the end of my trip. I later found out that I had been going in the almost complete opposite direction of my car. It was about three days after I was supposed to be home. I was just trying to get out of there, when it started with seeing things.

Just on the edge of my vision; shadows. I'd look, but then there'd be nothing there. At night, I would hear noises outside my tent. At first I thought it was just animals, and I'm sure some of the sounds were, but others...I heard scratching, and sometimes late at night, I'd wake up and hear breathing, not like any animal. I'd call out, thinking maybe someone was there, but I'd never get an answer.

This went on for a few days; I thought maybe it was just the woods getting to me. You hear horror stories about hunters who get lost and start hallucinating, or who die of thirst with water in their packs. The forest can mess with you. But about a week after I got lost, I saw her off in the distance, maybe 200 ft. away, hands at her sides, and she was tall. Six or seven feet, with her head craned downward, like she was deformed or something. But she was still looking at me.

She wore this dirty dress that hung down to the ground. I called out, but she didn't do or say anything. I started running towards her. I was scared, but by then I was worried that I wasn't going to make it out of those woods. I got within maybe 100 ft, but she stepped behind a tree, and when I got up there, I was just alone. I don't know where she could have gone.

The next couple days I didn't see anything, and the nights were quiet. I just kept following this creek, hoping I'd find something, anything. I ran out of food on the tenth day, and that night I woke up, not sure what time it was, to this laughing from outside; a low giggling, it lasted for a few seconds. Had I dreamt it? I opened the flap of my tent and called out, but all I could hear was the sound of running water, which was strange. There should have been bugs, deer, wind, something...but it was just so quiet.

Then a loud snap from about twenty feet away I shined my flashlight and I saw her there, half-hidden, poking out from behind a tree, grinning at me. I got a better look at her than before. She was old, her hair done up in a bun. And her face was...distorted. Her nose was too long, crooked. Her eyes were too close together, too big. Black. We stared at each other for a long time, and when I called out to her, her grin just got wider. I just sat there, frozen, looking at her. I yelled again; I asked her what she wanted. And she just laughed, this scratchy, painful laugh. Then she stepped out of the light and I couldn't find her again.

The rest of the night, I heard...things outside. Even the constant bubbling of the creek scared me. I wanted out; I was hungry, exhausted, and scared for my life. I truly believed that I was going to die in those woods. At first light I set out, walking as fast as I could away from my campsite. Sometime in the late afternoon, I came across an old logging road. It didn't look like it had been used in years, and I knew that it didn't mean that I was safe yet, but still, seeing that sign of humanity was happiest moment of life.

It was getting dark and I felt like I was going to pass out, but I didn't want to stop. I don't think that I could have slept anyway. Somehow I found the energy to keep going. About two hours after I started following the road, it was pitch black out, and it started to rain. I'd been lucky enough to have good enough weather for my trip, but within a few minutes it was pouring. I was plodding along as fast as I could when I heard the footsteps behind me. I'd stop and listen, and they would stop, too. I'd start walking and I'd hear them again. A few times I thought that I could see her, stopped not too far behind me. And more than once I heard her laughing, that disgusting laugh.

It was almost dawn when I came to the top of a hill and saw lights. Lights! Mankind! Civilization! I practically fell down the hill, stumbling to the door of the small house, I must have looked like some kind of monster; dirty, wet, exhausted. They took me inl it was an old couple; they gave me some food and a bed to sleep in. I woke up and they told me that I slept for 15 hours. I told them about the woman I saw, and nice as they were, I could tell that I was making them uncomfortable. They told me it was just the hunger, but I know what I saw. Out there, deep in the woods. And I'll never forget the laughing. 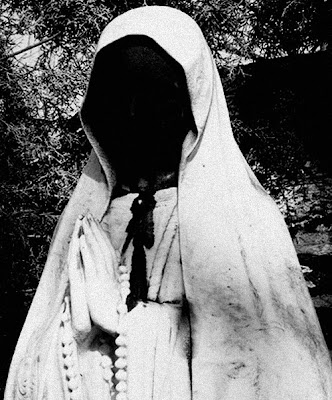