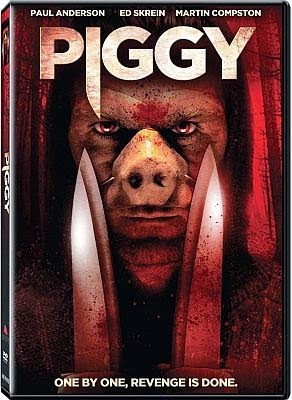 The rather cornball cover art chosen for the video release of Piggy is, while cosmetically correct, tonally misleading. It’s easy to look at that picture of a man holding not just one but TWO knives and wearing a pig mask and thinking, “Oh boy, here we go.” What Piggy actually is, however, is not some random, generic, slice-and-dice. Technically it’s not even a horror film. (But that doesn’t mean it’s not horrific.)

Joe (Martin Compston, The Disappearance of Alice Creed) is a shy Londonite longing for human interaction much like all of us do. His only real friend appears to be his brother, Jamie (Ed Skrein, “Game of Thrones” [Daario Naharis: the season three version]), who may or may not be romantically involved with Claire (Louise Dylan), whom Joe may or may not be crushing on. One night at a local pub, Joe quite accidentally sets off a chain of events with a local gang that leads to some tossed threats, some minor fisticuffs action, and eventually the stabbing murder of Jamie. Joe naturally blames himself for having caused the conflict to escalate out of control and he disappears inside himself, confining himself to his apartment. That is until Piggy (Paul Anderson, Sherlock Holmes: A Game of Shadows) knocks on his door, explaining that he was mates with his brother and will be around should Joe need anything. That “need” turns out to be vigilante revenge, unleashed upon each member of the gang responsible for Jamie’s death, except for that of the gang leader, who ends up in prison on an unrelated drug charge. Joe rides his fury at the loss of his brother and enjoys a front-seat view of Piggy’s fury against the gang members, but soon Joe starts to feel the opposite, becoming disturbed by Piggy’s unhinged and incredibly violent attacks on their prey. Soon Joe wants nothing more to do with Piggy…who doesn’t like suddenly not being needed anymore. 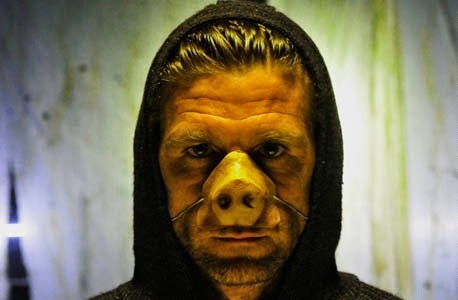 While watching Piggy, I couldn’t help but keep Fight Club in the back of my mind. Though tonally, one film has nothing in common with the other, I was struck by one particular dynamic the two films do share: that of one strange mysterious character quite randomly showing up in the life of another and providing some measure of strength and/or awakening that our “narrator” was missing. Post-viewing, and after having done some research, I found I was not alone in thinking like this. So it was when the film was leading up to its inevitable payoff that I (wrongly) assumed I knew the twist to be coming.

Luckily, the film was smarter than I was.

The power of Piggy comes from its feeling much more violent then it actually is. And don’t get me wrong, it is violent, but for every one brutal throat slash or head-stomp, we get several more left to our imagination. Piggy is out to make you unsettled and disturbed, sure, but it wants to earn that reaction from you. It also wants to make you question what exactly constitutes strength in a person. Is it taking revenge through force? Or is it confronting your own fears and taking responsibilities for your own actions? 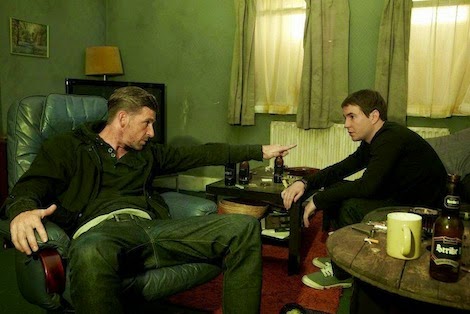 The acting ensemble delivers on every level, perhaps top honors going to Anderson as the titular character. Everyone shares excellent chemistry, though they all look appropriately glum beneath writer/director Kieron Hawkes’ muted palette.The film is well-written, somberly shot, and beautifully scored. I'll be, it's actually a film.

Vigilantism is never largely discussed as a sub-genre of filmmaking, though it remains ever popular, recently attracting an eclectic collection of names like The Rock, Jodie Foster, Kevin Bacon, and Rainn Wilson. There is something dangerously appealing of seeing someone out for revenge and willing to go to great lengths to achieve it. The rational side of us know such actions are better left to the judicial system, but the emotional side of us live vicariously through our chosen vigilante as he/she exacts the kind of justice their targets have coming.

Piggy ends on an extremely dour note, but one that will have you smiling anyway.