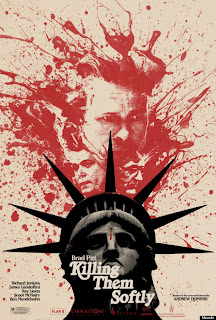 Did you see Killing Them Softly this weekend?

Based on the box office reports, you didn't. Nor do you know anyone who did.
You really should, though – so long as you know what you're in for.

But it really, really applies when I say that Killing Them Softy (based on the book Cogan's Trade by George V. Higgins) is not for everyone. What is being sold as an action/thriller with Brad Pitt as a leather-jacket-clad hit-man is really not that at all. What the film most certainly is…is angry.

To sum up, two low-level hoods knock off a card game overseen by Markie (Ray Liotta). Jackie Cogan (Brad Pitt) is brought in to knock off the two hoods as well as the mastermind behind the scheme.

Does this actually happen? I can’t really say, but that’s not the point. What, on the surface, looks like a gritty revenge suspenseful-thriller is actually a very angry film about the economy, and the government’s handling of the bail out, and how, basically, those at the top responsible for his whole mess walked away from the affair unscathed. Some reviews have labeled the film as anti-Obama, and while I can see how that thought might be raised, I would disagree. I suppose the film would have to be anti-Obama in some unavoidable respects, being as how he is a part of the political machine, and he was one of those who signed-off on the bail out. But really, the film is anti-government. It’s anti-bullshit. And it’s very much anti-pretending that we’re all one community of people who care for each other, because our society proves again and again that we’re not. In the aftermath of Hurricanes Katrina and Sandy, and much earlier, 9/11, yes, our community got together and saved lives and helped people and even dug out rubble. We donated money and goods and we all felt really good about ourselves. But the things that divide us on a daily basis – politics, religion, incomes – crept back up to make us remember why it is we simply can’t get along with others.

Really what you have in Killing Them Softy is a message that’s simple: If somebody steals your money, you fucking kill them. Forget about due process, because something as massive and deludedly infallible as the government has proven it doesn’t have the honor and sack it takes to fix the problem. This is eye for an eye revisited.

Killing Them Softly comes from Andrew Dominik, screenwriter/director of The Assassination of Jesse James by the Coward Robert Ford (also starring Brad Pitt) – another film from Dominik’s body of work that I absolutely adore, which is another of his films that did not find the kind of success or attention it deserved. Dominik took the story of one of America’s most beloved outlaws, removed all the glamour and gimmick and godliness that’s been attached to him over the years, and instead presented you with a broken-down man, surrounded by family and friends, but ultimately alone. His life of crime left him constantly wanted by the law and constantly on the run, and he was left in a place where there wasn’t a single soul he could trust.

Killing Them Softly is incredibly well-acted, with James Gandolfini’s aging hit-man, Mickey, having all the best lines, while Scoot McNairy (of the incredible Monsters) gets to be a part of the most effective and suspenseful scenes in the film, including the robbery that starts this whole mess.

Don't expect non-stop violence (though the film is violent) and action set-pieces. What you can expect is a lot of anger towards our leaders and towards our society. What you can expect is a reflection on life – our own specific lives, as well as the one we share as a community. And you can expect to leave the theater with a wry smile on your face, knowing that it took a bunch of Boston hoods and hit-men to be more openly honest about what is they want, what they’re willing to do to get it, and to what means those affected will resort in order to get it all back—and that’s more than you can say for those allegedly looking out for the American people.

Plus, it's actually pretty funny.